Is gas really better than coal for the climate? 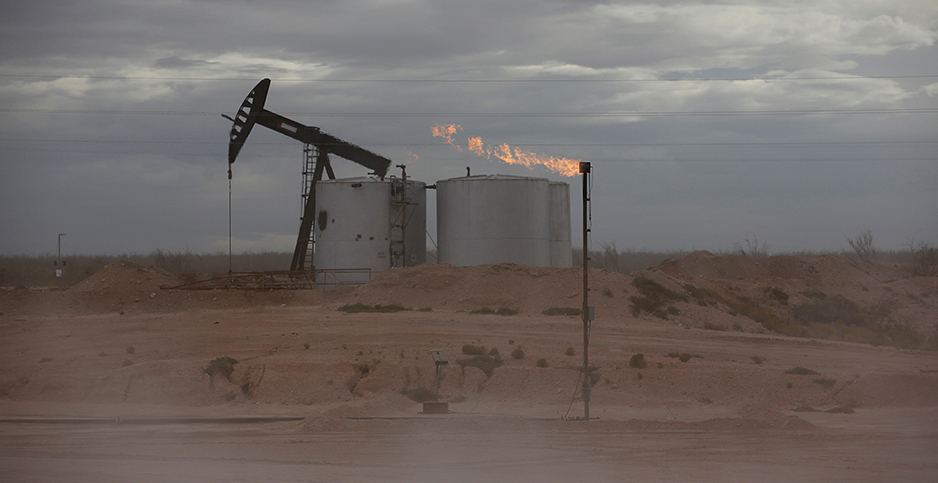 Methane emissions from gas flares like this one in the Permian Basin could negate the climate benefits of switching from coal to natural gas. Angus Mordant/Reuters/Newscom

America’s carbon dioxide emissions have fallen consistently over the last 15 years in large part because power companies have swapped coal for natural gas. Now it appears that those CO2 reductions might be smaller than previously thought.

A recent study by the Environmental Defense Fund found that 3.7% of natural gas produced in the Permian Basin leaked into the atmosphere. That’s enough to erase the greenhouse gas benefits of quitting coal for gas in the near term.

"The first thing to say is the 3.7% number really jumps off the page," said Daniel Raimi, a researcher at Resources for the Future. "It is a really high emission rate. It is yet another indicator that the U.S. oil and gas system emits more than current EPA estimates would suggest."

The study by EDF is significant on several fronts. Methane, the primary component of natural gas, produces about half the emissions of coal when burned, but it’s a much more powerful greenhouse gas when leaked into the atmosphere.

Scientists have long struggled to pinpoint just how much methane is being released into the atmosphere. A series of earlier studies coordinated by EDF and hundreds of other researchers indicated that the U.S. oil and gas system leaked on average 2.3% of all the gas it produced. That’s about 60% more than the leakage rate reported by EPA, at 1.4%.

Until recently, the Permian Basin had been a missing piece of the methane puzzle. The basin, which extends from West Texas into southeastern New Mexico, is the beating heart of the American oil patch. The Permian now accounts for about 30% of U.S. oil production and 10% of the country’s gas output.

The extent of the region’s methane emissions had been an open question. EDF’s newest study used a satellite operated by the European Space Agency to collect data on methane emissions from the basin between May 2018 to March 2019. It concluded that wells in the Permian were leaking enough gas to supply 7 million homes in Texas (Energywire, April 23).

The finding has far-reaching implications. U.S. carbon dioxide emissions fell 12% between 2005 and 2019, according to the Rhodium Group, an independent consulting firm. Much of that decline was driven by the greening of America’s power plants and the growing use of natural gas in particular. The Energy Department estimates that coal to gas switching is responsible for roughly two-thirds of the emissions reductions from power plants between 2005 and 2018.

But high rates of methane emissions from basins like the Permian erode the greenhouse gas reductions achieved when power companies swap coal for gas. A previous EDF study concluded that gas burned to generate electricity loses its climate benefits in the near term relative to coal when the leakage rate along the supply chain exceeds 2.7% of production.

"There is no need for this pollution. It is just completely unnecessary," said Steve Hamburg, chief scientist for EDF, noting the technology to curb methane leaks is widely available.

EDF’s finding comes with caveats. For one thing, emissions rates vary widely by basin. Gas fields like the Marcellus and Haynesville tend to have lower emissions because companies are drilling for gas. Their business model is centered around capturing and selling methane — not letting it leak into the atmosphere.

The story is different in regions like the Bakken and Permian, where companies are searching for oil. In those regions, gas is a byproduct of oil production. Companies often choose to burn the gas off into the atmosphere, a practice known as flaring, rather than investing in pipelines, compressor stations and other infrastructure needed to capture it.

The problem is particularly acute in the Permian, where oil production dates back a century and much of the gas infrastructure is old and leaky.

Those differences mean the climate impact from natural gas vary by region, said Arvind Ravikumar, a professor of energy engineering at Harrisburg University who studies emissions from the oil and gas sector. Gas from the Marcellus in the northeastern U.S. likely has a smaller impact on the climate than gas from the Permian.

"When we think about the benefits of using natural gas, we usually talk in national average. I think that masks a lot of nuances in this issue," Ravikumar said. "There are basins where methane emissions are a real problem, whereas there are basins where it is not as much of a problem."

The analyses by EPA and EDF differ in important ways. Federal emission projections are based on a "bottom-up" approach, which relies on estimates of how much oil and gas equipment leaks over time.

Comparing the climate impact of methane and CO2 is also difficult. Methane is a relatively short-lived gas, staying in the atmosphere for roughly a decade, while carbon dioxide can stay in the atmosphere for hundreds of years. In practical terms, that means generating electricity from natural gas can have a greater climate impact in the short term than coal in the short term if leakage rates are high but less impact in the long run.

The difference is central to the industry’s criticism of EDF’s research.

Energy In Depth, a project of the Independent Petroleum Association of America, has questioned EDF’s use of "technology warming potential" (TWP), the environmental group’s metric for measuring the climate impact of one technology versus another. Global warming potential, a more commonly used metric for assessing a gas’s climate impact, measures the effect of a single pulse of emissions over a 100-year period.

Nicole Jacobs, a spokeswoman for Energy In Depth, pointed to other peer-reviewed studies that found leakage rates of between 5-9% were needed to negate gas’s advantage over coal.

"EDF’s use of TWP is an outlier in the scientific community to the extent that I don’t think it’s even an available option in [life cycle assessment] calculating software," Jacobs said in an email.

"The key is the leakage is not inherent," Hamburg said. "We have all the ability and technology to reduce it by far more than an order of magnitude. This is not inevitable. There are cost-effective strategies for doing it. It’s about paying attention and making the necessary investments."

The oil and gas industry has sought to make emissions reductions associated with gas a chief selling point in recent years. On Earth Day this year, the American Petroleum Institute put out a press release touting American emission reductions produced by gas. It was headlined with a 2013 quote from former President Obama, saying that "the natural gas boom has led to cleaner power."

"Reducing methane intensity from oil and gas production emissions to near zero is a key priority for OGCI," Julien Perez, the group’s vice president of policy and strategy, said in a statement. "That is why our member companies decided to lead the industry in setting a standard that would ensure that gas can play a role in reducing emissions now as it replaces coal and increasingly supports renewables — and in the long-term as it enables the emergence of a zero-carbon hydrogen economy."

Raimi, of Resources for the Future, said that burning gas instead of coal is likely a net benefit to the climate.

But he noted that the comparison ignores a wider point: Electricity generation accounts for roughly a third of total gas consumption. The advent of hydraulic fracturing and horizontal drilling has unleashed a wave of cheap oil and gas, spurring an increase in consumption of both fuels, he said.

"That is where I worry more about losing benefits of coal-to-gas switching because that encourages increased consumption," Raimi said. "The suite of technological advances in the industry have increased emissions in aggregate even if we’ve reduced emissions in the power sector."

Correction: An earlier version of this story misstated the year the Oil and Gas Climate Initiative created an investment fund to help curb methane emissions. It was 2016.