Is George Mason the new Trump U? 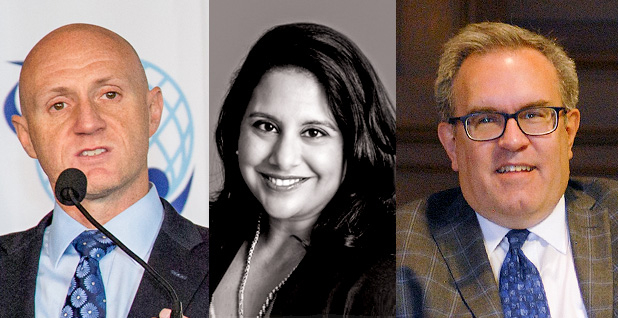 President Obama was known for nominating graduates of Harvard Law School, his alma mater, for top posts in his administration.

Less known is that several key figures in the Trump administration have ties to an idyllic campus in suburban Virginia, just outside Washington, D.C.

George Mason University — founded in 1949 as a branch of the University of Virginia — is home to the Mercatus Center, a free-market-oriented think tank that has produced several top Trump officials.

They include Brian Blasé, an assistant to the president for health care policy; Hester Maria Peirce, a member of the Securities and Exchange Commission; and Jerry Ellig, chief economist at the Federal Communications Commission.

Several key players on energy and the environment have also spent time on the university’s main campus in Fairfax County, Va., which consists of several hundred acres, or one of GMU’s satellite facilities.

Daniel Simmons, the Department of Energy’s acting renewable chief, was formerly a research fellow at Mercatus. And Neomi Rao, head of the White House Office of Information and Regulatory Affairs, taught at the GMU law school — named after late Supreme Court Justice Antonin Scalia — and founded its Center for the Study of the Administrative State.

The latest Trump administration official who once cheered for the George Mason Patriots is Andrew Wheeler, who became EPA acting administrator after Scott Pruitt resigned amid a cloud of ethics scandals.

Wheeler completed a Master of Business Administration at GMU’s business school, after receiving his Bachelor of Arts in English and biology from Case Western Reserve University and his law degree from Washington University in St. Louis, according to his resume.

Progressives take issue with the apparent pipeline between George Mason and the administration. They say it demonstrates the influence of fossil fuel billionaires Charles and David Koch, whose foundation has donated millions of dollars to the university.

In a report last year, left-leaning watchdog Public Citizen identified 44 Trump officials with "close ties" to the Kochs, including Rao and Blasé.

"Broadly, we think that government should reflect the public interest, rather than the brothers who control a giant fossil fuel company in Kansas," said Alan Zibel, research director of Public Citizen’s Corporate Presidency project and author of the report.

"The crazy thing is that this is a public university," Zibel said of George Mason. "They’re essentially taking it over and making it into a think tank for corporate interests."

James Broughel, a research fellow at Mercatus, said he’s proud of the connection between GMU and the administration’s highest offices.

"We’re proud that the administration seems to think that some of the best minds in the country come from George Mason," Broughel said. "It’s a sign of our influence. It’s a sign of the quality of the research and faculty."

The Mercatus Center — with offices in Arlington, Va., closer to Washington — has humble origins.

In 1980, Richard Fink, then a professor at Rutgers University, brought to George Mason the Center for the Study of Market Processes, which originally just supported a class of four undergraduate students.

But as the university grew in stature, the center began attracting some of the biggest names in free-market economics, including Gordon Tullock and future Nobel Memorial Prize in Economic Sciences winner James McGill Buchanan.

In 1999, during the end of the Clinton administration, leaders renamed the center Mercatus, after the Latin word for "markets."

The following decades saw the narrative of Mercatus becoming intertwined with Charles and David Koch, the two sons of industrialist Fred Koch, who own the majority of Koch Industries Inc., the second-largest private company in the United States.

In her book "Democracy in Chains: The Deep History of the Radical Right’s Stealth Plan for America," historian Nancy MacLean details how Buchanan developed a plan to wrest control of academia from the center-left.

The Koch brothers were only too eager to support Buchanan’s plan, pouring millions into right-leaning educational institutions. From 1999 to 2004, Mercatus received $1.44 million from the Koch family’s charitable foundations.

"One of the motivating forces for groups like the Koch brothers is that for years and years, conservatives complained that universities were handmaidens of the liberal establishment," said Christopher Loss, an associate professor of public policy and higher education at Vanderbilt University.

"They complained that organizations like the Brookings Institution and the Ford Foundation provided vast sums of money to the liberal university establishment," Loss said.

Brian Hooks became executive director and chief operating officer of Mercatus in 2005. About nine years later, Hooks left to become president of the Charles Koch Foundation and the Charles Koch Institute, a position he continues to hold today.

Mercatus went on to become a key player in the national conversation on regulatory policy. The Wall Street Journal has called Mercatus "the most important think tank you’ve never heard of."

The center describes itself as "the world’s premier university source for market-oriented ideas."

Proponents of a free-market system argue that the economy should operate without government interference. While they don’t categorically oppose government regulation, they’re generally skeptical of what they view as burdensome or duplicative rules on the books.

"Our goal is really to get certain ideas out into the general consciousness. Ideas about freedom and prosperity and what contributes to a prosperous, flourishing society," explained Broughel. "I would say that we have a strong belief in markets and their ability to generate prosperity."

Marc Morris, a spokesman for the university, said he doubts Wheeler interacted much with Mercatus during his time on campus.

"I looked into our records about Andrew and it doesn’t look like he did anything with Mercatus," Morris said in an email. "That being said, I wasn’t here when he was in school and Mercatus was so small back then, but I have my doubts that they would support an MBA student because most of our scholarships are for Economics."

Some Trump appointees, however, have made no secret of embracing the center’s ideals.

Rao wasn’t formally associated with Mercatus while at the university. But she frequently argues that unnecessary regulations can hamper economic growth and individual liberty.

And in a speech to the conservative Heritage Foundation last year, she called for rule rollbacks to become part of the federal culture (E&E News PM, Oct. 4, 2017).

"We’re pushing agencies to identify as many deregulatory actions as possible," Rao said. "We’re working hard to fundamentally change the culture at agencies so that they’re thinking first and foremost about how to reduce costs and lift burdens."

Simmons, who was tapped by President Trump to lead the Department of Energy’s renewable arm, graduated from the Antonin Scalia Law School and served as a research fellow at Mercatus.

In 2013, Simmons wrote a post in support of a Mercatus paper on how "federal regulations discourage renewable energy development."

More recently, Simmons was grilled by Democrats on Capitol Hill over his past jobs at Mercatus and the conservative Institute for Energy Research (E&E Daily, June 27).

The nominee to lead DOE’s Office of Energy Efficiency and Renewable Energy sought to dispel lawmakers’ concerns that he would "slow walk" regulations.

Last year, student group Transparent GMU sued the university and its fundraising foundation after it was denied requests for documents on gifts from the Charles Koch Foundation.

After a court hearing, the university released those documents, which showed that the Koch Foundation’s donations had come with strings attached.

In particular, the foundation had been given a role in hiring faculty members in the economics department, the records show. The appointments were steered toward professors who, like the Kochs, embraced the principles of a free-market system.

The documents were originally requested through the Freedom of Information Act by Samantha Parsons, who co-founded the group UnKoch My Campus as a George Mason student in 2014. The group seeks to expose the Koch brothers’ influence at colleges and universities around the country.

Parsons said in an interview that she worries that the Koch brothers have succeeded in planting right-wing ideologues in the upper echelons of the administration.

"Charles Koch and members of the Charles Koch Foundation have been very clear that their university investments are meant to support a talent pipeline of professors and students in gaining access to influential political positions," she said. "The number of influential GMU figures in the Trump administration demonstrates that Koch’s strategy is absolutely working."

Manuel "Manley" Johnson, who served as the Koch Chair in International Economics at GMU from 1977 to 1994, expressed pride in the university’s stamp on the administration.

"I am proud of the fact that GMU has produced many distinguished faculty and alumni that have held important policy positions in the federal government," said Johnson, who now serves as co-chairman and senior partner at consulting firm Johnson Smick International Inc., in an email.