Is Hickenlooper a ‘favorite son’ of oil? It’s complicated 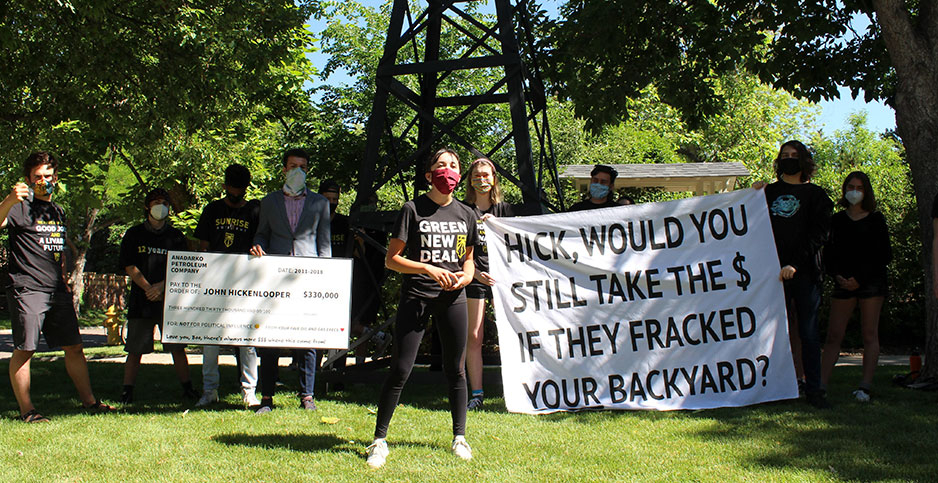 Activists with the Sunrise Movement protesting outside John Hickenlooper's house in June. Hickenlooper later won the Democratic primary race for the Senate. @SunriseMvmtCO/Twitter

Former Gov. John Hickenlooper had just announced he would jump into Colorado’s Senate race when the money started rolling in — some of it green, some of it oily.

Within 24 hours, the senior vice president of an oil exploration firm and the CEO of a midstream services company had cut checks to the fossil fuel-friendly Democrat. They were followed by an oil heiress. It was no surprise; a few months earlier, the former head of the Colorado Oil & Gas Association had donated to Hickenlooper’s ill-fated presidential campaign.

Meanwhile, Hickenlooper was also collecting money from a senior official from the World Resources Institute, followed soon after by an energy expert whose firm helped craft House Democrats’ climate plan. More money from climate advocates and green industry would follow.

Over the past two years, Hickenlooper has drawn campaign donations from heavyweights on all sides of the climate debate — though the balance tilts decidedly toward fossil fuels.

The sums are relatively modest compared with the oil and gas donations flowing to his opponent, Republican Sen. Cory Gardner. But they nevertheless signal that Hickenlooper, a former petroleum geologist, would have one of the closest relationships to the oil and gas industry in the Senate Democratic Caucus — a dynamic that has buoyed his moderate appeal while distressing some climate hawks, who now have to fit him into their best-case scenario plans for passing aggressive legislation through the Senate.

Hickenlooper says he’s taking a balanced approach to climate. During his short-lived presidential campaign, he spoke against socialist policies and dismissed the Green New Deal as unrealistic. He instead emphasized his record of regulating methane emissions and shuttering coal plants, while safeguarding Colorado’s boom in hydraulic fracturing.

He scored a commanding 17-percentage-point victory this month over his primary opponent, Andrew Romanoff, who had pledged to reject large fossil fuel donations. Hickenlooper declined to match that pledge, saying he already rejects donations from corporate political action committees.

"I’m the one that got the oil and gas industry, compelled them to create methane regulations. They’re spending $60 million a year [to comply]. I’m not sure I’m their favorite son," Hickenlooper said during a primary debate (Climatewire, June 17).

Oil and gas donors have given Hickenlooper about $95,000 this cycle, more than any other Democratic Senate candidate, according to the Center for Responsive Politics. He’s raised about $14 million total.

The clean energy sector — which typically donates about 20 times less than oil and gas — has given Hickenlooper about $7,000, according to the same database. That puts him outside the top 25 Senate recipients for that industry’s money, below climate skeptics like Sens. Jim Inhofe (R-Okla.) and Mitch McConnell (R-Ky.).

Hickenlooper has also accepted at least $7,800 from climate advocates and other sustainability-oriented firms, according to an E&E analysis of campaign finance data.

Gardner, meanwhile, has gotten more money from both sectors: about $478,000 from oil and gas and $17,550 from clean energy, according to the Center for Responsive Politics. Gardner has more cash on hand than Hickenlooper, but the former governor raised more money in the most recent quarter.

Both Gardner and Hickenlooper have cast themselves as climate moderates who can work with energy producers as well as conservationists. But Gardner’s record is significantly more fossil fuel-friendly.

Gardner helped secure Senate passage of the "Great American Outdoors Act," a bill to fund parks and conservation programs, after he voted to confirm virtually all the Trump administration’s Interior Department and EPA nominees who had promised to cut climate regulations. He’s also helped strike down some of those policies himself, such as the Obama administration’s methane regulations. Gardner’s 2017 vote to gut that rule blocked the federal government from ever creating a similar regulation for methane, a greenhouse gas dozens of times more potent than carbon dioxide that’s often vented or leaked from oil and gas operations.

Hickenlooper has made his 2014 methane regulations, the first issued by any state, a centerpiece of his climate pitch, though activists also point out that he repeatedly quashed local and statewide efforts to significantly restrict fracking. In the Senate, Hickenlooper says, he would push for expanding electric vehicle infrastructure and greater research funding.

Hickenlooper’s fundraising numbers reflect his centrist record, as well as the Centennial State’s dual booms of fracking and renewables, said Srinivas Parinandi, a political science professor at the University of Colorado, Boulder, who tracks the energy sector.

"Colorado is a state where both renewables and fossil fuels are extremely influential," Parinandi said. "Both sides matter at a local level."

He added that Colorado’s oil and gas industry has been successful at turning out voters, even as it has been especially sensitive to its environmental reputation.

"The oil and gas industry — and oil and gas workers specifically — they tend to turn out," he said.

"They’re really politically mobilized here. And they’ve tried really hard, I think, to get some Democrats on their side in order to prevent high renewable mandates, more restrictions on where they can drill, things like that."

Much of Hickenlooper’s oil money comes from executives and senior officials, a contrast to some other progressives who received donations from lower-level oil workers.

For instance, Sen. Bernie Sanders (I-Vt.) pledged to reject donations from fossil fuel executives in his Senate and presidential campaigns — but he still received more than $240,000 from the industry, according to the Center for Responsive Politics. Nearly all of those were small-dollar contributions.

Stacy Schusterman, an Oklahoma oil heiress and CEO of Samson Energy, also donated $5,600 to Hickenlooper’s Senate campaign, the maximum for both the primary and general elections.

Samuel Gary, a retired oilman and philanthropist who was the Denver Petroleum Club’s 1968 "Man of the Year," gave the maximum $2,800 to Hickenlooper’s presidential run.

Another maxed-out donor to Hickenlooper’s Senate campaign was Noble Energy’s Kate Fay, who worked for the Obama administration’s EPA before joining the oil and gas company. Fay, who now works as a consultant, had helped Noble implement Hickenlooper’s methane regulations, according to a biography on CU Boulder’s website.

On the other side, Hickenlooper got a $2,800 donation from Michael Haas, the CEO of Orion Renewable Energy Group and the founder of the Alliance for Climate Education.

He also got $2,800 from John Hereford, a partner at Oak Leaf Energy Partners, a renewable development and investment firm.

Hickenlooper got $1,500 from Hal Harvey, CEO of the policy firm Energy Innovation, which provided modeling for the House Select Committee on the Climate Crisis’ policy framework released last month.

"It’s important to support candidates who are serious about cutting emissions, and that’s why I donated to John Hickenlooper," Harvey said in a statement to E&E News.