Is Inslee the climate choice? First he must pass something 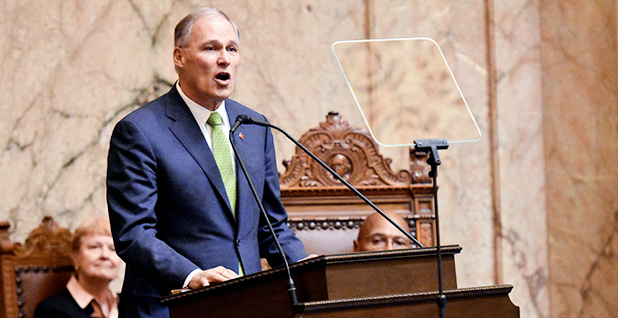 Here’s the problem: Despite decades advocating for climate action, he has endured spectacular failures while achieving just a few minor victories.

The Waxman-Markey bill, a cap-and-trade proposal Inslee championed in Congress, passed in the House but failed in the Senate. His 2016 rule aimed at curbing emissions from large emitters in Washington state is gummed up in the courts. And the governor has suffered a pair of high-profile defeats in his attempts to pass a carbon tax, both in the Legislature and at the ballot box (Climatewire, Nov. 7, 2018).

It’s unclear whether any of that matters for Inslee’s electoral prospects. If Inslee can’t claim a landmark climate victory, neither can his likely competitors in the Democratic primary race. And while other White House hopefuls claim to be concerned about climate change, few are as well-versed in the issue as the Washington governor.

There’s also this: It’s not clear that climate change is a priority for Democratic voters, at least when compared with myriad other issues, like growing economic inequality, civil rights and just about anything related to President Trump’s alleged ties to Russia.

"Look, I think he’s led on climate change for a while. People who follow the issue know that," said Joe Trippi, a Democratic strategist who managed former Vermont Gov. Howard Dean’s presidential campaign in 2004. "The bigger problem is a whole lot of people don’t know who Jay Inslee is yet or that he is identified with the issue."

What’s clear is that Inslee’s presidential ambitions have raised the political stakes for this year’s legislative session in Olympia, the Washington capital. The governor has proposed a slate of climate policies aimed at slashing emissions 25 percent, or 16 million tons, by 2035. The proposals include 100 percent carbon-free electricity by 2045, a low-carbon fuel standard and a revamped building code (Climatewire, Dec. 11, 2018).

The pressure on Inslee is growing, and not just because he is planning a presidential bid.

A recent report by state regulators showed that greenhouse gas levels in Washington increased 6.1 percent between 2012 and 2015. That brought state carbon emissions to 97.4 million metric tons, or about 8 percent above 1990 levels. State law requires Washington to bring greenhouse gases in line with 1990 levels by 2020 and cut them 25 percent by 2035.

Allies defended Inslee’s record, noting he has been thwarted by Republican control of the state Senate through much of his gubernatorial tenure. But he can’t use that excuse any longer; Democrats gained Senate control in 2018. That makes this year a crucial test for the governor, who likely has the best chance of his political career of enacting many of his priorities.

"He is clearly staking his presidential aspirations on being the climate change champion, and this year’s legislative session is really important to that," said Gregg Small, executive director of Climate Solutions, an environmental group that focuses on climate policy in the Pacific Northwest. "I am more optimistic about progress in the Washington state Legislature on climate and clean energy this year than I have been in more than a decade."

The governor’s critics say his actions have rarely lived up to his rhetoric. Inslee has failed to persuade his own party to act on his agenda, said Todd Myers, who leads the conservative Washington Policy Center’s environmental program. Inslee proposed a carbon tax in 2018, when Democrats controlled both chambers of the Legislature, but the measure never made it to the floor of either body.

"He is comfortable talking about climate change and climate policy, but that rhetoric hasn’t turned into results, even in Washington state," Myers said. "Environmental awareness is very high here. Support for left-wing environmental policy is very high. I think that makes the failure all the more stark."

There was an abbreviated legislative session last year in Olympia, where lawmakers meet for extended sessions every other year.

Jamal Raad, an Inslee spokesman, touted the governor’s record, noting he has led opposition to oil and coal export terminals proposed for the Washington coast, while directing more money to clean energy research and electric vehicles. He also sought to frame the governor’s losses as a positive, noting the oil industry spent more than $31 million to defeat last year’s ballot measure on a carbon tax.

Inslee signaled his intention to run for president in a Jan. 2 interview with The Atlantic. The governor is scheduled to appear in New Hampshire next week, where he will host a pair of climate-themed talks and appear at a fundraiser for the League of Conservation Voters.

Paul Hodes, a former New Hampshire congressman who is hosting Inslee at the LCV event, said Inslee has an opening to press his climate case in the Granite State, where Democrats are particularly attuned to environmental issues. He said Inslee has an advantage over his competitors: his passion for climate action.

Still, he said, policy pitches only figure to get a candidate so far in a primary campaign overshadowed by Trump.

"I don’t think it is going to be an issue-driven campaign," Hodes said. "The primary issue is how do we save our country from a delusional, authoritarian narcissist."

Inslee will have competition for the title of climate champion. Vermont Sen. Bernie Sanders (I) has long called for 100 percent renewable energy. And there is already jockeying among Democrats to hone their climate message to win over green voters (Climatewire, Jan. 17).

Inslee allies say the governor figures to have a leg up on the competition when it comes to climate voters. The governor benefits from widespread name recognition and credibility among green activists.

"What a lot of the environmental community is hoping [for] … is someone with a long history of committment on this issue," said Nick Abraham, communications director for Washington Conservation Voters and a veteran of last year’s carbon tax campaign. "There are lots of Democrats who don’t know a solar panel from a toaster oven but are out there talking like they care about this issue. Inslee’s not that guy. He’s so steeped in the actual technical issues of how to create a clean energy economy. He’s done a lot of good things here, and he just hasn’t had the support from the Legislature."

Ultimately, the real value of Inslee’s campaign may not be whether he wins or loses, but how successful he is in elevating climate as a Democratic priority, said Trippi.

He pointed to Dean’s 2004 run as example. The Vermont governor fell well short of receiving the Democratic nomination, but he succeeded in pushing the party left on the Iraq War, gay marriage and health care, Trippi said.

"I think his candidacy will move the issue to the forefront in a way it hasn’t been for a while," he said of Inslee. "It’s a candidacy to watch."