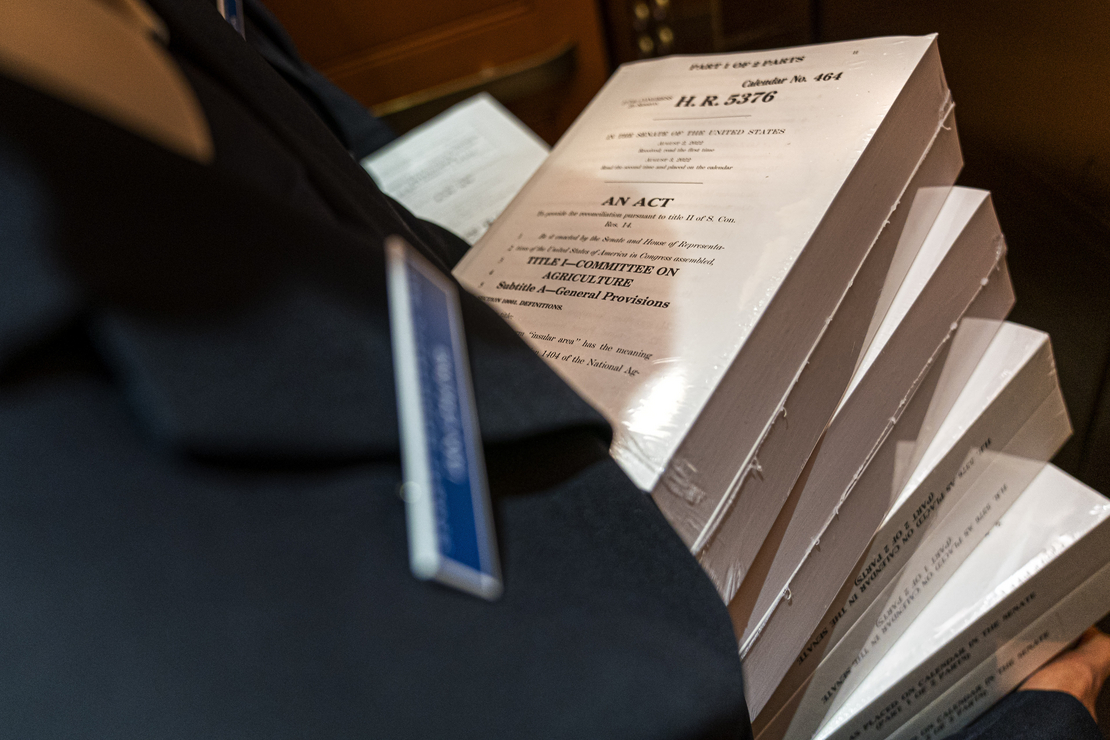 A page holds copies of the Inflation Reduction Act in an elevator inside the Capitol on Sept. 7 in Washington. AP Photo/Jacquelyn Martin

But climate advocates haven’t settled on how to refer to the massive climate and health care law that Democrats have dubbed the Inflation Reduction Act.

President Joe Biden prefers to say all seven syllables of Inflation Reduction Act. Some of his top officials have used the abbreviation “I.R.A,” while others pronounce it “eye-ra.”

Jenkins likes “Ira” because “it rolls off the tongue better, it doesn’t connote the Irish Republican Army, and it is a bit more ‘personified,’” he said.

The Irish Republican Army, known to many by its acronym, was a paramilitary group that pursued an end to British rule of Northern Ireland, often through bombings in England and Northern Ireland. Thousands died during the conflict.

Paul Bledsoe, a strategic adviser at the Progressive Policy Institute who worked on climate change in the Clinton White House, also pronounces it Ira. But he prefers to call it the “clean energy and health care bill,” he said, because the branding is clearer.

Despite the efforts of politicians and their staffers to brand their bills with catchy names that will appeal to the public, the official name of a piece of legislation doesn’t always stick. Take the Affordable Care Act, former President Barack Obama’s signature health care law that became popularly known as “Obamacare.”

That nickname was originally used by critics of the law, but was later embraced by Democrats.

When naming legislation, “your large goal is to make sure you don’t get self-owned by coming up with an acronym that your opponents can make fun of,” said Jim Manley, a Democratic strategist who served as an aide to the late Senate Majority Leader Harry Reid (D-Nev.).

A Google search of “IRA” yields a trove of results about individual retirement accounts and a link to a Wikipedia page about the Irish Republican Army. It’s not until the second page of search results that text of the Inflation Reduction Act pops up.

The I.R.A. acronym still seems to be the dominant pronunciation over Ira among administration officials.

White House aide John Podesta, who’s leading the implementation of the new law, referred to it as the I.R.A. in an Oct. 5 press conference, as did Deputy Treasury Secretary Wally Adeyemo.

But politicians and White House aides can only do so much when it comes to branding, Manley said.

“You do the best job you can to try to put together the best-named bill possible, but in the end it’s up to social media and the zeitgeist to decide whether it makes sense or not,” Manley said.