Is John Dingell the ‘dean of Twitter’? ‘Yooouuuu betcha!’ 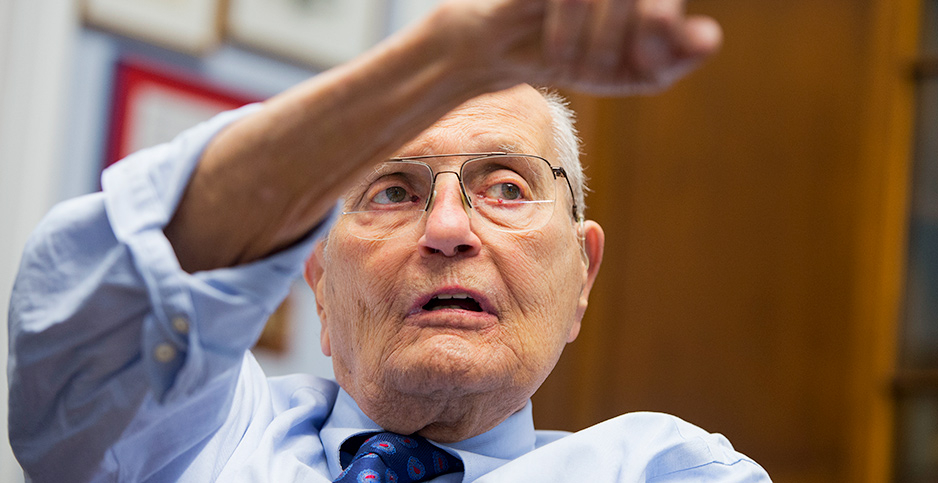 At 91, John Dingell doesn’t get around the way he used to, so he’s letting his fingers do the walking — and the talking.

The legendary Michigan congressman has turned himself into the self-styled "dean of Twitter," tapping tart tweets for 239,000 followers.

One thing hasn’t changed: Just as he did during his record-setting 30-term run in the House of Representatives, Dingell speaks his mind.

"When something needs to be said," the gravelly-voiced Dingell declared in an interview from his home in Dearborn, Mich., "I say it."

In his book, "The Dean: The Best Seat in the House, from FDR to Obama," slated to come out in early July, Dingell will spin tales of his more than 59 years on Capitol Hill. He’s also sounding the alarm about the Trump administration’s handling of energy and environmental issues.

Dingell — who was known for terrifying witnesses who dared cross him during congressional hearings — now says he’s "scared to death" about what President Trump and EPA Administrator Scott Pruitt might do to landmark environmental laws he played a leading role in crafting decades ago. When the Clean Water Act, Clean Air Act and National Environmental Policy Act (NEPA) passed with bipartisan support, the Michigan Democrat was in the thick of the scrum.

"Our beloved friend Mr. Pruitt thinks he’s going to remake the whole damn thing, but he can’t do it," Dingell said. "He can’t rewrite the law on water pollution. He’s going to wind up with a mountain of paper, it’s going to be an unholy damn mess. And he’s going to have a huge problem in trying to meet NEPA."

John David Dingell Jr. first came to Washington at the tender age of 6 when his father was sworn in to serve Michigan’s 15th District. The elder Dingell held the seat for 22 years before his death in 1955, leading to a special election in which his son would win the seat he would hold for almost six decades. His wife, Democrat Debbie Dingell, a former General Motors Co. executive, succeeded him.

Throughout the years, John Dingell emerged as a champion of environmental protection while drawing criticism from some greens for his defense of gun rights and his backing for the auto industry. But he also supported the Obama administration’s efforts in 2012 to improve clean car standards, with the League of Conservation Voters hailing him as "an important voice on environmental priorities for decades" upon his announced retirement four years ago.

He’s best known for chairing or serving as the top Democrat on the powerful Energy and Commerce Committee for nearly three decades, until he was ousted by former Rep. Henry Waxman (D-Calif.) in 2008 over fears he would slow-walk legislation to tackle climate change.

Dingell recently talked to E&E News about that pivotal election, the threat of climate change and his crowd-pleasing tweets.

May I call you congressman?

You can call me any damn thing you want as long as you do it with a smile.

How are you keeping busy?

I read, I Twitter, I talk to friends on the phone, I meet in discussions, I go to an occasional party or gathering, I meet with people I know and love, people come by and visit me, I travel a little — mostly between Washington and the district that is now represented by the lovely Deborah, my wife. I spend a lot of time reading about what’s going on in the world.

Do you write your own tweets?

For the most part, I write my own. I’m just learning how to Twitter because I never did it before. I have fun with it.

Do you support the Trump administration’s decision to revise and potentially freeze Obama-era clean car rules?

I don’t know what the standard will look like when it comes out. But what I do know is this: It needs to have the data to back it up. And I believe [retired Michigan Democratic Sen.] Carl Levin and I did the right thing to ensure there was a midterm review of the original standard. I’m old enough to know circumstances and technology change.

Your wife said at a recent hearing she believes it’s important to have a single national fuel efficiency program. Do you agree?

What accomplishments are you most proud of?

I did my best. I did my work. … I’ve taken care of my people. I walk down the street, and people run to shake my hand and say, "Mr. Dingell, we appreciate what you’ve done for us, and we wouldn’t have health care if it weren’t for you." They’re grateful and kind and wonderful people. I think that’s my legacy.

You helped enact many bedrock environmental laws. Is your work threatened by this administration?

You betcha! Yooouuuu betcha! I’m scared to death of what this man in the White House is going to do, and equally scared to death about the clown that he put into EPA. Scott Pruitt is a positive threat to anything going on. He’s a dangerous man.

Is NEPA vulnerable under the Trump administration?

If you look at what Trump has done, Trump has not filled hardly a job. The end result is you have this huge array of empty jobs in every area of government, I don’t care if it’s law enforcement or environment or Food and Drug [Administration] or NEPA or the handling of the different problems that they’ve got on immigration or whatever it might happen to be.

Nobody understands how the hell this is going to be addressed. This is one of the most complex scientific problems that we’ve got in the world. It covers every nation, it covers the oceans, it covers the land masses, it covers different kinds of economies and nations, and everybody’s trying to deal with it, but nobody knows exactly what in the hell they have to do to make the situation come to a head and get it done to the point where there’s a decision.

You’ve said the Clean Air Act was not intended to regulate greenhouse gases. Do you still believe that?

It was not the intention of the Congress to have greenhouse gases be regulated by the Clean Air Act. Republicans and Democrats and everybody in the Congress was of clear decision that it could not be used to regulate, the Clean Air Act. It will have a huge impact on clean air, and that’s very, very important because you reduce CO2 or methane or any of these other things other than things that are the product of global warming. The courts came up with some crazy idea that it did cover these substances as pollutants when in fact they’re not.

Is there a policy solution for tackling climate change?

First of all, we haven’t got a policy. Second of all, we don’t know what we all have to do. Third of all, developing countries all want to develop the lands so they can have the good things you and I have got.

If you had been chairman of the House Energy and Commerce Committee in 2008, would we have cap and trade?

And now we no longer have regular order, we no longer have the committee system, and you’ve got guys like Trump coming who know nothing about anything. He knows more about making a shoe than he does about writing a tax law. But he’s writing tax laws. I wouldn’t trust his silly ass to pour piss out of a boot if the instructions were written on the heel.