Is pipeline construction ‘essential’ in a pandemic? 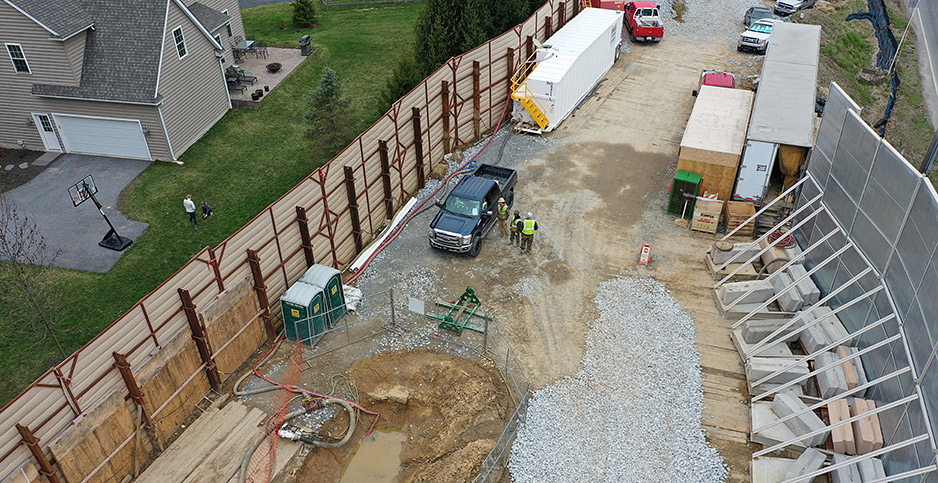 Just off the Pennsylvania Turnpike west of Harrisburg, a trench has been cut nearly halfway across Appalachian Drive for a pipeline, called Mariner East 2.

Gov. Tom Wolf (D) has ordered a temporary halt to all business that isn’t "life sustaining," and much of the pipeline work in the state is shutting down. But work here will continue for a little more than a month. Wolf last night granted pipeline owner Energy Transfer Partners a waiver so it can finish laying pipe and reopen the road.

It’s one of 17 sites in Pennsylvania where Wolf granted the company’s request for waivers from the shutdown, intended to slow the spread of the coronavirus pandemic. The company told Wolf that walking away from the projects now could endanger public safety or the environment. For example, boreholes that have been drilled could collapse, causing problems underground.

Opponents are calling foul, saying Energy Transfer and other companies are racing to finish projects while protest proceedings are stalled by pandemic measures. Foes of the Keystone XL pipeline in the Great Plains and the Mountain Valley pipeline in Virginia are also demanding an end to activity on those projects.

The pipeline fight highlights a growing debate over what type of energy work is "essential" during a public health crisis.

Is it essential, for example, to build pipelines to keep communities moving toward improved energy and manufacturing? Or is that just keeping multinational oil companies on their profit schedule? If pipeline construction is not essential, then how important is it to have employees monitoring and maintaining the sites?

Coal, natural gas and renewable energy raise similar questions. Shale gas production has been deemed "life-sustaining" in Pennsylvania. Wolf at first ordered coal mines to be shut down, then reversed the next day and deemed them "essential." In other states, renewable energy companies are trying to determine if they’re covered by shutdown orders.

The debate reflects that energy is vital to nearly everyone — but producing and moving it is often dangerous, disruptive and therefore controversial.

"The American public depends on affordable and reliable energy for heating and cooling our homes or fueling our cars and trucks," said John Stoody, an executive with the Association of Oil Pipe Lines. "Pipeline projects help keep supplies plentiful and allow families and workers to benefit from lower prices."

Opponents say that ignores the damage they do to the environment and the danger they can pose to people who live and work nearby (Energywire, Feb. 18). Eric Friedman is among them. Mariner East construction runs through his neighborhood, and Energy Transfer got a waiver for horizontal drilling to continue there to prevent flooding from "groundwater that is surfacing."

At the same time, Energy Transfer has cited the pandemic in seeking to delay activity in a complaint case before the state Public Utility Commission. Friedman says the company wants to accelerate construction while stalling opponents.

"I’ve seen them do this for years now," Friedman said.

‘No right to ignore the public danger’

Energy Transfer’s waiver requests said the company is suspending construction across the state in line with the governor’s order. But it successfully sought a 10-day extension at all of its sites in Pennsylvania to wind down operations. The 17 sites where it wants permission to keep going beyond that include the Mariner East road crossing near Harrisburg, Friedman’s neighborhood and another area where a landslide led to an explosion on the company’s Revolution pipeline in 2018 (Energywire, Jan. 6).

The company says it needs to keep going because boreholes that have been drilled could collapse, open pits and trenches are dangerous to the public, and one of the projects ties in to a drilling project Wolf has deemed "sustaining." At the explosion site, the company notes that the state Department of Environmental Protection has said the work should continue to reduce a danger to the public.

The Mariner East project, reportedly more than 90% complete, had 46 horizontal boring projects approved or underway last week when Wolf issued his shutdown order, according to one of the waiver requests.

In a statement last night, Energy Transfer said that its construction crews have been instructed to observe "social distancing" and other measures recommended by health officials to hinder the spread of coronavirus. The company’s operating pipelines had already been deemed life-sustaining, along with oil and gas production.

"We have updated our protocols to remain diligent in keeping our employees, contractors and community residents safe and healthy while working on our property and within our pipeline rights-of-way," the statement said.

In Virginia and West Virginia, construction is suspended on the Mountain Valley pipeline (MVP) due to legal challenges by environmental groups (Energywire, Oct. 17, 2019). But the developer, a joint venture led by EQT Corp., says shutdown orders allow work to continue, and it is focusing on maintaining erosion and sediment control measures.

That angers Elizabeth Struthers Malbon of Blacksburg, Va., who complained to the Federal Energy Regulatory Commission that the developer is continuing to bring in temporary workers.

"MVP and FERC have no right to ignore the public danger to citizens who live in the vicinity" of the pipeline, she said in a comment posted on the FERC docket this week. A spokeswoman for the pipeline did not respond to a request for comment.

In another case, Bold Nebraska, which has led opposition to the Keystone XL pipeline, has started a petition to demand that developer TC Energy Corp. (formerly TransCanada Corp.) "cancel" activity on the line because of the pandemic.

Representatives of TC Energy did not respond to a phone message seeking comment.