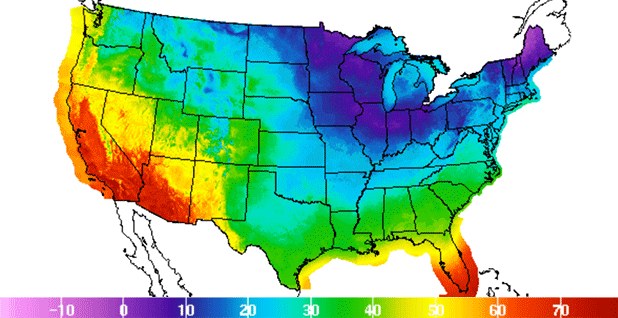 Yesterday’s forecast showed much of the United States facing high temperatures in the teens and 20s. NOAA

As temperatures plunge, the politically packed terms "polar vortex" and now "polar vortex 2.0" are making the rounds in blogs, social media and national headlines, as are "weather bomb" and "bombogenesis."

While that colorful weather jargon remains murky, energy lobbying groups are making it crystal clear that the ensuing cold spell will be a talking point — as it was when temperatures cratered four years ago — in pushing the Trump administration’s proposal for subsidizing struggling nuclear and coal plants.

Coal boosters are already hailing the "historic deep freeze" gripping the eastern United States, from Nebraska to New England, as proof that grid operators are reliant on their product.

Ahead of the looming storm and possible record-setting temperature drops, Luke Popovich, spokesman for the National Mining Association, said heavier use of coal in the Midwest and Mid-Atlantic gives credence to the Trump administration’s request to throw his industry a policy lifeline. The Federal Energy Regulatory Commission is slated to decide the fate of that request next week.

"All a reminder to FERC commissioners that coal shines when temperatures plunge," Popovich wrote in a blog post today. "Polar Vortex 2.0 was just the exclamation point to an otherwise good year for coal if not for its detractors."

The nuclear industry is also beating its chest.

The Nuclear Energy Institute reported all 99 of the nation’s reactors are running, hailing it as an "incredible but unsurprising testament" to the industry’s reliability and resilience, all while moderating electricity prices. And after pointing out that many natural gas and coal plants struggled during the polar vortex of 2014, Exelon Corp., which operates the largest nuclear fleet in the United States, said its plants are chugging along at full steam.

While grid operators in the Midwest and Mid-Atlantic — armed with lessons from the 2014 polar vortex — have reported ample power reserves with no disruptions, meteorologists are eyeing possible record-breaking cold later this week (Climatewire, Jan. 3). That could spell trouble for exposed pipelines, coal piles and other energy-related structures.

But just how big a role are coal and nuclear playing in boosting reliability? What role are market reforms playing?

How big a punch will winter pack for the Eastern grid, pipelines and coal plants in coming days, and just what exactly is the role of the polar vortex? Also, what the heck is "bombogenesis"?

Is this the polar vortex at work?

The polar vortex — a term that skryocketed in popularity in 2014 — refers to an ever-present area of low pressure and cold air looming over the Earth’s poles that strengthens in winter months, sending cold air southward with the jet stream.

The polar vortex is "always in place and has always been in place; it’s a feature that’s always spinning around the northern latitude and northern circle," said Carl Erickson, a senior meteorologist with AccuWeather. "There are pieces of it that split off. Right now, there’s a dip in the jet stream; a chunk of that’s come down into the eastern nation."

Four years ago, the wide expanse of swirling cold air, dipped south, bringing with it extreme subfreezing temperatures that crippled parts of the grid. The deep freeze forced the outage of more than 17,700 megawatts of generating capacity at one point (Energywire, Oct. 1, 2014).

But today, the center of the polar vortex isn’t positioned across the United States and isn’t reaching as far south, according to Bob Oravec, a lead forecaster with the National Weather Service.

The circulation is actually in northern Canada. There is, however, a persistent pattern of arctic air moving from northwestern Canada into the southeastern United States, bringing with it a stream of cold air that has sent temperatures plunging east of the Rockies.

"You can get really cold temperatures without having a polar vortex driving everything," Oravec said. "We have big arctic outbreaks into the Lower 48, and that’s the pattern we’re stuck in right now."

What’s a ‘bomb cyclone,’ and is it headed toward the East Coast?

Meteorologists say a monster storm will hammer the Atlantic coast from Georgia to Maine starting today. By tomorrow, an "exploding storm" akin to a "winter hurricane" will blast the East Coast.

Jason Samenow, a meteorologist and weather editor at The Washington Post, said the terms "weather bomb" and "bomb cyclone" are appropriate, given that the pressure is expected to fall fast and the storm to strengthen quickly, possibly ranking as the region’s most intense in decades.

As for other terminology?

"Some people have nicknames. Usually, a ‘cyclogenesis’ takes shape; some people term it ‘bombogenesis,’" AccuWeather’s Erickson said. "All it means is that the storm is rapidly intensifying there, and pressures dropped very quickly when you hear those terms."

How’s the grid holding up?

While PJM Interconnection, which oversees the grid in parts of the Mid-Atlantic and Midwest, has issued cold weather alerts and urged generation plants to take extra caution throughout the week, the grid operator has also said power supplies and reserves are sufficient.

Chris Pilong, the organization’s dispatch director, said Sunday’s temperatures didn’t even register among the top 10 in terms of load. Six of the all-time top 10 days for load in PJM were during the polar vortex in January 2014.

Utilities that were warned about the closure of coal and nuclear plants following the 2014 polar vortex are also faring well so far.

"The polar vortex of 2014 was relentlessly cold for about three days: Temps dropped very suddenly, and it was preceded by wet and snowy conditions," said Melissa McHenry, a spokeswoman for AEP. "The current weather is more similar to weather experienced later in January 2014, which was much more manageable."

Is coal getting a boost?

In some areas, yes.

PJM this week has relied more heavily on coal-fired power plants, as was the case during the polar vortex of 2014. Yesterday afternoon, 39 percent of the grid operator’s generation was coming from coal, outpacing natural gas and nuclear power.

"An increase in residential and commercial gas usage, as well as in power generation, drives up gas prices," Pilong said. "At some point, coal and oil can actually become more economically efficient to run."

That’s true, too, in New England, where oil rather than coal is the generation source that grid operators lean on during the high natural gas demand periods.

Is that a win for Perry’s grid proposal?

An uptick in coal usage has led to headlines such as one in the Washington Examiner claiming, "Coal to the rescue as record cold grips the East."

That narrative could lend credence to claims that coal — along with other "baseload" power sources, including nuclear — is key to maintaining reliability, an argument that is central to a controversial Trump administration policy proposal championed by Energy Secretary Rick Perry to bolster struggling coal and nuclear plants.

But renewable advocates also claim the polar vortex as a bragging right.

Wind power overperformed and saved consumers billions of dollars at the peak of the polar vortex of 2014, as far as Greg Wetstone, CEO of the American Council on Renewable Energy, is concerned.

"I think the reality is that when we’ve had real resilience issues, renewables have been there," Wetstone said. "I don’t see how you could possibly say that in cold weather circumstances, there’s any data that suggests that coal is coming to the rescue."