Is Pruitt good for the environment? He thinks so 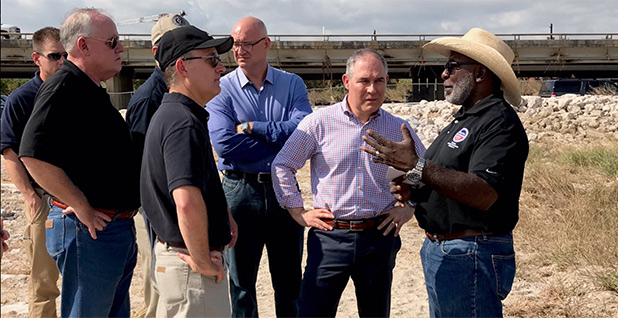 Scott Pruitt is trying to change his image.

The U.S. EPA chief has been pilloried by Democrats and environmentalists who say he’s gutted environmental regulations, gotten too cozy with the industries he’s charged with policing, tried to weaken EPA through budget cuts and pulled environmental cops from enforcement work to serve as his around-the-clock bodyguards.

Now Pruitt’s fighting back in what appears to be a concerted effort to paint himself as an environmental enforcer.

"I don’t spend any time with polluters. I prosecute polluters," he told Time in an interview earlier this month when he was asked about criticisms surrounding his industry-friendly approach.

In a separate interview this month with Bloomberg, Pruitt vowed "to go after bad actors and go after polluters." He said of his critics, "They don’t know me. … I’ve led a grand jury. We are going to do enforcement."

A day later on Twitter, he posted a photo of himself addressing EPA’s criminal enforcement investigators who he said were "working hard to ensure bad actors are held accountable."

The post came shortly after an EPA official revealed that most of the criminal investigators who had been tasked to Pruitt’s security detail were returning to their regular enforcement jobs (Greenwire, Oct. 20). Pruitt came under fire from critics after special agents were pulled from the criminal enforcement staff to help fill in the gaps in his 24/7 security detail — unprecedented coverage for an EPA administrator.

The recent batch of interviews and social media posts portraying Pruitt as an EPA chief who’s tough on polluters comes after months of Pruitt describing himself as a defender of EPA’s "core mission" of protecting clean air and water.

From his first day in office, Pruitt sought to depict himself as someone who would refocus an agency that had overstretched itself tackling climate change, support state authority to regulate the environment and return EPA to focusing on conventional pollutants.

"Before he was confirmed, Administrator Pruitt said that he planned to enforce environmental laws and hold those that violate them accountable," said EPA spokesman Jahan Wilcox.

Some of his supporters think he’s gotten a bad rap.

"He’s been going after brownfields and toxic waste sites. Of course a lot more needs to be done, but that’s where the EPA should focus, and he’s looking at practical environmental solutions," said Ed Russo, a former environmental consultant for the Trump Organization and the author of "Donald J. Trump: An Environmental Hero."

Russo said environmentalists have been paying too much attention to climate change and that the "climate’s always changing." Instead, he said, "the focus should be on reducing pollution" and cleaning up hazards like "toxic waste dumps."

Still, plenty of Pruitt’s foes in the environmental world doubt his sincerity.

"You would expect someone in that job would try to find a couple of easy things so he can confuse the bigger picture," said Frank O’Donnell, the president of the nonprofit Clean Air Watch.

While Pruitt has made much of his "back-to-basics" agenda, O’Donnell said there was no evidence to support that the Obama administration’s climate focus hurt the agency’s efforts to control more conventional air pollutants like soot and smog.

O’Donnell also said that the climate regulations Pruitt is working on undoing would also have slashed other pollutants. The Clean Power Plan — an Obama-era rule to cut power plants’ emissions — would reduce smog-forming pollutants, and regulations on methane would cut pollutants that form ozone.

"Pruitt’s rhetoric sounds nice, but I don’t see it has done anything positive at all," said O’Donnell.

Even as he’s railed against EPA’s overreach in certain areas — including climate change rules — one of the few areas where Pruitt has maintained EPA hasn’t been active enough is cleaning up toxic waste.

Pruitt has zeroed in on the Gold King mine spill in 2015, which sent 3 million gallons of heavy-metal-contaminated water into the Animas River. The EPA boss has frequently criticized the Obama administration for the spill in interviews, calling the former president "no environmental savior." The administrator announced this summer that EPA would reconsider certain tort claims previously rejected by the Obama administration (Greenwire, Aug. 7).

He has also emphasized Superfund sites, many of which have been slated for cleanup for years or even decades. Early on, Pruitt focused on finding ways to streamline the process of working through the country’s most contaminated areas more quickly, setting up a task force and saying he would take charge of projects costing $50 million or more (Greenwire, May 11).

"Communities across the country are counting on each of us to get this done right and as expeditiously as possible, and we will," Pruitt said in a memo to staff in July.

Winston Porter, a former head of EPA’s Superfund office who helped get the program started under President Reagan, said in an interview that Pruitt was on the "right track" with his approach to Superfund remediation.

"I’m fairly pleased with what he is doing on Superfund," Porter told E&E News. "I was impressed when I first read that he was going to get personally involved with Superfund."

Some of his critics, meanwhile, say they’re worried that hastening cleanups could mean they’re not done properly.

One problem with Superfund in the past has been that cleanup efforts haven’t been championed by senior staff at the agency, and authority over sites has been pushed lower and lower within the ranks at the agency, Porter said. That has slowed progress and left areas contaminated in some cases for decades.

Other reasons cleanups lag, according to Porter, are bureaucratic red tape and time spent on minutiae and detailed studies. Site managers have also been slow to act on their end. In an op-ed he penned in The Hill last month, Porter noted that Superfund can be a moneymaker for lawyers and consultants who benefit from having the sites linger.

"I think you have a tough little management problem when you are dealing with this stuff. And the people being screwed are people living near these sites," he said. "What you really need is someone who can look at all the information and talk to people at the site and decide what is a good, cost-effective remedy."

But Pruitt himself likely will not have the time to directly lead this effort, and more of that management could fall to two or three other people in the Superfund and regional offices, Porter said. Pruitt will need to name a manager for the program to help get the work done.

One of the Superfund sites Pruitt has singled out early on has been the USS Lead site in East Chicago, Ind. Pruitt visited there this spring where he met with Gov. Eric Holcomb (R) and Sens. Joe Donnelly (D) and Todd Young (R). The politicians did not respond to specific questions about what progress had been made with the site since then but noted their appreciation for Pruitt’s involvement.

In a statement to E&E News, Donnelly said cleanup efforts have been a team effort involving EPA’s Region 5 office, the Department of Housing and Urban Development, Indiana’s state government, the mayor’s office, and others.

"I appreciated Administrator Pruitt’s visit to East Chicago to see firsthand the challenges these Hoosiers are facing. This situation remains full of complex challenges that will require a long-term effort," Donnelly said. "This community needs, and these families deserve, our fullest commitment going forward."

Earlier this month, EPA announced a plan to clean up the toxic chemical dioxin that’s leaking from the San Jacinto River Waste Pits in Harris County, Texas, which has been on EPA’s National Priorities List for nearly a decade. The site flooded when Hurricane Harvey hit in September, leaking the cancer-causing chemicals into the San Jacinto River (Greenwire, Oct. 12).

Pruitt has also touted his commitment to "cooperative federalism," which he says hands more authority back to state environmental regulators.

"Many environmental statutes empower the states to serve as stewards of their lands and environments," Pruitt wrote in an Oct. 16 memo to EPA’s assistant and regional administrators. "Embracing federalism, EPA can work cooperatively with states to encourage regulations instead of compelling them, and to respect the separation of powers."

One way he wants to do that is by speeding up the agency’s process for approving state implementation plans, known as SIPs, for federal regulations. These are federally enforceable plans that lay out how states will meet and maintain pollution reductions.

At the end of fiscal 2016, EPA had a backlog of 322 state implementation plans for national air pollution standards, according to a recent EPA report noting regulations that the Trump administration says unduly burden the development of domestic energy production. According to the report, EPA is planning to eliminate that backlog and streamline its methods for approving state plans through a "nationally consistent process" that sets performance targets and provides better monitoring for progress on SIP reviews.

Clint Woods, executive director of the Association of Air Pollution Control Agencies — a group of regulators — said both the Obama and Trump administrations had worked to improve the process for developing state-based plans, and there had been signs that this was an important issue for the current EPA.

According to Woods, state regulators want more guidance from EPA on how to revise their state plans.

"Not knowing the rules of the road of what is required of their SIP revisions, that has been a real impediment to getting those approvals," Woods said. "For states, their internal process may take as long as a year, lots of time and effort and modeling, and it ends up being hundreds or thousands of pages of revisions."

"Frankly, I haven’t seen much change in how EPA works with the state so far," said Michael Dowd, director of the air division at the Virginia Department of Environmental Quality.

He added that the state had always had a good relationship with its EPA regional office counterpart.

Karen Hays, chief of the air protection branch at Georgia’s Environmental Protection Division, noted that EPA had been working since the Obama administration to cut down on the SIP backlog.

"They had made significant progress before the administration change, and the process continues," Hays said.

She added that over the next year as the agency gains more staff, its direction will become more evident.

"Clearly they are looking at how we can all work together," she said. "It’s really early days in how they want EPA to run."