Is Pruitt still on ‘thin ice’? 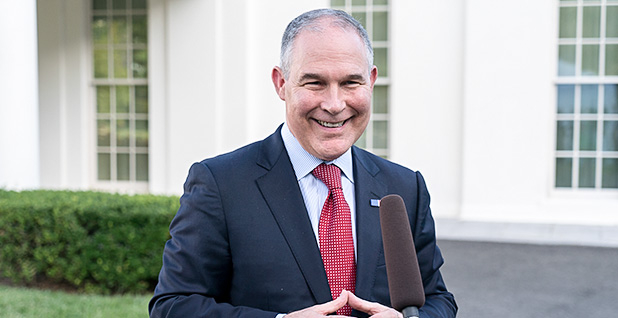 Scott Pruitt survived a day of grueling public attacks by his critics yesterday, but his performance may not be enough to guarantee long-term job security.

The EPA administrator deflected and denied allegations about numerous ethical missteps during two Capitol Hill hearings that had originally been scheduled to focus on the Trump administration’s budget request. While many of Pruitt’s defenders off the Hill thought his status improved after the hearings, some said it was only in a relative sense. Congressional Republicans were also less than impressed with the administrator’s responses, finding his answers vague (see related story).

Pruitt "remained calm" during rounds of "aggressive and accusatory" questions, said Dan Eberhart, CEO of oil field services company Canary LLC and a major GOP donor. But that might not be enough to save his job.

"Pruitt is hanging onto his job by a couple of fingers at this point," he said.

President Trump is known for placing a high premium on televised conduct, so many viewed the hearings as a watershed moment for an EPA chief facing multiple investigations from Congress, the White House and the EPA Office of Inspector General.

Pruitt didn’t attract a barrage of negative post-hearing headlines. Cable networks largely focused on the fallout from Trump’s nominee to run the Department of Veterans Affairs withdrawing, a guilty verdict in the sexual assault charges against comedian Bill Cosby and the confirmation of Secretary of State Mike Pompeo.

Republicans largely avoided addressing the spending, personnel and conflict-of-interest allegations that have plagued Pruitt in recent weeks. Pruitt largely kept his cool, despite Democrats’ attempts to rile the EPA boss.

"Dems are a mere shadow of what they had once been," said a Republican former EPA official who’s now a lobbyist. "Sounding like an old man, but back in my day, the minority party would have been coordinated and built their questions off of each other. This was a particularly poor showing for them since they had the Republicans also feeling some kinda way about Pruitt."

But others saw a boss unwilling to take responsibility for various missteps at his own agency. They said the hedging and blame-casting reflected poorly on someone expected to exhibit leadership.

To some, Pruitt’s demeanor threatened to exacerbate tensions with the White House, where distrust is already significant. Some within the administration are privately discussing whether Andrew Wheeler, a former coal lobbyist and staffer for Sen. Jim Inhofe (R-Okla.) whom the Senate confirmed this month as Pruitt’s deputy, will take over in the coming days.

"I think [Pruitt is] on extremely thin ice at the moment," said an industry source. "The people who are now supposedly supporting him really love Andy Wheeler, too, so I don’t think he’s as safe as people might think."

Pruitt has faced a battery of accusations unrelated to policy measures. He’s under fire for renting a condo for $50 per night from the wife of an energy lobbyist who lobbied the agency, spending $43,000 on a soundproof phone booth, approving sizable pay raises for two aides despite White House objection, traveling first class on domestic flights, mixing personal travel with business, questionable real estate deals dating back to his time in Oklahoma politics, reassigning personnel who pushed back on spending decisions and expanding his security detail to unprecedented levels, among other things.

"I think the Administrator offered clear insight on some of the thorny issues currently pending before the Agency," Scott Segal, a lobbyist who represents energy clients at Bracewell LLP, said in an email. "On the more personal issues, he exhibited some real grace under pressure. He finished stronger than he started."

Pruitt was calm but indignant throughout the hearings.

"Those who have attacked the EPA and attacked me are doing so because they want to derail the president’s agenda. I’m not going to let that happen." Pruitt said. "A lie doesn’t become true just because it appears on the front page of the newspaper."

"Administrator Pruitt performed very well at his hearing," Huelskamp said. "He told the truth that his political enemies are attacking him and President Trump because Pruitt has been so effective in implementing the agenda voters chose in the 2016 election. He’s ended the war on coal, canceled the Clean Power Plan, stopped the implementation of unworkable CAFE [corporate average fuel economy] standards, reversed the abuse of the waters of the U.S., and now is ending ‘secret science’ at EPA. No wonder he’s under constant attack by the radical left."

Despite the recent headlines, Pruitt is widely thought to still have his job at EPA due to industry’s widespread support for his deregulatory actions. In fact, GOP lawmakers yesterday insisted Democratic attacks and media stories outlining Pruitt’s alleged misdeeds are a reaction to his implementation of Trump’s energy and environment agenda.

"It’s shameful that this day has turned into a personal attack," Rep. Bill Johnson (R-Ohio) said at a House Energy and Commerce subcommittee hearing.

Industry officials came out swinging in defense of Pruitt. Those perspectives will be influential with Trump, who has courted energy-producing states and industries as a key part of his base.

"Administrator Pruitt has been the star of the Trump Administration," Murray Energy Corp. CEO Bob Murray said in a statement. "Indeed, he is taking the actions necessary to reverse the illegal and destructive regulations of the Obama Administration."