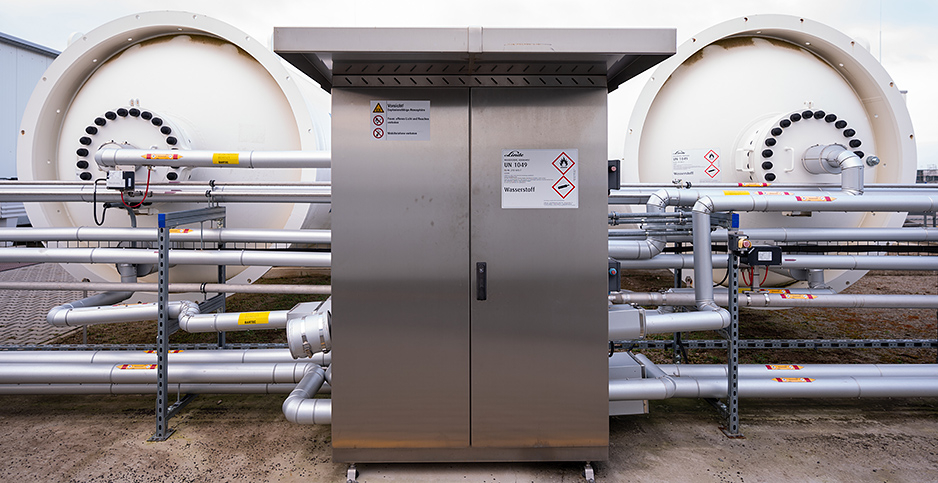 Hydrogen storage tanks are pictured at a wind-power-to-gas plant operated by Stadtwerke Mainz in Germany. Hydrogen produced from renewables represents only 1% of all hydrogen produced worldwide, according to the consultancy Wood Mackenzie. Andreas Arnold/dpa/picture-alliance/Newscom

In his clean energy plan last month, presumptive Democratic presidential nominee Joe Biden called for a ramp-up in research on renewable hydrogen, which in theory could be a transformative, emissions-free fuel source for everything from cars to cement making.

The moves, along with recent European projects, are highlighting a debate about whether renewable or "green" hydrogen — produced from carbon-free energy sources — is ready for prime time or is overhyped.

"People are anticipating there is going to be policy support…or that there will be a sufficient business case," said Kobad Bhavnagri, head of industrial decarbonization for Bloomberg New Energy Finance.

Recent research is adding to the buzz. In a note published last month, Morgan Stanley analysts wrote that renewable hydrogen — an element that energy researchers see as a prospective jack-of-all-trades for decarbonization — could become as cheap as traditional, fossil-fuel-derived kinds within the next two to three years.

The bank based that dramatic forecast on several assumptions. The cost and efficiency of electrolyzers, which can split hydrogen from water molecules using electricity from wind turbines or solar panels, would have to keep improving, it said. New federal or state subsidies for electrolyzers might be required. Perhaps most importantly, federal production tax credits for wind power would need to be extended again.

Hydrogen has long been made in the United States at scale by steam-reforming natural gas or coal. Bringing low-carbon hydrogen to cost parity with those types by 2023, as Morgan Stanley projects, would exceed the overall hydrogen industry’s estimates by several years.

The bank’s optimism reflects the mood of other energy analysts, who point to the outlays in European stimulus packages and a growing number of proposed projects worldwide in saying that the timeline for cheap green hydrogen could be closer than many assume.

Of the $54 billion approved worldwide for clean energy in stimulus packages this year, 19% of those funds were earmarked for hydrogen, according to a recent analysis by BloombergNEF. The European Union, which has provided the bulk of that green stimulus money, wants to deploy 40 gigawatts of electrolyzers by 2030 — about 10 GW more than the U.S. wind industry’s projected deployment of offshore turbines, for comparison.

The United States remains far behind the European Union, Australia and Japan in clean hydrogen plans and announced projects, Bhavnagri said. But as more countries unveil strategies to boost clean hydrogen, some U.S. states might increase their efforts to accelerate clean hydrogen production and bring down its costs, as well, he added.

"It certainly prods the forward-leaning states; California, New York, they’ll look at this and say, ‘OK, we need to accelerate to have a slice of the action,’" he said.

Even without policy supports, some companies with experience in Asia or Europe could increasingly try to make the leap to the United States, said Stefan Reichelstein, a Stanford University economist and hydrogen researcher.

"There’s no substitution for policy action in any given country. But there could be a spillover effect," he said.

But the idea of cheap renewable hydrogen in a few years "strikes me as a little optimistic," Reichelstein said, noting that Morgan Stanley based its projection on an unusually low cost of wind power.

Most industries probably won’t begin serious uptake of hydrogen technologies in the near term without government subsidies or stricter emissions regulations, Reichelstein said.

"Do they need to decarbonize? Are they facing emissions charges if they don’t decarbonize? That’s what it would take to move the needle," he said.

Biden would "ensure that the market can access green hydrogen at the same cost as conventional hydrogen within a decade — providing a new, clean fuel source for some existing power plants," the plan states.

While there’s no evidence that hydrogen investments of that kind would instantly create jobs, they could "pave the way" for future growth, Bhavnagri said.

"Hydrogen fits really well in the mold of building future useful infrastructure and infrastructure that will enable green growth," he said. "It’s not the best way to get the economy going instantly, but it’s a good way to build long-term infrastructure."

However, Biden tied funding for the idea to his "ARPA-C" concept, which would involve a new federal agency that some say would be redundant (Energywire, May 28). Others say different clean energy technologies are further along and deserve more federal funding.

In the meantime, hydrogen advocates say there are signs of policy action from states.

They point to commitments from 15 states and the District of Columbia to develop zero-emissions trucks by 2050, offering an opportunity for fuel cell vehicles. Hydrogen is often touted by transportation researchers as a potential carbon-free option for long-range trucks and other heavy classes of vehicle, since fuel cell versions are likely to refuel faster and travel farther than battery electrics.

In other cases, companies are announcing U.S. plans. In May, a bioenergy company reached a deal with a California city to build what it called the "world’s biggest green hydrogen production facility" (Energywire, May 20).

Yet as more initiatives are announced, a debate persists about which technologies would allow renewable hydrogen to most quickly reach commercial scale, cut emissions and balance the grid.

Some early projects, including Florida Power & Light’s, seek to pair electrolyzers with dedicated sources of solar or wind generation. Other researchers theorize that hydrogen facilities could draw electricity from the grid in areas with lots of wind power, stabilizing wind’s price on the wholesale market. Another pathway to zero-carbon hydrogen is biomass gasification, the conversion of organic materials or waste into carbon monoxide, hydrogen and CO2.

Perhaps the biggest disagreement lies in what role "blue" hydrogen should play.

Those who support blue hydrogen in conjunction with zero-carbon hydrogen say there are cost benefits. S&P Global Inc. estimated in March that blue hydrogen costs about $1.40 per kilogram, three times less expensive than the cost of producing green hydrogen.

"If you want to get large volumes of hydrogen in the near term, blue hydrogen would be where you start," he said.

Blue hydrogen supporters also say there is evidence that the technology could capture up to 90% of CO2 from hydrogen production.

Skeptics, however, question whether blue hydrogen should play a significant role in hydrogen production other than as a short-lived bridge to its greener form.

"I would prefer to leave the fossil in the ground and make the hydrogen all the other ways," said Jack Brouwer, director of the National Fuel Cell Research Center at the University of California, Irvine, citing the carbon emissions released from blue hydrogen and the abundance of renewable electricity and biomass.

Despite the buzz, it remains to be seen how much and how quickly the fuel will make its mark on the global clean energy landscape, with or without CCS. Proposals do not always translate into investments or actions, Bhavnagri said.

But as other major economies move forward with clean hydrogen plans motivated in part by the pandemic, it could only be a matter of time before the United States pivots, too, Bhavnagri said.

"If the Chinese comes to the party, then this is really happening. You’ve got the second and third biggest economies in the world heading in this direction," he said, referring to China and the European Union.

"The U.S. will have to get on board at some point in time. Otherwise, it’s left as a big outlier," he said.