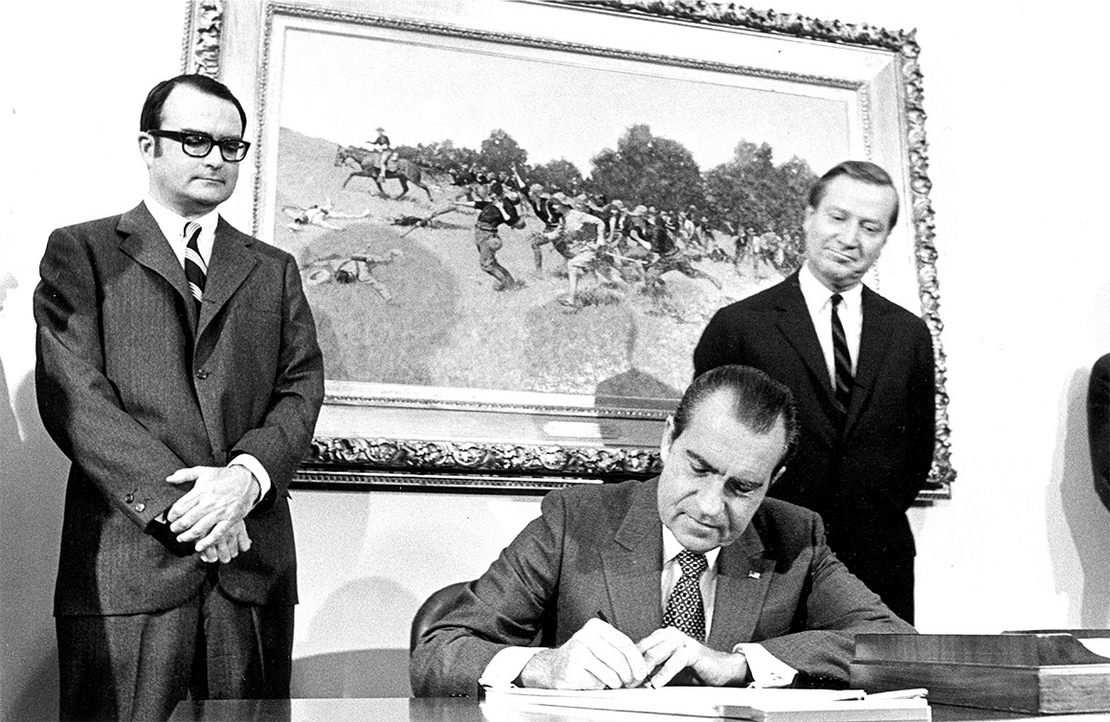 There’s a word Democrats keep throwing around to describe the “Inflation Reduction Act.”

“This was very, very important — and historic, many have said,” Vice President Kamala Harris said just after casting the tie-breaking vote to advance it through the Senate.

“This is a historic victory for the United States and the planet,” Sen. Brian Schatz (D-Hawaii) said in a statement Sunday.

Activists, scientists, trade associations, unions — all of them are using the H-word to describe the $369 billion in spending for climate change and energy programs in the “Inflation Reduction Act.”

In a literal sense, it’s true: This is a record amount of money for cutting U.S. climate pollution.

Historians themselves, though, are more circumspect about where this bill fits into the grand arc of history. The “Inflation Reduction Act” could possibly mark a turning point for American society, five historians told E&E News, propelling a transformation of the U.S. economy for a century or more.

If so, they said, it would deserve a place in the pantheon of historic environmental laws that have reshaped American life, alongside the Clean Air Act and the Clean Water Act — and it might surpass even them.

Or it could all fall flat, stymied by conservative opposition or market forces.

There are no guarantees, historians said, especially for complex and ambitious legislation like this. Its fate will depend on what happens after it leaves Congress and meets the challenges awaiting it in the real world.

“One lesson from the history of American energy is that there’s never been the passage of a bill and then everything was done,” said Paul Sabin, a professor of history at Yale University.

What the legislation actually accomplishes, he said, will be the subject of constant renegotiation between federal agencies, courts, state and local officials, and international market forces.

“We’re 40 or 50 years into the climate era — but we’re really still at the beginning,” Sabin said.

Time, nevertheless, is running short. Scientists say that avoiding the worst effects of climate change will require slashing global greenhouse gas emissions 50 percent by 2030. The “Inflation Reduction Act” is forecast to help the United States reach a 40 percent reduction by 2030.

There’s no true parallel for that pace of action in U.S. environmental or energy history, said John McNeill, a professor of history at Georgetown University.

In the 1970s, many of the bedrock environmental and consumer protection laws in the United States passed in a flurry of bills — numbering more than five dozen altogether.

That was an intensification of a yearslong trend, McNeill said, and the Clean Air Act and Clean Water Act transformed the U.S. regulatory regime “almost overnight.”

No energy system can change that quickly, he said. But the “Inflation Reduction Act” is the most significant attempt to decarbonize the power sector in U.S. history.

“If that happens — that’s a big if — this is of far greater historical importance than the intensified environmental regulatory regime that was put in place in 1970 to 73,” McNeill said.

“Because energy regimes are so fundamental to human existence — to the course of history, to economies, to health, to the distribution of power in the international system — all these things are at stake,” he added.

What’s already clear, historians said, is how different the “Inflation Reduction Act” is from past environmental laws that made history.

One is the nature of the legislation. Most bedrock environmental laws, like the Endangered Species Act, created or intensified regulatory regimes. The “Inflation Reduction Act” is instead a spending bill; funding and fees are virtually the only policies it changes.

That’s because Democrats had to fit their legislation into narrow taxing and spending parameters under budget reconciliation rules, which allowed them to bypass congressional Republican opposition.

That unified Republican opposition is another key difference. In the 1970s, Republican President Richard Nixon signed environmental bills that passed Congress with broad GOP support. Even the exception proved the rule: When Nixon vetoed the Clean Water Act, Congress overrode him hours later with bipartisan supermajorities.

By 1980, that bipartisan cooperation led Congress to pass almost 70 laws aimed at protecting the environment or consumers — including amendments to strengthen laws passed just a few years earlier.

That sheer amount of congressional action points to the other key difference from history. The “Inflation Reduction Act” is the culmination of three decades of Democrats trying and failing to pass substantial climate legislation. Few expect another chance to come soon.

Even those distinctions might undersell the difference between the “Inflation Reduction Act” and past environmental laws, said Adam Rome, a professor of history at the University at Buffalo.

“Climate change is a vastly more complicated, huge problem than air pollution or water pollution were,” he said. “No one [climate] bill — no matter how huge and how much money was in it — could singlehandedly eliminate a good bit of the problem, which is what Clean Air and the Clean Water Act did.”

To be sure, Congress has taken some smaller bites at climate — including in the past year under the bipartisan infrastructure deal and legislation boosting semiconductor manufacturing. And until the “Inflation Reduction Act” formally passes, the title of biggest congressional climate action still belongs to President Barack Obama’s stimulus bill, which directed about $90 billion to it.

In some ways, Rome said, the “Inflation Reduction Act” more closely resembles New Deal-era programs to electrify rural areas or even earlier efforts by the U.S. government to expand roads and canals in the 19th century.

The bill also closely resembles how the United States has handled energy policy in the past, Sabin said.

That’s a demonstration of how other policy models — like cap and trade — have failed politically, he said. But it also spotlights the risks of this current approach.

As the United States has moved from energy systems oriented around wood to coal to oil to gas, the emerging fuel has never quashed its competitors, he said. But that’s implicitly what Democrats are seeking now.

“The big challenge of this is that in the history of American policy … different fuel industries do not try to drive each other out of business,” Sabin said.

“What they do instead is they fight for their share of the pie — their subsidies, their interests. And that’s been true of wind and solar, too,” he continued. That shows “how different the climate situation is from previous energy policy circumstances, because just expanding the pie and rebalancing the fuel mix is not sufficient,” he said.

Some of those differences with past laws, though, might offer an advantage to the “Inflation Reduction Act,” said Jack E. Davis, a professor of history at the University of Florida.

The Clean Water Act has directed some $650 billion over its lifetime toward cleaning waterways. That has come with huge benefits, Davis said, but it’s also given opponents a big number to latch onto. Likewise, the Clean Air Act took decades before people noticed a change in the air.

Now, though, the economic benefits of climate action are in the foreground of the “Inflation Reduction Act,” he said. “I gotta hand it to Democrats for doing that with this bill,” he said.

He pointed to the Comprehensive Everglades Restoration Project, which in 2000 set aside more than $8 billion for recovery of South Florida’s ecosystem.

“It was noted as a historic moment,” he said. “That plan has borne virtually no fruit.”

That was very different legislation, he added, “but you have to be cautious — as a historian, you don’t call something historic in the moment.”