Is the fight in N.Y. really about climate change? 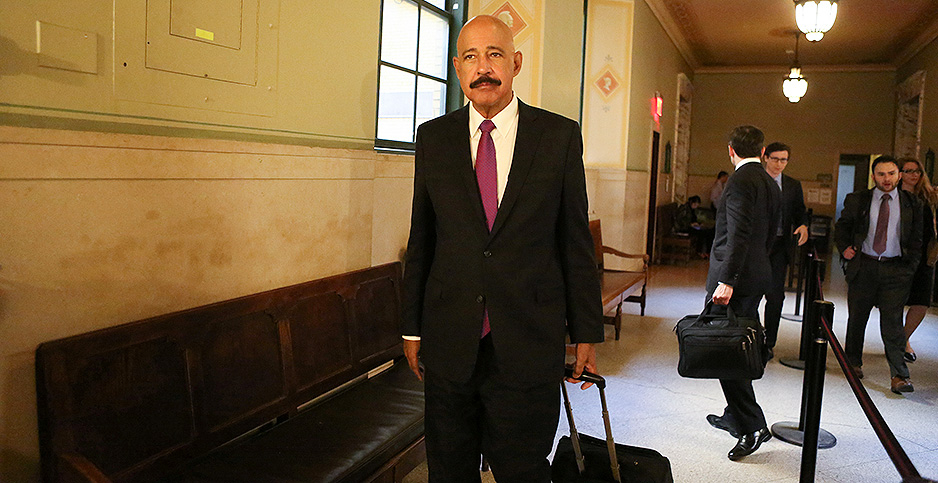 Activists have rallied around a high-profile trial over Exxon Mobil Corp.’s disclosures of carbon costs as a landmark legal battle on climate accountability. Attorneys for the company, meanwhile, insist that the case has nothing to do with climate.

They may both be right.

Legal experts have anticipated that the outcome of this case, built on the bones of an accounting lawsuit, could reverberate more for the climate movement than for the investor community. Court watchers also note that the case could serve as a key piece in the broader puzzle of how to push Big Oil to internalize the costs associated with a changing climate.

"Name me another balance sheet valuation issue that has gotten this much attention," said Ethan Powell, founder of the financial services nonprofit Impact Shares.

During a recent interview with E&E News, Powell drove through one of the physical manifestations of global climate change: $2 billion dollars’ worth of storm damage in Dallas.

It was an "appropriate setting," he said, to discuss a financial lawsuit that has gained notoriety because of the larger climate concerns that weave through the dispute.

"It’s dealing with a broader social issue that impacts everyone — and me directly because I just took an hour and a half to get downtown because tornadoes just ripped through Dallas," Powell said.

But the issues at the heart of the Exxon trial are also of "high importance" to investors and shouldn’t be dismissed, said Andrew Logan, director of the oil and gas program at Ceres, a nonprofit that advises investors on sustainability.

Exxon’s defense team has called investors who raised the first calls for climate disclosures "activist shareholders" with no real interest in buying stock other than to take a climate stand. Ceres sent a letter to Exxon and other industry players in 2014 to call for improved disclosure of climate risks, which helped spur the company to release the shareholder reports at issue in the case.

Logan said investors are not in this case simply to rock the boat.

"These are investors who have a real stake in the long-term financial success of the company, and they’re engaging in what sometimes feels like, I think, a thankless task because they want to see the company change for the better," he said.

Experts are split over what a victory for New York in the case would accomplish.

The company denies the claims.

Part of the Empire State’s argument hinges on materiality: the fact that Exxon’s risky investment decisions had a substantial impact on stock prices and corporate bottom lines, even though it told shareholders it was being more conservative in its decisionmaking.

But "the financial sector is already factoring that in," said Powell of Impact Shares, noting that the amount of money in environmental, social and governance, or ESG, strategies has reached $13 trillion in the United States.

"The practical reality is professionally managed money is already handicapping the valuations of these proven reserves on the balance sheet … and evaluating the attractiveness of the entire industry relative to long-term viability of fossil fuels," he said.

Through these strategies, financial managers and investors make decisions about stocks and purchases by considering salient social and environmental issues — like climate change — that could affect prices in years to come. Powell estimated that 1 in 4 "professionally managed dollars" is invested in an ESG strategy.

"What that tells me is that [the financial sector] cares about this, [the sector] is considering this in their allocation," Powell said. "And oftentimes the first thing that a foundation or endowment will do with their public equities is divest of fossil fuels."

The real challenge to disclosures, Powell said, stems from the Trump administration’s efforts to downplay the narrative of climate change in public company financial statements.

When the Securities and Exchange Commission changed its disclosure rules to require disclosure of only "material" risks, energy companies gained more leeway under the less-stringent obligations.

"What I’m getting back to is the energy industry’s ability to make really meaningful, significant changes through their lobbying efforts that no one ever hears or talks about," Powell said. "But the reality is the energy industry is winning in every backroom, creating much more change than even a possible victory in this case would."

If Exxon’s misleading disclosures have truly cost investors millions of dollars, then they have every right to head to court and press the company for damages, said Logan of Ceres.

And some investors cannot sell their oil and gas index stock — which may be wrapped up in their retirement accounts, for example — so Logan said it’s in their best interest to make sure the company is looking at long-term values and not investing in risky assets.

Beyond Exxon’s own interests, Logan said this case could have "high implications" for the industry at large and test whether states can scrutinize corporate climate disclosure in ways that the SEC "has been unwilling to."

Logan said he has heard other companies — with potential climate change disclosure issues of their own — express anger about this very public trial.

"Another company might have settled this issue; they might have taken a more conciliatory approach. That’s not the Exxon way," Logan said. "But I think what other companies are saying is: ‘This is hurting us, as well.’"

Pavel Molchanov, energy analyst at Raymond James & Associates, said a fine from New York would be "a drop in the proverbial bucket" for Exxon, but there are bigger ramifications for shareholders beyond the narrow question in this case.

Companies’ estimations of their future carbon-related liabilities and what costs they’ll incur could also emerge as issues for investors, he said. But the question remains hypothetical, he added, because widely adopted carbon regulations do not yet exist.

Exxon and other energy companies have been actively lobbying for carbon tax legislation in the United States, signing on to initiatives like the Climate Leadership Council that aim to reduce emissions by putting a price on carbon dioxide.

"Many oil and gas companies want clarity and predictability on carbon costs," Molchanov said. "So it might seem when we see an oil and gas company lobbying for a carbon tax … like the proverbial turkeys voting for Christmas, but there is actually logic to it."

He said many companies would "gladly" pay a manageable price on greenhouse gas emissions in order to have clarity on how carbon costs will affect business — and to avoid even more stringent measures.

"But the average investor in an oil and gas stock — Exxon or any other in this country — is not losing sleep today over climate issues," Molchanov said.

"And therefore, they’re not going to be losing sleep over this particular trial," he said.

Even with a narrow decision from New York Supreme Court Justice Barry Ostrager, who is presiding over the trial, a victory for James’ office could inform broader dialogue over fossil fuels companies’ handling of climate change.

But from a legal standpoint, it’s unclear whether this lawsuit could influence a separate set of climate nuisance cases that states and cities are waging in other parts of the country.

Sean Hecht of UCLA’s Emmett Institute on Climate Change and the Environment said New York’s calls for documentation on Exxon’s internal knowledge in this case echo the focus of the nuisance lawsuits, but the timelines are much different.

"In an evidentiary sense … it’s less clear what the evidence in this case is really going to mean that might be relevant to those other cases," Hecht said.

But he added that the impacts of a win for James could extend to Exxon’s investment decisionmaking.

"We might see Exxon having to document an internal decisionmaking process publicly where it would have to provide more justification of its decisions to invest in fossil fuel-intensive assets," he said.

"And that might make it less likely that they will be doing those kinds of investments in the future," he said.