Is there a (female) doctor in the House? Soon, Dems hope 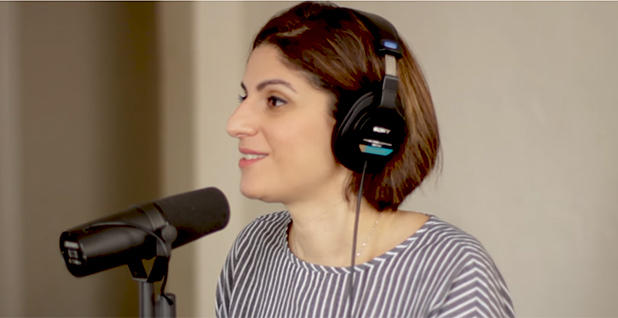 Nadia Hashimi is one of several female doctors running for Congress as Democrats. the apartment with asif and baluch/YouTube

When Dr. Nadia Hashimi was a seventh-grader in Ramsey, N.J., she and a friend convinced the local board of education to ban Styrofoam from school cafeterias. It taught her an early lesson in the art of persuasion.

"The biggest thing was, they listened to us," Hashimi recalled the other day, a quarter-century after her political triumph. "If you present the science rationally, you can make a change."

Today, Hashimi is still talking about science and trying to make a change — but she’s doing it on a much larger political stage. Hashimi, a pediatrician and novelist, is seeking the Democratic nomination in Maryland’s 6th District.

Hashimi is one of at least eight female physicians running for Congress as Democrats this election cycle — and most are making climate action a key part of their platforms. That might not sound like a lot, but if any of these women win, they’ll be making history: No female Democratic physician has ever served as a voting member of Congress.

In fact, among the dozens of medical doctors who have served in Congress through the years, only two have been women. Both were Republicans who only served briefly: former Reps. Nan Hayworth, an ophthalmologist, represented a suburban New York district in 2011 and 2012, and Shelley Sekula-Gibbs, a dermatologist, represented a suburban Houston district for just seven weeks in late 2006 and early 2007. A non-voting member, Del. Donna Christensen (D-Virgin Islands), who had a family medical practice, spent nine terms in Congress.

The surge in Democratic female physicians running for Congress appears to match the boom in women’s political activity since President Trump was elected. Dr. Ramsey Ellis, a hand surgeon in Elmhurst, Ill., who is a member of a loose nationwide coalition of female doctors called Physician Women for Democratic Principles, said many had worked for 2016 Democratic presidential nominee Hillary Clinton and were devastated by her defeat.

"Like so many people in this nation, the group woke up and thought, ‘What the hell are we going to do, and how do we work to be effective now?’" Ellis said.

For the first few months after Trump’s election, the physicians group was raising money for organizations like the Sierra Club, Planned Parenthood and international hunger relief efforts. But increasingly, as more of its own began running for office, Ellis said, Physician Women for Democratic Principles has become a fundraising and strategy conduit for the candidates — most of whom had never sought public office before — while continuing to support advocacy groups and charitable causes. In all, the group has raised about $860,000 in the past year.

Now, the female candidates and the leaders of the physicians group are in regular contact, usually through group text messages.

"It’s a place I feel I can go to regularly for advice," Hashimi said. "You know that that person [in the group chat] gets you because you have the same journey and the same challenges. It’s a place where you feel comfortable asking rookie questions."

In addition to Hashimi, the roster of Democrats in what Ellis calls the "Run MD Run" group running for Congress is:

The female physicians group is also supporting Dr. Andy McGuire, a radiologist and former Iowa state Democratic chairwoman who is one of eight Democrats running for governor in the Hawkeye State. The group additionally has endorsed two candidates for state Legislature and is expected to back more as the election cycle progresses, Ellis said.

Climate ‘a fundamental issue of our health’

Because they are medical professionals, the Democratic women are understandably emphasizing health care as they campaign, an issue on which they have great expertise and many ideas. But several are talking almost as often about climate change.

"It’s a fundamental issue of our health and the health of future generations," said Horton of North Carolina.

Horton has been one of the most vocal about climate. One of her relatives was killed in the 2010 Deepwater Horizon explosion in the Gulf of Mexico, and the 7th District takes in the southern third of North Carolina’s coastline. Residents there are mobilizing against the Trump administration’s proposal to allow offshore drilling, and Horton believes this energy is powering her campaign to oust Rouzer, who is in his second term.

Rouzer has been generally supportive of offshore drilling, and "he has taken every possible chance to defund and hurt the mission of the EPA," Horton said. "I’m hoping the 2018 elections is going to be the time when people say they’ve had enough of corporate polluters and career politicians."

Of the 13 physicians currently serving in Congress, 11 are Republicans — and many of them are vocal climate skeptics. That’s reflected in part by their most recent ratings on the League of Conservation Voters’ annual congressional scorecard. Four Republican members — Michael Burgess of Texas, Scott DesJarlais of Tennessee, Andy Harris of Maryland and Phil Roe of Tennessee — scored zero in 2016. Harris and Roe are co-chairmen of the 17-member House GOP Doctors Caucus, which includes dentists, a registered nurse and a pharmacist, in addition to the physicians.

The three Republican senators who are physicians did slightly better on the LCV scorecard in 2016: John Barrasso of Wyoming got 12 percent; Bill Cassidy of Louisiana got 18 percent; and Rand Paul of Kentucky got 12 percent. By contrast, the two Democratic physicians in Congress, California Reps. Ami Bera and Raul Ruiz, scored 97 and 100 percent, respectively.

The Democratic female physicians who are running for office are at a loss to explain why so many Republican medical professionals serving in Congress are skeptical of climate science.

"How do you reconcile that?" Hashimi wondered. "Maybe I’m just hanging out with the wrong physicians — or the right physicians. That’s not the conversations I’m having [about climate]. I’m not sure why that disconnect happens."

Asked why so many more male doctors than female doctors have served in Congress through history, Ellis paused for a long time.

Ellis herself is not running for Congress this year. But she is serving as finance chairwoman for Marie Newman, a marketing consultant who is challenging Rep. Daniel Lipinski (D-Ill.) from the left in the March 20 Democratic primary, and is giving Lipinski his toughest race since he was elected to succeed his father in 2004.

"My goal," Ellis said, "is getting more women elected."

Steve Valk, a spokesman for the Citizens’ Climate Lobby, a group that has worked to elevate the debate over climate change on Capitol Hill, said it’s encouraging that women of science, like the Democratic physicians, are running for office.

"It will help at the very least to move the incumbents a little bit more toward accepting the science of climate change," he said.

‘We need different types of people’

All of the Democratic female doctors running for Congress this election cycle face hurdles in their races. Some are competing in strong Republican districts. Others are running in crowded Democratic primaries against better-known opponents. Others trail their foes on the fundraising front.

Hashimi’s race illustrates the challenges and opportunities for these female physicians.

She is one of six Democrats running for an open seat in Maryland’s 6th District, which extends from the suburbs of Washington, D.C., all the way to the rural reaches of western Maryland, a part of Appalachia. The Democratic field includes two state lawmakers and a multimillionaire businessman who is expected to self-fund a major portion of his campaign.

Women’s groups are divided in the primary race: Emily’s List, the Democratic fundraising powerhouse, has endorsed one of the legislators, state Del. Aruna Miller, though Hashimi countered this week with an endorsement from the Feminist Majority. Miller countered that news yesterday with endorsements from several former presidents of the Woman’s Democratic Club of Montgomery County, an influential group in the district.

And even though Physician Women for Democratic Principles has struck an informal alliance with 314 Action, a new advocacy group that promotes scientists running for public office, the two have diverged on the Maryland race. 314 Action has endorsed Miller, a civil engineer who is completing her second term in the Legislature and who is, like Hashimi, from an immigrant family (though she was born in the U.S., Hashimi’s parents are from Afghanistan; Miller was born in India, though she grew up in the U.S.).

But Hashimi said she is confident that her medical background will help her stand out in the Democratic field to replace Rep. John Delaney (D), who is retiring from Congress to run for president in 2020.

"I am literally bringing patients’ stories to the table," she said. "This is a time when we need different types of people in office."

The female physicians running for Congress uniformly say their desire to serve in public office is an extension of their commitment to the service that they’ve shown as medical professionals. And in some cases, they’re enjoying a new and different relationship with their patients.

"I miss so many of them," Horton said. "But now I see my patients all the time on the campaign trail. They say, ‘That’s my doctor. She’s going to protect our health care.’ It’s very gratifying."