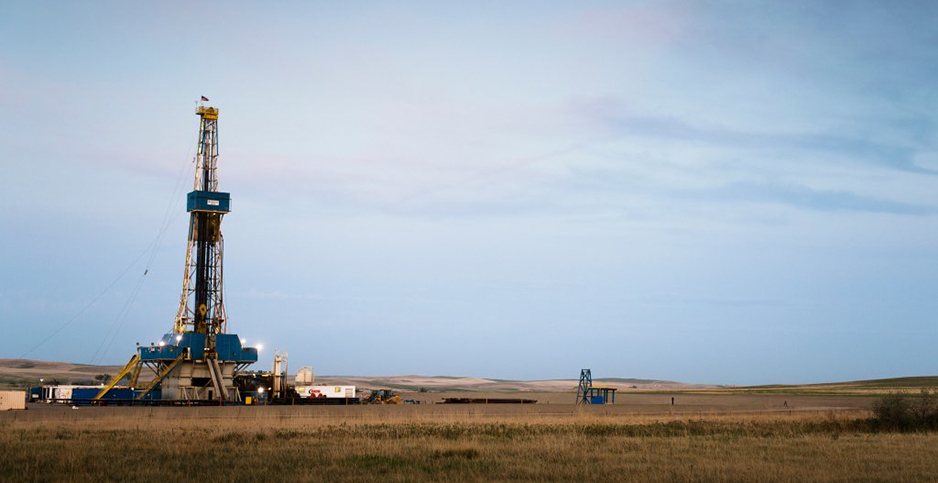 A drilling rig in the Bakken Shale, which underlies parts of Montana, North Dakota, Saskatchewan and Manitoba. Equinor

The booming shale industry could be headed off a financial cliff, experts say, and environmental groups are asking who will clean up thousands of wells drilled miles beneath the surface if businesses go bust.

The meteoric rise of U.S. shale, driven by hydraulic fracturing, continues at a fast pace. Each year, operators bring in more barrels, pushing the United States further ahead of other nations for production.

But many observers say the shale business is overheating, as frackers try to keep up the pace of production at high costs and low oil prices. They are warning that Wall Street money is drying up, and that the rate of bankruptcies could climb dramatically.

"I talk to those guys, all the fracking companies, on a daily basis. I’m very engaged in what they are doing with their business, and I completely believe that the current model is unsustainable," said Scott Forbes, vice president of the Lower 48 for Wood Mackenzie.

Some consulting firms forecast production will soon climax. Rystad Energy said in a recent report that a shale peak may be on the horizon in 2030, with most of the 14.5 million barrels per day by then coming out of West Texas’ Permian Basin.

Meanwhile, environmental groups are watching from the sidelines, arguing that plugging and abandoning the wells of a historic boom will fall to taxpayers someday, after the money has been made and the wells are exhausted.

"What I’ve been wondering is, when does this cleanup, the overhang of cleanup — when does the rubber start hitting the road?" said Clark Williams-Derry, director of energy finance for the Sightline Institute.

Industry, however, has rebutted the idea that its cleanup responsibilities are a risk — or a threat.

"Environmental groups constantly bring up things like bonding because they see it as another way to increase costs to produce as a way of reducing production," said Kathleen Sgamma, president of the Western Energy Alliance.

The American Petroleum Institute declined to comment.. On its website, it says hydraulic fracturing increased average U.S. household disposable income by more than $1,000 as of 2015 and that savings could rise to more than $3,500 by 2025.

"The U.S. has entered an era of energy abundance that will ensure we can meet our energy needs and drive economic growth well into the future," the website states.

Fracking has transformed U.S. energy production, allowing operators to achieve what politicians and energy bulls could have only imagined when the Arab oil embargo of the early 1970s shook the United States: oil independence.

In the process, operators drill down and then out for up to 2 miles — instead of drilling straight down into a puddle of hydrocarbons. They access oil and gas by performing massive fracturing operations that crack the tight rock, allowing tremendous amounts of crude and gas to flow back into the well.

Alex Beeker, principal analyst for the Lower 48 at Wood Mackenzie, outlined what many say is a looming challenge facing the industry.

A single well may be profitable, Beeker said. In the first years of production, there is a rush of oil and gas that declines rapidly. The return on investment is good, and it’s quick.

But these companies have to grow, and to grow, they need to punch more holes in the ground, and to punch holes, you have to spend more money, he said.

For every dollar they make, frackers have to make a "tough decision," he said.

"Do they return it to shareholders, or do they put it into the ground?" he said.

There are a few companies that seem to be surviving the cash crunch better, but some investors are growing doubtful, and it’s depressing share prices.

"The market is assigning very little upside to these companies beyond what they have flowing — which is very reminiscent of the dark times," Beeker said, referring to the dramatic downturn of 2014 to 2015, when the price of crude fell by half.

Worries about a "fracker’s dilemma" are not new. Journalist Bethany McLean’s book "Saudi America" questioned the financial viability of fracking in late 2018.

"The fact is that every time they put the drill bit to the ground, they erode the value of the billions of dollars of previous investments they have made," he said at a conference earlier this year.

"It’s like they can’t help themselves," Clark Williams-Derry, a financial adviser at Sightline Institute in Seattle, said of producers. "You have to run pretty darn fast just to stay in place."

Low prices have made things harder for companies, pressing them to maintain business with weaker returns.

"They are really struggling right now," said Forbes of Wood Mackenzie, who said that the crisis for frackers is bleeding into the service industry. When the amount operators can pay falls too low, it puts service companies, like pressure pumpers, in a predicament. At worst, they are choosing between making a profit and keeping their workers employed, Forbes said.

"Do we want to take the work and keep the people employed, or put the equipment in the yard?" he said a service provider asked him recently.

The debate has attracted the attention of environmentalists.

Financial assurances have never met the bar that environmentalists have asked for in states like New Mexico. But bringing shale economics into an argument over bonding is a new strategy.

The ways oil and gas companies are required to front cleanup costs differ across the country. New Mexico requires a blanket bond of $250,000 for drillers with 100 or more wells, which at best secures $2,500 per well. Wyoming, on the other hand, has a $100,000 blanket, or per footage. But the state also assesses an idle well bond to try to secure cash if a company looks like it may be in financial trouble.

No regulators are demanding the full cost of reclamation upfront, environmentalists argue.

If they did, the economics of oil and gas today would look far worse, said Kyle Tisdel of the Western Environmental Law Center.

"A lot of these companies are already in the red [considering cleanup liabilities]. They are not profitable at all," he said.

Greg Rogers, an environmental lawyer and accountant, provided evidence for the Diné CARE case in Arizona.

He noted that states would have priority on getting paid for cleanup if a company went to bankruptcy court. But that would depend on whether there was money left over, he said.

"If you wait around too long, there is just nothing there," he said of bankrupt companies.

This has happened on a large scale in recent years. In Wyoming, the coalbed methane boom was a tremendous success for industry in the state. But when the price of gas began to fall, larger operators sold off their assets at a bargain to smaller outfits that couldn’t stay in the black.

Gas prices continued a downward slump. Busted companies left thousands of wells orphaned across the state on federal, state and private land starting in about 2014.

Wyoming created a fund, paid into by a tax on operators, to pay for the reclamation. But it’s a moving target, with thousands of wells left to plug years after the bust.

Sgamma, president of the Western Energy Alliance, said the bonding debate is a ploy.

"Troubling economics has to do with cash flow for new development, and in no way releases a company from its obligations to reclaim or properly P&A [plug and abandon] wells," she said in an email.

"The industry is constantly innovating and going through creative destruction, which is why there are mergers and acquisitions in the industry that ebb and flow," she said.

Sgamma argued that liabilities for cleanup don’t dissipate. They are attached to the assets. And for federal wells, bonds are held until the company’s cleanup has been signed off on by the agency, she said.

Industry isn’t saying much about the cleanup aspect of the shale industry, said Beeker of Wood Mackenzie.

In part, that’s because the play is still immature, and there’s an ongoing debate about how long horizontal wells will last.

The earliest batch of wells drilled are just under a decade old. In some cases, those are being refracked in places like the Bakken, he said.

But the idea of a reclamation crisis is catching on in some circles.

Rep. Alan Lowenthal (D-Calif.) introduced a bill Tuesday that would raise the bonding required for oil development on federal land. In a statement, Lowenthal said bonds are currently "woefully inadequate" to meet the cost of plugging and reclaiming wells. In order to avoid a burden on taxpayers, greater upfront securities should be made, he said in a statement.

Yesterday, the Government Accountability Office also published a report recommending that bonding be increased to reflect actual costs of cleanup. The Bureau of Land Management agreed with that recommendation.

Federal bonding requirements haven’t been updated since the 1950s and ’60s, the report notes.

Rogers said bonding debates have always been about a deal between government and industry.

Government allowed companies to drill and excavate minerals without demanding the cost of cleanup because industry argued that it couldn’t afford it and still provide the jobs, royalties and taxes that governments wanted.

"Industry always wins on that [argument]," Rogers said, "until industry looks like it’s not sustainable."