Is Zinke signaling a shift from solar? It’s complicated 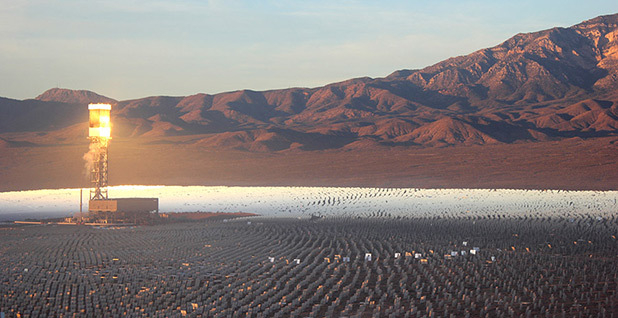 Interior Secretary Ryan Zinke delivered a string of comments this week suggesting that large-scale solar power development might not be a wise use of public land.

Speaking at a Clean Energy Week conference in Washington on Tuesday, Zinke said the United States will be hooked on fossil fuels for the next two decades without better battery technology to store electricity generated by sun, wind and other renewable energy sources, so extraction of fossil fuels on public lands is going to be in the nation’s best interest.

The secretary, already facing blowback for earlier comments about Interior Department staff loyalty, then said land used to host solar panels has no other use outside of energy production, adding that rooftops — not public land — are the best platforms for producing solar power going forward.

"If I see solar cells out on land, that land is no longer useful for anything else but energy, but there’s a lot of roofs when you fly over," Zinke said at the conference. "And I think the greatest opportunity, quite frankly, for the solar industry is look at all the roofs in America."

Conservation groups and public lands advocates jumped on Zinke’s comments as further evidence the Trump administration does not view renewable energy development as a priority.

The Obama administration approved 60 commercial-scale wind, solar and geothermal energy projects on federal lands that will have a total capacity to produce about 15,500 megawatts of electricity — enough to power more than 5 million homes and businesses. Of those approved projects, 36 were solar power projects.

The Trump administration, to date, has approved one renewable energy project — First Solar Inc.’s 210-MW White Wing Solar Project in Arizona. That project is on private land, and the Bureau of Land Management approved a right-of-way grant to allow a 3.5-mile-long transmission line from the photovoltaic power plant to cross federal land.

But BLM has targeted the "potential approval" of six commercial-scale solar power projects covering thousands of acres of federal land in California and Nevada as early as next year, and no later than 2019, according to data provided by BLM spokeswoman Megan Crandall.

Those six solar projects, if built, would have a total capacity to produce 1,900 MW of electricity — enough to power about 570,000 homes, the data show.

"The secretary was not suggesting anything," Interior spokeswoman Heather Swift said in an email to E&E News on Zinke’s solar power comments. "He said very clearly that he thinks there’s a great opportunity for rooftop solar. In fact, some DOI facilities, such as our parking facility in Sacramento, Calif., already utilize rooftop solar."

She added, "The Secretary supports all of the above energy and the [Interior] Department is in the process of processing solar projects as well as traditional energy projects."

But Zinke’s comments, particularly that solar power might not be a good use of public land, concern environmentalists at a time when the Trump administration has made it clear that it wants to increase fossil fuels development on federal sites.

Ileene Anderson, a senior scientist and biologist for the Center for Biological Diversity in Los Angeles, called Zinke’s disparaging remarks about large-scale solar projects a "ruse" designed to justify diverting BLM resources away from renewables to increased oil and gas development and mining activity.

"It’s certainly part of a ruse where their real agenda is to drill and mine as much federal land as possible," Anderson said.

But Anderson and others say they are intrigued by Zinke’s positive comments about the potential of rooftop solar.

CBD and other groups sparred with the Obama administration over its push to build large-scale solar projects on federal lands — sometimes, they said, to the detriment of desert ecosystems and wildlife.

"Of course we would like to see the rooftops and built environment utilized before desert habitats are needlessly destroyed," said Kevin Emmerich, co-founder of Basin and Range Watch, which has been a vocal critic of industrial-scale renewable energy projects on undeveloped tracts of federal land.

But rooftop solar is simply not at the stage yet where it could replace large-scale solar projects, said Kim Delfino, California program director for Defenders of Wildlife.

"There will need to be some large-scale renewable energy projects brought online" if solar, wind and geothermal power are to play a greater role in the nation’s energy portfolio, Delfino said.

In particular, Delfino and others say they want BLM to move forward with proposed projects within the boundaries of the federal-state Desert Renewable Energy Conservation Plan (DRECP) area in the southern California desert.

The DRECP established 388,000 acres of "development focus areas" deemed suitable for commercial-scale renewables projects, as well as areas to be protected or managed for their recreational values over nearly 17,000 square miles.

BLM is moving forward with processing proposed projects within the DRECP boundaries. Indeed, all three solar power projects BLM is set to approve in California by 2019 are within development focus areas in the planning region.

"If Zinke tells them not to, that would be unfortunate," Delfino said. "They are focused now on churning out oil and gas and coal, and if that means throwing renewables under the bus, they will."

Zinke has already attracted a lot of attention during National Clean Energy Week — but not for comments on energy.

He questioned a third of his staff’s loyalty to the American flag at an oil and gas industry event Monday and said yesterday he’s "marching toward" a massive agency overhaul.

He also said without explanation this week that "fracking is proof that God’s got a good sense of humor and he loves us," according to an article from the Associated Press (Greenwire, Sept. 26).

Both renewable- and fossil-energy advocates appeared perplexed by Zinke’s comments on solar, and unwilling to comment, suggesting Interior provide more clarification on the secretary’s remarks.

The solar industry’s largest trade group issued a formal statement on the ability of solar power to be deployed on more than just rooftops.

"From rooftop panels to large scale installations owned by utilities, there is room for all solar energy and each one plays an important role in the diversification of our nation’s electricity mix," said Abigail Ross Hopper, president and CEO of the Solar Energy Industries Association.

Zinke and Energy Secretary Rick Perry this week have reiterated the administration’s support for renewable energy despite criticism from environmentalists.

Perry in particular has touted the production of wind power and construction of transmission lines in Texas during his term as governor.

"The fact is, nobody can get up in my face about renewables," Perry said yesterday. "I was governor of a state that created 18,000 MW, we created more wind energy than five countries."