Is Zinke’s nomination in peril? 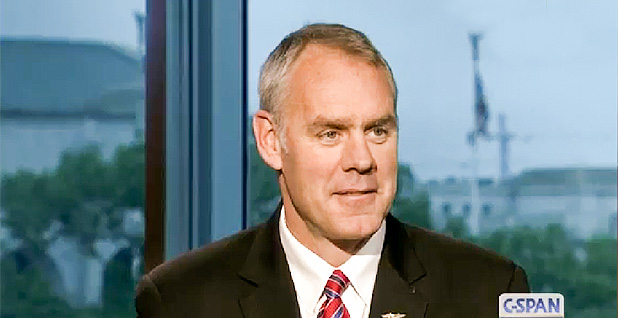 Rep. Ryan Zinke (R-Mont.) is accused of committing travel fraud during his time as a Navy SEAL. Photo courtesy of C-SPAN.

Will Ryan Zinke become the first nomination casualty of the incoming Trump administration?

In the wake of reports that Zinke — a Montana Republican congressman and President-elect Donald Trump’s pick to lead the Interior Department — committed travel fraud while serving as a Navy SEAL, energy and environmental insiders are speculating that Zinke’s nomination could be short-lived.

Typically, "if something like this comes tumbling out," nominees will withdraw their names, said Don Barry, a former longtime Interior official who served as assistant secretary for fish and wildlife and parks during the Clinton administration. "You don’t want to put your president-elect through this."

The Trump transition team and Zinke’s office aren’t commenting publicly on the reports, which allege that Zinke defrauded the government to pay for personal trips during his career as a Navy SEAL (Greenwire, Dec. 21).

But it’s an issue that’s certain to be hounded by Trump’s critics on Capitol Hill and the environmental community, and could pose problems for Zinke during Senate confirmation hearings. Senate Republicans need only a simple majority to confirm the nominee, but allegations of fraud could potentially cause some GOP lawmakers to peel off.

"Senators will need to get access to all the findings and documents from the Navy’s investigation and get to the bottom of what actually happened," said Matt Lee-Ashley, a former Obama Interior official who’s now at the Center for American Progress.

"Were there violations that would disqualify a person from any other job in the federal government? President-elect Trump’s Cabinet nominees should have to meet the same standards, play by the same rules and follow the same laws as every other citizen who is seeking a job in public service," Lee-Ashley said.

Democratic senators are already scrutinizing Trump’s nominees, and the confirmation process early next year is certain to be highly politicized.

Some Republicans and allies of Zinke don’t see the issue hamstringing his eventual confirmation.

"I have a very hard time believing that anonymous allegations and an attack by the Montana Democratic Party’s spokesman are going to gain any traction in light of Zinke’s glowing evaluations in his Navy fitness records, which take into account the results of the travel audit done at the time," said McKie Campbell, a former Republican staff director on the Senate Environment and Natural Resources Committee.

Scott McEwen, who co-authored the book "American Commander" with Zinke, said today in an interview that Zinke’s character is "impeccable" and that he is "beyond reproach, in my opinion, as far as his service to the country."

McEwen called the controversy "a complete travesty" and accused the left of playing politics. "It’s the same old stuff they always do."

Zinke’s allies say the allegations, dating back to the 1990s, were already aired during the freshman congressman’s run for the House in 2014.

Zinke was a Navy SEAL, including stints on the elite SEAL Team 6. He admitted during his 2014 run for Congress that he had reimbursed the Navy $211 for a plane trip from Virginia to Montana in the 1990s. He said he had been searching for SEAL training sites on a trip that wasn’t approved.

"Was I perfect? No. Was it embarrassing to me to have nine years of travel claims formally reviewed and audited? Yes. You know what, if I were to do it again, I would have done things differently. I learned a valuable lesson. My lesson learned is you’re accountable," Zinke said, according to the Missoula, Mont., Missoulian.

The publication The Intercept reported this week that Zinke was caught submitting travel vouchers to the Navy for trips back to Montana to renovate his home, citing anonymous former unit leaders and a military consultant.

Zinke’s performance evaluations also include praise from his supervisors and promotion recommendations, the Missoulian reported.

Zinke’s allies say the flap over his allegedly fraudulent travel has been sparked by political opponents with an ax to grind.

But the controversy is likely to receive more scrutiny during confirmation hearings.

"What this really shows, I think, is sloppy vetting," said former Interior official Barry. "This should be on the table and resolved one way or the other before somebody’s nominated."

He added that "for an incoming administration that campaigned against waste, fraud and abuse — the classic punch words — this is deeply concerning."

Another former senior Interior Department official said today that "one of the most sensitive ethical issues for Interior Department employees has been travel fraud. … The fact that Zinke may have violated similar requirements while in the military will raise major alarm bells among federal ethics officials."

And Barry said it’s "bad news for any secretary of any department to have a cloud like this hanging over their head."

Zinke’s nomination has been met with praise by some conservationists, who have welcomed his opposition to the sale of federal lands and his support for the Land and Water Conservation Fund.

"The irony for the conservation community is, he’s probably about as good as you’re going to get," Barry said.