Island settled by slaves erodes under waves and wealth 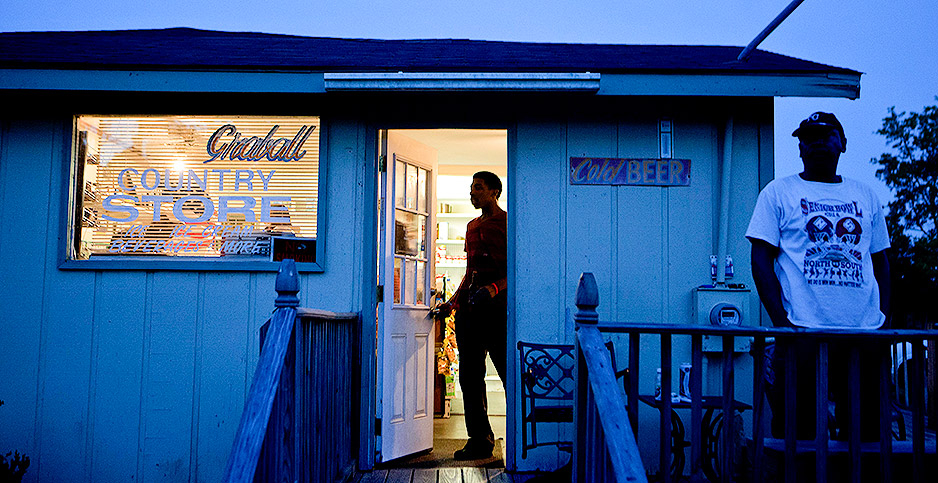 At the fishing creek. Outside the country store. And at the only bar on this sea-battered island settled by freed slaves 150 years ago.

The mobile home came by barge, and its arrival on Sapelo, which is threatened by climate change and demographic decline, was like a statement of perseverance. Things are at risk of disappearing here: shoreline, culture, people. And the double-wide challenged that notion by saying Franny Bailey is here to stay.

Charging down the main road in a rickety golf cart last summer, I rode past green cedars, cypress, sugarberry and holly oaks. Rows of tall pines made a dense habitat for hogs, wild cows, alligators and snakes. The beaches have been trampled by storms but not by many people. Though that seems to be changing. Island residents are facing pressures from new homeowners who are attracted to the island’s scenery and simplicity.

And the sea is offering its own warnings. Ocean waters have risen nearly a foot since the 1930s, when the island’s white owner forced black residents to live in Hog Hammock, a modest town of trailers and compact homes. Through the ages, this small group of "descendants," as they are known, have coexisted with the sea.

"It’s a location that puts us on the edge of the Atlantic Ocean, the ocean that brought my people from Africa to clear the land, build dikes and dig drainage canals so that the island could be flooded and drained as needed to grow rice and cotton and other crops," the late historian Cornelia Walker Bailey wrote in 2000.

Those ditches have slowly filled up with brackish water as sea levels rise.

Now these African descendants making up the Gullah people, who are also known as the Saltwater Geechee, face two types of erosion — one of culture and the other of land. One stems from the use of carbon-rich energy and its emissions. The other feels more immediate, residents say. It’s driven by affluent white people who purchase oceanfront properties at bargain prices.

Both tides — ocean and tourist — threaten to wipe away the Saltwater Geechee. Their end could be as bitter as their beginning.

Franny’s double-wide trailer had to pull into dock at the tidal goldilocks — not too low, not too high. On the barge, the trailer looked like an oversized toy. But after traveling over narrow island roads and around sharp turns, to Fanny’s dirt lot, it seemed smaller. It fit with most of the homes in Hog Hammock.

Most, but not all.

In the last decade, new homes have cropped up, owned by newcomers who were drawn to the island by its unblemished beauty. The houses are built on 8-foot wooden pilings, in accordance with Federal Emergency Management Agency building codes to protect them from floods and rising sea levels.

Dozens of scientists also visit the island. They note that sea levels have risen 11 inches in the past 80 years. That’s bound to accelerate. Climate models project that the ocean water around Sapelo is expected to rise 3 to 6 feet by the end of the century.

"That means storm tides that would have reached a certain distance in the mainland now have a foot higher to start from and are able to go up higher into the uplands," said Clark Alexander, a marine sciences professor at the University of Georgia.

Forty-two years ago, the National Science Foundation recognized the island’s value and sent researchers to study it. Christopher Craft, a wetlands scientist at the University of Indiana, was one of them. Craft has spent 35 years studying the Georgia coast.

"The sea is gradually encroaching on the land," he said in a drawl. But storm surges could happen much sooner, he said, referring to heaving water pushed onshore by whipping winds.

Last September, Sapelo Island barely escaped the wrath of Hurricane Florence, which made landfall 120 miles to the north and left 36 people dead. But the two years prior, Sapelo got a taste of hurricane power for the first time in decades, when Hurricanes Matthew and Irma skirted the island.

Still, the storms took a toll.

During Matthew, high winds floored hundreds of trees, leaving lanky trucks toppled over one another like Tinkertoys. Residents lost power for six days.

Irma was worse. Many homes filled with 3 feet of water. Cars were totaled. The wooden floors in St. Luke’s Church had to be replaced. Sand dunes on the beach were swept away. At the island’s University of Georgia campus, flooding ruined three-quarters of the buildings. Renovations cost almost $3 million.

For some, it was a wake-up call. For others, it was nothing.

Sitting on the back porch of an old wooden house, Stanley Walker chatted with his buddies after a day of working as a handyman in 90-degree heat. He wasn’t excited about being interviewed. "It’s drinking time," explained Walker. But his friends said I could stay.

Asked about the hurricanes, Walker, who’s in his 50s, downplayed the havoc as causing "cosmetic damage."

Matthew and Irma were the first two hurricanes he had experienced since he was a boy, but he didn’t seem alarmed. Very few of the descendants have flood insurance. Walker dismissed the idea: Why spend years paying premiums when you may never file a claim?

"There might not be another flood for 100 years, and all of us will be done and gone," he said. He thought the new houses built on stilts were equally absurd. "Why would I go up? I might as well go to New York City and live on the fifth floor."

Hog Hammock sits 4 feet above sea level, making it particularly vulnerable to rising seas and higher tides. County regulators require new homes to be built 4 feet aboveground. It used to be 8 feet until the rule was loosened.

Talking about the vacation homes evokes feelings of loss for some descendants. They refer to vacationers as "outsiders" because they show up for a week or two in the spring and park their Jeeps stuffed with kayaks under their houses.

"We don’t want to see that because we want to preserve it, so our grandkids can come," said Yvonne Grovner, who moved to the island 38 years ago after she married her high school boyfriend, Argene Grovner, a descendant.

Sitting at the kitchen table on a warm summer night, Yvonne Grovner took a break from picking the meat out of crab shells. She delivers meals to tourists staying at a few upscale places. Other options are scarce. There’s just one small store on the island, and it closes at 1:30 p.m. after the lunch rush.

Grovner works as a tour guide at the Department of Natural Resources. She considers herself lucky.

Many descendants are not as fortunate, prompting them to sell their land that has been passed down for generations. It marks the slow erosion of the Saltwater Geechee’s culture.

When Maurice Bailey was growing up on Sapelo, none of the houses was on stilts. It wasn’t a requirement by the government, and maybe for good reason. The water level in the ditch in front of the store was much lower.

"It was a wonderful thing because there were a lot more people on the island," said Bailey, who’s in his early 50s. "We rarely got off the island. We didn’t know anything else."

Tall with a broad smile, Bailey laughs with strangers as if they’re in on a joke with him. After his mother, Cornelia Walker Bailey, a respected elder, died in 2017, Maurice accepted the informal role of community leader. His mother’s work to preserve the Saltwater Geechee culture was immortalized in an obituary published by The New York Times.

In her place, Maurice Bailey has convened weekly dinners on Wednesday nights.

Preparing for a recent feast, Bailey laid pork rib-eye on an open grill. I offered to help, and he gladly instructed me to peel the shrimp.

Bailey’s kitchen is bright yellow with black-and-white checkerboard wallpaper. A painting reads, "Never Trust a Skinny Cook." An assortment of canned foods people left behind packed the cupboards in the dark-green mobile home. It is the kind of place that has frequent guests.

Last year, it was flooded with 3 feet of water. Bailey was not thrilled to talk about it.

The meal was at the nearby bar. A fridge of beer sat in the corner, and patrons helped themselves. They laid a few dollar bills next to bartender Frank Bailey, who was also the bus driver. Every morning at 6:35 a.m., he picks up 20 kids and brings them to Marsh Landing, where they get on a ferry boat to travel 6 miles to the Georgia mainland for school.

Maurice Bailey’s friend had just shown up with a fresh-caught fish, so Maurice tossed it onto the grill. "This is how the community works," Bailey said.

But those fishing spots along the nearby creek could be in jeopardy, scientists say.

Salt water is creeping into tidal freshwater marshes and forests. Cypress trees began dying along the riverbank in the past 10 to 15 years, said Craft, the wetlands scientist.

"I don’t know which is going to come first — the wealthy white people taking over or the marsh taking over," Craft said.

‘We see it with our eyes’

Not everyone was eager to talk about it.

Hardy, a researcher with the University of Maryland, has been traveling to Sapelo for years to study how the Saltwater Geechee are adapting to climate change.

Hardy has heard the same refrain I did: When it comes to Mother Nature, what is there to be afraid of?

There are more urgent worries. Five years ago, property taxes quadrupled. Jobs are scarce. And divisions within the community have roared to life about whether to keep or sell the land that has been passed down to them for generations.

In fact, some residents pushed back against the "science" when it was presented to them. A sociology paper that Hardy published in 2017 reported that one resident told him: "We don’t need no one to tell us, because we know. We don’t have science, but we know because we’ve been here. We see it with our eyes."

Some descendants feel as if outsiders will never understand life on Sapelo. Middle-aged residents grew up without big TVs, expensive cars, even electricity. Maurice Bailey said outsiders thought the residents were missing out on modern life. "There was an idea that we needed to be saved by the white world," he said.

People of color are more vulnerable to sea-level rise because their communities have historically existed along the coast, Hardy wrote. That’s beginning to change as affluent outsiders have bought property on the island.

By 2100, as many as 13 million residents in the United States could be affefcted by rising sea waters and changing weather, according to a paper published in Nature in 2016.

As for Hog Hammock, there has been talk of relocating the entire town to the other side of the island, which sits on higher ground.

That creates its own challenges. For some, relocation evokes past wrongs. Several residents dismissed the idea. In 1934, island owner Richard Reynolds essentially forced the five black communities on the island into one area, Hog Hammock. Reynolds then sold a majority of the land to the state.

Reynolds’ legacy remains. His mansion exists exactly as it did a century ago, right down to the teal blue paint on the bottom of the fountain.

"It doesn’t do much for me," descendant JR Grovner said one morning. "He was a thief the way I see it."