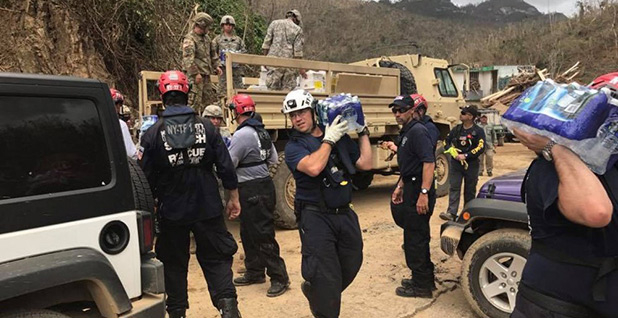 SAN JUAN, Puerto Rico — Puerto Rico continued to claw back bits of its power grid yesterday, as officials taking stock of the damage from Hurricane Maria offered their latest updates on the state of energy and transportation infrastructure.

The island’s government reported that 8.6 percent of the island had regained power as of yesterday morning, up from the Federal Emergency Management Agency’s estimate that 7 percent was back up Tuesday.

Crews from the Puerto Rico Electric Power Authority, or PREPA, reported that crews were fixing lines around San Juan. The American Public Power Association, the major association for public utilities that is coordinating aid, said Tuesday that PREPA expected to have 15 percent of customers restored in the next two weeks.

Recovery of the grid is lagging far behind other key parts of the island’s infrastructure. The government reported that 76 percent of gas stations, 69 percent of supermarkets and 43 percent of telecommunication had been restored as of midday yesterday.

Commonwealth Oil Refining Co. Inc., an oil refinery on the island, was re-energized, which will help ease the fuel crunch, according to a tweet by Michael Pierluisi, secretary of the island’s Department of Consumer Affairs. And the airport is open for 24-hour service for the first time since the storm hit, according to local newspaper El Nuevo Día.

"Having the primordial elements of energy, documentation systems, inspection systems, systems of boarding and passages that connect the airplanes with the building, the airport is automatically returning to normal activity," Agustín Arellano, executive officer of Aerostar Puerto Rico, which runs the airport, said in the story.

Officials attempting to rebuild a wrecked grid are tethered to help from U.S. electric utilities from the mainland. A Montana-based energy contractor, Whitefish Energy, has been hired by PREPA to lead the rebuilding of the transmission system and distribution circuits, APPA said in a statement. One focus is reconnecting the island’s hydroelectric dams. The company, based in Whitefish, Mont., sent 200 linemen to the island several days ago, and some of the near-term focus is on reconnecting the island’s hydroelectric dams to the grid.

The company has said its part in grid rebuilding could require 300 workers and that the entire project could take years.

"Usually when we come into a situation like the hurricanes that hit the United States, we go down there and there [are] still some resemblance of the grid, you know, you’re repairing maybe 35 percent of the grid in those cases," the company’s CEO, Andy Techmanski, told a local newspaper.

It’s rare to walk into a job where nearly 100 percent of the electric grid is being rebuilt, Techmanski said, according to the newspaper.