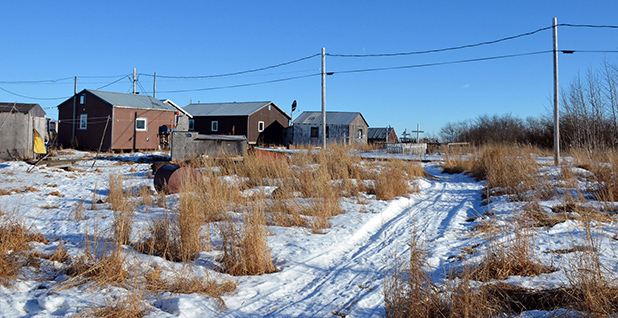 The small Native village of Oscarville, 400 miles west of Anchorage, is the focus of a pilot program to address its high energy costs and lack of sewer and water. Photo by Margaret Kriz Hobson.

BETHEL, Alaska — The Kuskokwim River was frozen solid on Monday as a caravan of white trucks crunched down the shoreline of this southwestern community onto the ice-covered river for a 6-mile drive past ice fishing camps and snow machines to the small Native village of Oscarville.

At the edge of town, Alaska Sen. Lisa Murkowski (R), five other U.S. senators, Energy Secretary Ernest Moniz and Alaska Gov. Bill Walker (I) climbed out of the trucks and made their way across a wooden boardwalk to a community meeting at the village school.

Murkowski, chairwoman of the Senate Energy and Natural Resources Committee, had invited the high-power group to Alaska’s Yukon-Kuskokwim region for a firsthand look at the critical energy and infrastructure problems facing the state’s rural villages, as well as the potential solutions on the horizon.

Oscarville, home to 60 people, is living with some of rural Alaska’s most severe problems. Only the school building has sewer and water service. The community’s 15 homes must haul water from the river or collect snow and rainwater for daily use. Absent modern sewer systems, the residents use honey buckets that they empty into ditches outside town.

Homes in the village rely on heating oil that residents must haul from Bethel by river because no road connects the two communities. None of the village’s 18 buildings is adequately insulated. A utility in Bethel provides electricity through a feeder line, charging residents based on an ancient metering system that is in dire need of an upgrade.

Like other rural Native villages in Alaska, Oscarville’s everyday problems are exacerbated by the region’s high cost of energy, noted Jackie Qatalina Schaeffer, a project specialist with WHPacific Inc., a Native-owned engineering firm.

However, residents of Oscarville hope conditions will soon improve thanks to a pilot project aimed at helping village leaders work with government regulators and community development experts to craft a comprehensive plan for solving the community’s problems.

"Project development in communities is usually very siloed," explained Schaeffer, who is overseeing the project. "The funding comes from the state or federal government, and the projects are implemented from the outside in. We’re taking a holistic approach. How can we address this from the community level and engage the people and possibly create economic drivers in the process?"

The goal is to draft a community development blueprint that other villages and regional organizations could use to improve conditions throughout rural Alaska.

A key part of the problem for Alaska’s remote villages is gaining funding at a time when the state is facing a financial crisis. Due to low oil prices, the state is coping with a $4 billion budget deficit that’s forcing government officials to cut energy assistance and development programs.

At the same time, private sources of money are also difficult to find in Alaska. As a result, Oscarville’s pilot program is seeking additional funding to stay afloat.

State Rep. Bob Herron (D), who represents the Bethel region, said the Oscarville development project could lay the groundwork for improving conditions in rural communities throughout the state.

"This pilot project is like a test tube baby," he said. "If we can do it on a small scale, we will succeed elsewhere. A holistic approach to technical assistance and community development is important."

Alaska’s exorbitant cost of energy is a critical problem for rural communities, with some remote Native villages paying as much as 50 cents per kilowatt-hour for electricity and $10 per gallon for gasoline and home heating oil. Even in Bethel, the largest town in southwestern Alaska, gasoline stations this winter are charging $5.62 per gallon.

At a Senate Energy Committee hearing in Bethel, Energy Secretary Moniz released a study showing that even solar energy could be cost-effective in Alaska because it would be cheaper than local diesel-powered electric generation.

"Part of the secret is that if you look in terms of the competitiveness of any technology, including solar, its attractiveness should be gauged by what you’re replacing," Moniz explained in an interview.

"The reality is that solar could be very cheap, especially in an isolated context where anything else you do is going to be tremendously expensive."

The Oscarville pilot project is one of a growing group of infrastructure development and renewable energy initiatives popping up in Alaska’s rural villages.

Two-hundred miles southeast of Bethel, the Native village of Igiugig is the site of an energy experiment aimed at pulling electricity from the local Kvichak River.

Last summer, Ocean Renewable Power Co., based in Portland, Maine, installed a 25-kilowatt RivGen Power System in the local waterway and was able to temporarily generate some electricity for the local community.

At the time, Igiugig, population 70, faced "a desperate situation," explained Ralph Andersen, president and CEO of the Bristol Bay Native Association. "Heating fuel cost about $7 a gallon. Power in the community cost $1 per kilowatt-hour."

This summer, the company plans to return to the village to continue testing its power generation unit, which Andersen said looks like an underwater wheat thresher.

So far, 64 Alaska villages have pledged to reduce their per-capita energy use by 20 percent by 2020. Under that program, Energy Department experts will work with those communities to help draft energy efficiency programs. Five communities will be selected for up to $3.3 million in federal funding to implement their plans.

Murkowski also included provisions to help Alaska cope with the high cost of energy in her bipartisan energy package, which is pending in the Senate.

Those amendments would reauthorize state home weatherization and energy efficiency programs, as well as boost hydropower, geothermal, biomass and marine hydrokinetic efforts in Alaska and other states.

"If we can harness more of our local resources, and if the federal government can step up as a partner with our state, we can empower Alaskans," she said at the Bethel field hearing. "We can unleash our ability to innovate, and we can make energy far more affordable and reliable for Bethel, Oscarville and communities all across our state."

But local leaders say much more is needed to help rural communities cope with the high cost of heat and electricity.

"Many, if not all, of our communities are still powered by diesel generators," noted Andersen of the Bristol Bay Native Association. "Nearly all of our homes use home heating fuel because we can’t afford the cost of electric heat and natural gas is nonexistent.

"Transitions to other energy sources are slowly taking place, but they are expensive," he added. "We need continued funding for our supplies of diesel and home heating fuel during the transition period until other sources are in place."