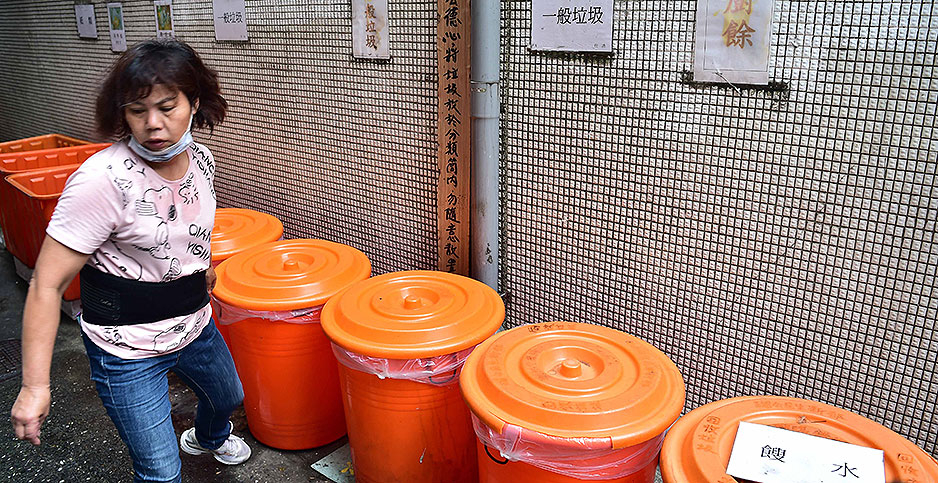 Excluded diplomatically from the rest of world by Beijing’s stance that there is only one China — the People’s Republic of China — the Republic of China, or Taiwan, is finding other ways to forge relations with its closest neighbors. And government officials in this thriving democracy may have found a niche in environmental diplomacy.

Taiwan is starting by assisting with Asia’s mounting solid waste and ocean plastic trash problems, something the government here had recent experience with.

"We have wide-ranging international cooperation, especially with Southeast Asian countries," said Shen Chih-hsiu, deputy minister of Taiwan’s Environmental Protection Administration. "One big area is recycling. We’ve had more than 20 years’ experience in recycling, so that’s one area that we’re assisting other countries with."

Indeed, Taiwan has transformed itself into one of the top five global recyclers in less than a decade, according to Nate Maynard, a research associate at the Chung-Hua Institution for Economic Research. Many of this island’s techniques can be exported to Southeast Asia, as well, he said.

Taiwan is home to 23 million people on an island only slightly larger than New Jersey. It once landfilled all its solid waste until space ran out. The country then turned to incinerators, but that only worsened its acute air pollution problem.

Maynard said a combination of pressure from popular protests and the government’s desire to find alternative streams of economic activity eventually led to a renaissance in recycling. In 2001, he estimated, Taiwan recycled less than 10% of its solid waste, but today, "Taiwan actually has a higher recycling rate than Japan."

The country is now going further. Plastic bags are either banned in the capital or must be purchased at retail locations. Taipei’s fast food restaurants began rejecting plastic straws at the end of April, and Taiwan’s environmental officials would like to see that initiative expanded.

Still, Maynard thinks the government has a long way to go toward improving its international environmental messaging. Taiwan’s recycling success story "is not something people talk about, because Taiwan has an interesting diplomatic situation," he said.

"The EPA has an ocean waste strategy plan, they said, and they say they want to use it as diplomacy," Maynard added. "But in my research, in experience, I have not seen a lot of English-language resources, especially from the government, explaining what the government’s solid waste management policies are in a positive and attractive way."

Shen said Taiwan is finding success through back channels.

"One recent example is Malaysia," he said through an interpreter during an interview at his office. "Because of the new government that’s been elected, through the Ministry of Foreign Affairs, they’ve come to us for help in gaining our experience in recycling. And of course there are other countries and other areas where we help."

Recycling is the most active area of cooperation, but Taiwan is now busy expanding its assistance to Southeast Asia in mercury monitoring, groundwater pollution remediation, and air pollution tracking and mitigation. Environmental data is regularly shared between Taiwan and its Southeast Asian neighbors, and the country has been hosting technicians from across the region for training in mercury monitoring and control.

The country is making inroads into assisting with Southeast Asia’s worsening ocean plastic trash problem, thanks in part to E.U. recognition, said Shen. "It was Europe that took notice of Taiwan because Taiwan has an outstanding record of ocean marine cleanup and especially in our reuse of waste, so this will allow Taiwan to participate more on the international stage," he said.

Several nations and the European Union maintain commercial and cultural affairs offices in Taipei, but the vast majority of U.N. member states shun Taiwan in favor of Beijing.

China has successfully lured small developing states to maintain formal diplomatic ties with the mainland instead of Taiwan, and Beijing has grown increasingly aggressive in locking the island out of multilateral forums, including global climate change talks and the World Health Assembly.

There are few exceptions: Belize has an embassy here, and Palau hosts a Taiwanese embassy in its capital.

But Shen said Taipei is now busy expanding environmental relationships with the Philippines, Malaysia, Thailand and Vietnam as economic development in Southeast Asia is leading to the same pollution and environmental problems Taiwan struggled with years ago.

"We hope that others in the global village can see that through our assistance, especially many developing countries, that we are sincere in taking part in world affairs," said Shen.

Shen said that so far, his government hasn’t run into any opposition from Beijing in terms of international environmental cooperation. The eco-assistance can occur without governments formally recognizing Taipei, and without Taiwan’s ascendance to any international body, such as the U.N. Framework Convention on Climate Change.

And a cleaner East Asia will reap benefits for the region more broadly, including mainland China.

"We attempt to attend all the international climate change conferences because we are a responsible citizen of the globe; however, China has been pressuring us on the international stage," said Shen. "But through our cooperation with Southeast Asian countries and accomplishments, those speak for themselves, and others are witnessing these accomplishments."

Maynard cautions the government to be careful when exporting its success to other nations with different socioeconomic conditions. For instance, he noted, the Philippines is sensitive to corruption problems, and officials in Manila want to make sure solid waste management programs don’t overburden poor households.

Still, he sees great potential given the immense success Taiwan has had in revolutionizing solid waste in such a short period of time.

"There are elements of the system you can export: The infrastructure, the foundation is possible," said Maynard. "Taiwan can help."

Visitors to Taipei riding the airport train to the city’s main station can see that same line emblazoned on advertisements meant to appeal to rising numbers of visitors from Malaysia, Vietnam, Singapore, Indonesia and the Philippines.