Issues to watch as Hill heads into election season 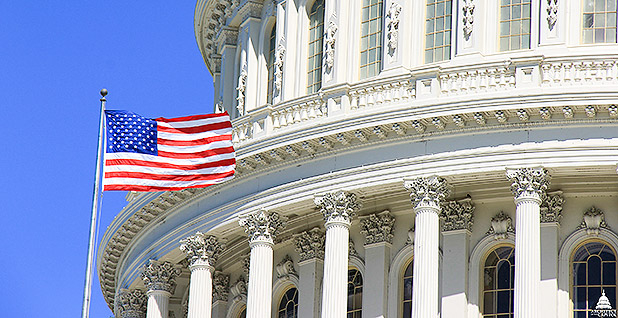 Lawmakers have a full plate for the coming months, including appropriations, the farm bill and reauthorizing the Land and Water Conservation Fund. Architect of the Capitol/Wikipedia

Congress returns this week with low expectations for moving major legislation that will make it to President Trump’s desk before this fall’s midterm elections.

But lawmakers are still expected to weigh in on multiple fronts, including fiscal 2019 spending and nominations, that will have significant impacts for the energy and environmental communities over the next six months.

Here is what to watch for as Capitol Hill kicks back into high gear after its two-week spring recess:

Capitol Hill won’t be able to avoid another spending showdown. Having finally finished fiscal 2018 appropriations with enactment of the $1.3 trillion omnibus before recess, Congress this week will dive into fiscal 2019 matters.

Lawmakers will need to have some spending legislation in place by Oct. 1, when the new fiscal year begins, or risk a government shutdown.

It’s widely expected that the chambers will wind up passing a stopgap measure to fund agencies at fiscal 2018 levels until after the elections and then move an omnibus during the lame duck or next year.

"We’ve just got to go into it right away because we’re already five, six months behind," Sen. Lisa Murkowski (R-Alaska), who chairs the Appropriations panel that funds U.S. EPA and the Interior Department, said before the break.

One twist: Conservative House Republicans and the White House have lingering angst over the two-year budget deal that lifted fiscal caps, with some Republicans already angling for votes to rescind some of the recently approved spending.

While it’s not yet known where the proposed cuts would be made, the rescission package would face very long odds in making it to the president’s desk with the recent omnibus having just won bipartisan support.

The most likely result on rescissions is a show vote for conservatives to flex their fiscal frugality before they face voters.

Sen. Richard Shelby (R-Ala.) will be formally named the new chairman of the Senate Appropriations Committee this week with the recent retirement of Sen. Thad Cochran (R-Miss.), who had held the gavel.

While Shelby’s selection is certain, there will be harder-to-predict changes in the leaders of the 12 Appropriations subcommittees, known as cardinals. And as those dominos fall, there also will be some changes in which Republican appropriators sit on what subcommittees.

Murkowski and Sen. Lamar Alexander (R-Tenn.), who heads the Energy-Water subcommittee, have both said they expect to retain their current gavels.

The fiercest Senate fights in the coming months may be over filling Cabinet positions and other executive branch openings.

CIA Director Mike Pompeo, a former House member picked to replace Rex Tillerson as secretary of State, will likely face Democratic criticism for backing a U.S. pullout from the Paris climate accord.

The Senate Foreign Relations Committee has a confirmation hearing on Pompeo set for this week.

Expect Democrats to note that he was one of the top House recipients of cash from the pro-fossil-fuel Koch brothers.

A wild card in the nomination slinging could be the future of EPA Administrator Scott Pruitt, who is embroiled in multiple ethics scandals.

If he were to leave, Democrats would likely push back hard against any nominee with similar goals to Pruitt, who has dismantled many Obama-era environmental policies.

The uncertainty over Pruitt may be on display this week, as the Senate tries to confirm his long-stalled No. 2 man at EPA, former lobbyist and Senate staffer Andrew Wheeler (see related story).

Contentious fights are also likely over CIA Deputy Director Gina Haspel, whom Trump nominated to be the first woman to lead the CIA, and the choice of White House physician Rear Adm. Ronny Jackson to head the Department of Veterans Affairs.

Protracted confirmation fights over top appointees will only further hamper efforts to confirm pending nominees at Interior, the Department of Energy and other federal agencies (E&E Daily, March 21).

The House hopes to make it two in a row in meeting its biennial goal of passing a reauthorization of federal water projects.

House leaders would like to pass a bill by the summer that would authorize Army Corps of Engineers projects and initiatives.

Congress is supposed to pass the bill every two years and for the first time in more than a decade met that goal by clearing Water Resources Development Act legislation in 2014 and 2016.

House Transportation and Infrastructure Chairman Bill Shuster (R-Pa.) will press hard for action, as he is set to retire this year. Also, rank-and-file members from both parties are likely to back a bill that greenlights politically popular projects in their districts right before they face voters.

If Shuster is to succeed, he’ll likely have to abandon a controversial proposal to use WRDA to move the Army Corps from the Defense Department to the Transportation Department.

An overdue deal on a Federal Aviation Administration reauthorization could draw more interest than usual from the energy industry.

The must-pass legislation, which had been mired in fights over privatizing air traffic, now seems headed for the home stretch in both chambers. And members will look to tack on stand-alone bills, including energy exploration legislation.

One possible rider is a proposal sponsored by Rep. Francis Rooney of Florida and eight other Republicans, which would permanently extend the moratorium on offshore leasing and drilling in certain areas of the Gulf of Mexico.

Florida Republican Rep. Matt Gaetz, a co-sponsor of the Rooney bill, said supporters are looking at the FAA reauthorization package as a vehicle for extending the current moratorium, which runs through 2022.

An overhaul or a short-term extension of the Land and Water Conservation Fund looms by Oct 1.

The fund, which uses nontaxpayer money to preserve and maintain the nation’s parks, forests, recreation areas and cultural sites, will expire Oct. 1 unless Congress reauthorizes it. Lawmakers backed a three-year renewal in 2015 after several short-term extensions.

More than two dozen House Republicans sent Speaker Paul Ryan (R-Wis.) a letter last month calling a permanent reauthorization "must-pass" legislation. There are proposals from top Natural Resources Committee members in both parties to do so.

Natural Resources Chairman Rob Bishop (R-Utah) said he believes any renewal must come with more oversight of LWCF to ensure its dollars are properly disbursed. He has criticized it as a "slush fund" for federal administrators looking to curry favor with special interests rather than furthering the aim of conservation.

"If we actually did something useful with that money, then I’d be advocating to increase from the $300 million to the $900 million," he said earlier this year, referring to the level at which it’s authorized but not funded. Its annual funding level typically has been about half that.

Paul Eaton, managing director of the Vet Voice Foundation, said one of his group’s main priorities right now is obtaining full and permanent authorization for LWCF.

The nonprofit organization encourages veterans to get engaged on a variety of public policy issues, including land policy and conservation.

"I make a tour of congressional offices every three months," said Eaton. "I always include Speaker Ryan’s office in that tour," he said, adding that Ryan is "a big outdoors guy."

Congress may seek a cease-fire in the Trump administration’s ongoing trade spats.

While congressional Republicans so far have shown little appetite for a legislative showdown with the president over his trade policies, his proposal to slap tariffs on tens of billions of dollars of Chinese imports continues to worry the GOP.

"I’m not a fan of tariffs, and I am nervous about what appears to be a growing trend in the administration to levy tariffs," Senate Majority Leader Mitch McConnell (R-Ky.) told the Louisville Courier-Journal last week at home in Kentucky.

"This is a slippery slope," he said, "so my hope is that this will stop before it gets into a broader tit-for-tat that can’t be good for our country."

While both the fossil fuel and renewable sectors have raised concerns over Trump’s trade moves (E&E News PM, March 22), China’s retaliatory moves against U.S. agricultural products are drawing the ire of farm-state lawmakers such as Iowa Republican Sens. Chuck Grassley and Joni Ernst.

Ernst spoke directly with Trump over the matter last week, while Grassley noted last week that he had warned Trump in February that China would retaliate against U.S. agriculture interests if he went ahead with threatened tariffs.

The House Agriculture Committee might release a draft of the farm bill this month with a possible markup soon to follow.

In the House, Agriculture lawmakers are in a disagreement about the Supplemental Nutrition Assistance Program, formerly known as food stamps. Conservative Republicans want to scale back the program, while Democrats are pushing equally hard to preserve it.

Also possible are provisions meant to help farmers who would be affected if China makes good on a threat to impose 25 percent tariffs on American agricultural products such as pork and soybeans. Agriculture Secretary Sonny Perdue said last week that the administration was mulling ideas.

It’s an open question, farm bill stakeholders say, whether Congress can complete a bill this year, let alone before the 2014 farm bill’s expiration at the end of September.