It isn’t easy being green — just ask those who are 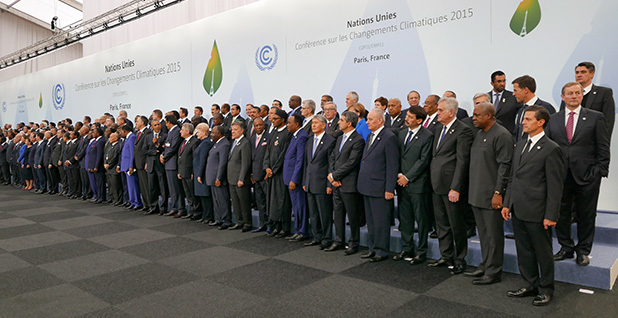 More than 150 leaders traveled to Paris last year to sign a global warming accord. But they flew to get there. Is that wrong? Photo courtesy of Wikipedia.

How small must a climate scientist’s carbon footprint be? How about a celebrity who calls for environmental protection? Or a politician?

Champions of the environment say they try to practice what they preach. But they also argue that demanding proof of eco-purity is a smokescreen used by climate skeptics and irrelevant to the larger issue of creating a systemic change in how people use energy.

"We will not solve the climate problem by telling people they can’t have toast," said Ken Caldeira, an atmospheric scientist at the Carnegie Institution for Science. "We will solve it by making sure that the wire from the toaster is connected to a wind turbine or a solar panel and not a coal plant."

From former Vice President Al Gore to "hockey stick" climate curve scientist Michael Mann, those who put themselves in the climate change limelight feel the heat. "Leonardo DiCaprio Takes Private Jet to Accept Environmental Award," blared Us Weekly magazine after the Academy Award-winning actor was honored by a clean water advocacy group in May. The New York Post similarly slammed President Obama for taking Air Force One to Paris last year to join "jet-setting representatives" from nearly 200 other countries to sign a climate change accord.

Conservative magazine National Review took aim at actor and anti-fracking activist Mark Ruffalo. Citing the fame he’s won for the role of Dr. Bruce Banner/The Hulk in "The Avengers" movie series, the piece opined that "Perhaps playing a character with two different personas has taught him how to lead the double-standard life of a typical Hollywood environmental hypocrite; one day, you’re flying to award ceremonies and making energy-guzzling action movies, the next day you’re raging against the very industries and technologies that make your comfortable lifestyle possible."

Even the pope is not immune to attack. After Pope Francis released his environmental encyclical calling for climate action, a piece in the National Catholic Reporter noted the "darling of environmentalists" was poised to depart on a high-carbon Latin America tour. "The pope’s journey from Rome to Ecuador, Bolivia and Paraguay will inevitably involve a considerable amount of air travel, known to be a form of transportation that is incredibly damaging to the environment," the piece said.

Increasingly, academics are entering the fray. A recent study published in the journal Climatic Change found people are more receptive to scientists they perceive as "green" (E&ENews PM, June 16).

Meanwhile, a growing body of scientific literature is trying to tease out what impact celebrities can have on public engagement around climate change. The latest is an upcoming special issue of Environmental Communication devoted to the growing prominence of media and celebrity in environmental policies and how they are shaping the way we think about climate solutions.

Max Boykoff, an associate professor of environmental studies at the University of Colorado, Boulder, and a contributor to the upcoming special issue, said he has been intrigued by celebrities because of their power to inspire and to shape behavior change.

He said on the one hand, celebrities run the risk that their climate message is brushed off as a "fashion or fad" or that they are engaging in individual actions, which undermine larger societal momentum on climate change. But overall, he and others have concluded celebrities who take up the green megaphone create a net-positive by getting the public to think about climate change.

"U2 frontman Bono has commented, ‘Celebrity is a bit silly, but it is currency of a kind,’" Boykoff said. "This currency provides access to many people and places, from top leaders and everyday people to the podium at the U.N. and to people’s living room every evening."

This power allows celebrities to reach an audience scientists may not. Media cover celebrities because people are curious and interested. It can also drive scrutiny when a celebrity preaches climate action but doesn’t follow through.

But James Taylor, president of public policy organization the Spark of Freedom Foundation, said movie stars are often self-contradictory both in their own personal actions as well as in the policies they support.

Taylor, who is also a senior fellow at the Heartland Institute, said if the Hollywood elite were to "to talk to their friends on the left to say, ‘There’s give and take and support for zero-carbon solutions like hydropower, natural gas and nuclear,’ they would see there are solutions that could drastically reduce carbon dioxide emissions now."

Edward Maibach, a professor of communication at George Mason University, offered a few truisms to explain the backlash.

"No one respects a hypocrite," he said. "No one expects a celebrity or a climate scientist or anyone else to live a lifestyle of deprivation as a means of responding to climate change."

That mirrored the findings of the recent study on how the personal actions of scientists affected how the public perceived their work. Be the change you wish to see, the authors concluded.

Scientists chafe at the assumption they are advocates

Some scientists pushed back against its findings. Mann, a climatologist at Pennsylvania State University, said this sort of argument is "offensive."

To understand why, consider the study, which surveyed about 5,000 people online and provided them with a scenario. All the scenarios featured a climate scientist — who is also an advocate — telling people that their personal choices can have a negative effect on the environment. The scientist then urges people to fly less, cut their energy usage and take public transportation.

The scenario was constructed based on the very real experiences of climate scientists who are constantly harangued about their carbon emissions, said Shahzeen Attari, an assistant professor at Indiana University and the study’s lead author. She and her colleagues were trying to learn how climate scientists can minimize such attacks.

"You can defend best against those attacks by making sure you are making a good effort to conserve energy personally," said David Krantz, a professor of psychology at Columbia University and a co-author of the study.

Some climate scientists took issue with the central figure in the study — the scientist-advocate who tells people what to do.

Scientists have, for many years, grappled with the limits of their influence and the perils of advocacy. National surveys have found scientists struggle to gain the public’s trust when they wander into the realm of policy (Greenwire, June 9, 2012).

As a result, scientists try to hew to strict lines when they champion policy measures. Piers Forster, a climatologist at the University of Leeds, said that scientists who choose to do so should be clear about where their science stops and advocacy starts.

"As a scientist, it is not my job to tell people what to do, but to tell people the effects of their choices," Forster said. "I wouldn’t end a science talk by urging action."

Forster said he sometimes advocates climate action but does so in a personal capacity, divorced from his day job. Because he cares about the environment, he tries not to fly much, eats less meat and has reduced his collection of "stuff."

Forster said his advocacy focuses on government, not personal action — a distinction drawn by some other scientists, as well.

It is possible — and necessary — to solve the climate problem without disrupting people’s lifestyles, Mann wrote in a Facebook post. Climate scientists do not have to become "climate role models" in order to be taken seriously, he said.

In response to a ClimateWire request, some scientists said the "practice what you preach" approach fits with their common-sense understanding.

Mann gets his electricity from wind power, drives a hybrid vehicle, recycles and reduces energy use. But all that is irrelevant, he wrote. To solve rising emissions, governments must enact a price on carbon, he said.

Mark Jacobson, an atmospheric scientist at Stanford University, is one of the foremost proponents of the idea that the entire world, from the United States to the small isles of the Mediterranean, can be powered by 100 percent renewable energy (ClimateWire, June 2). That is, using wind, hydropower and solar.

Jacobson has his measure of critics, but none could accuse the scientist of running up a large personal carbon footprint. Jacobson is building a $1.5 million, 3,200-square-foot home that will not use natural gas. His cars, stove, water heater, air heater and barbecue will run on electricity that will be produced by rooftop solar panels. The electricity will be stored in giant Tesla batteries in the garage for peak usage.

Jacobson also tries to live a sustainable life, he said. He rarely flies to conferences, preferring to do two-thirds of his presentations remotely. The rest are done within driving or biking distance. He drives an electric car.

"I believe 100 percent of all people, not just scientists or celebrities, have an ethical responsibility to transition to 100 percent clean, renewable energy in terms of what they can control," Jacobson said.

Maibach, at George Mason University, said scientists do not necessarily have an ethical obligation to reduce their carbon footprint. But if they want the public to seriously consider the implications of climate science, they should.

"My family and I have made major gains in reducing our family’s carbon footprint, and we continue to make gains," he said. "The more we reduce our fossil fuel use, the better, I feel."

Living a more sustainable lifestyle is an ethical dilemma that confronts all people — not just climate scientists or advocates or even celebrities.

Attari, the lead author of the study, acknowledged that lifestyle changes are not easy for everyone. Though she has reduced her energy and water usage, she flies regularly to India and East Africa, and those trips are unnegotiable.

"In terms of my flying, it’s a pretty large problem, and I don’t really have any clear solution of how to get around that," she said.

Telling people to change their behavior on a personal level is a "quixotic endeavor, bound to fail," Caldeira added.

The Carnegie Institution for Science’s Caldeira said he travels by Vespa scooter, heats his home very little and tries not to waste electricity. He flies a lot — an average scientist emits about five times as much CO2 as an average Indian due to air travel — but his department buys carbon offsets.

But he argued that nations need better energy and transportation systems so people can meet their demands without affecting their environment. Ignoring that elephant in the climate policy room and instead telling people to exercise self-restraint and change their lifestyles will backfire and undercut more meaningful climate action.

"It is not surprising that people look at the individual emissions of researchers and use that to gauge the researcher’s moral standing," Caldeira said. "But I think that is because too many people have put too much emphasis on what we can do as individuals and too little emphasis on how we need to act collectively to solve our problems together."