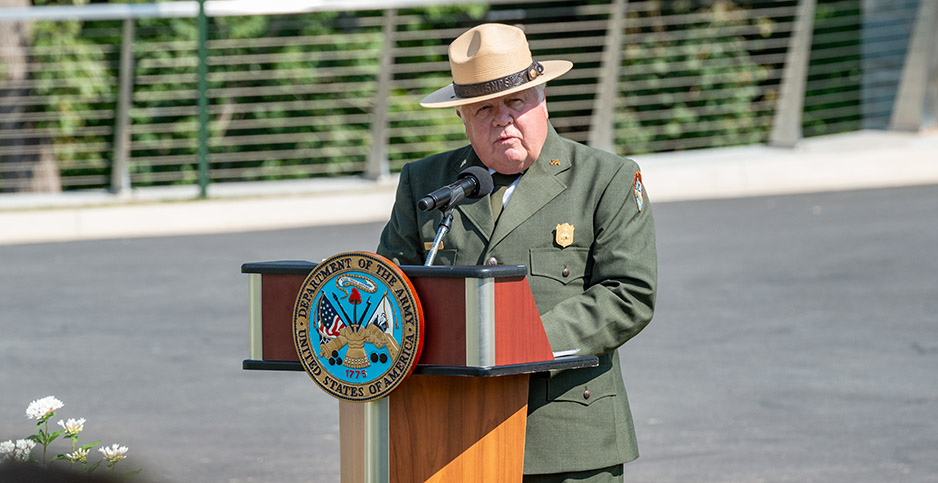 The National Park Service today defended its hiring of former acting Director P. Daniel Smith for a job in North Carolina that appeared to be posted just for him.

In an official posting, NPS officials described the position as a telework job that paid up to $166,000 a year and was based in Cary, N.C., where Smith moved after leaving the agency’s Washington headquarters in September.

The job post went up in October, after Interior Secretary David Bernhardt announced Smith would be taking a new assignment in North Carolina. He’s now the agency’s "national commemorations coordinator."

It’s the latest twist in the strange saga of Smith, the controversial ex-acting chief who last week was accused by an anonymous group of NPS employees of missing work, skipping meetings and generating no real work while drawing more than $50,000 in paychecks (Greenwire, Feb. 13).

Calling Smith a "high-salary ghost employee," the advocacy group Public Employees for Environmental Responsibility wants the Interior Department’s inspector general to investigate both Smith’s whereabouts and whether the job posting was illegal.

PEER’s senior counsel Peter Jenkins said yesterday that it appears that whoever hired Smith for the new GS-15 civil service position "undertook the illegal prohibited personnel practice of favoritism on his behalf."

"I am no [human resources] specialist, but it sure appears to be hinky," Jarvis said yesterday.

Jarvis, who left the agency in 2017, said Smith served as a political appointee during the George W. Bush administration, then got hired into a career job as superintendent of Colonial National Historical Park, retired and returned in 2017 to work in a political position for the Trump administration.

"Now another career job? To the victor go the spoils," Jarvis said.

Jenkins cited a federal law that makes it illegal to "grant any preference or advantage not authorized by law, rule, or regulation to any employee or applicant for employment (including defining the scope or manner of competition or the requirements for any position) for the purpose of improving or injuring the prospects of any particular person for employment."

"Setting the position in his hometown of Cary, N.C., where there is no NPS facility — and the very short announcement tailored toward his background — appeared to obviously advantage him as far as the ‘scope or manner of competition’ and other requirements," Jenkins said.

The Park Service said it did nothing wrong in giving the new job to Smith.

"We understand an inquiry into his hiring has been forwarded to the inspector general’s office; we await their response," Picavet said.

The discovery of the job posting was first reported over the holiday weekend by National Parks Traveler, an online publication, after PEER wrote a letter to the IG requesting an investigation on Feb. 10.

Under his arrangement with the Park Service, Smith is supposed to lead the agency’s efforts to celebrate the 250th anniversary of U.S. independence on July 4, 2026.

But in a complaint filed with the IG, PEER said that NPS employees had reported that Smith had done "little to no observable work in the position" and that it appeared to have violated NPS’s teleworking policies, too.

Smith was the second of three acting directors to serve under the Trump administration. The Park Service has been without a permanent director since Jarvis left in 2017.

PEER called Smith a "no-show" in his job and said he’s part of an "unprecedented leadership vacuum," with 10 of the top 15 slots now vacant or filled by acting appointees and major parks — including Grand Canyon, Yosemite and Grand Teton — having no permanent superintendents.

"The Park Service is suffering from a multibillion-dollar maintenance deficit, and it can ill afford high-salary ghost employees," said PEER Executive Director Tim Whitehouse. "Keeping so many leadership slots unfilled by permanent jobholders hobbles management and means that major decisions affecting our national parks are increasingly made by political appointees in the Interior secretary’s office."

Smith has been investigated by the IG’s office at least twice before.

In 2004, he helped Washington Redskins owner Daniel Snyder in his effort to cut down more than 130 trees on an NPS-protected easement near Snyder’s property so he could get a better view of the Potomac River.

The inspector general said that Smith had unduly influenced deliberations with officials at the Chesapeake & Ohio Canal National Historical Park "by inserting himself in the process through personal communications" with Snyder, Snyder’s attorneys and park officials.

Two years ago, the IG investigated Smith after an employee complained that he had made a crude gesture during a hallway conversation (Greenwire, June 4, 2018).

The IG found that Smith’s behavior did not constitute harassment, but he apologized to NPS employees for behavior that he said was "inappropriate to the workplace." Nancy DiPaolo, spokeswoman for the IG’s office, said this afternoon that the office had received the latest complaint on Smith "and are in the process of reviewing it."