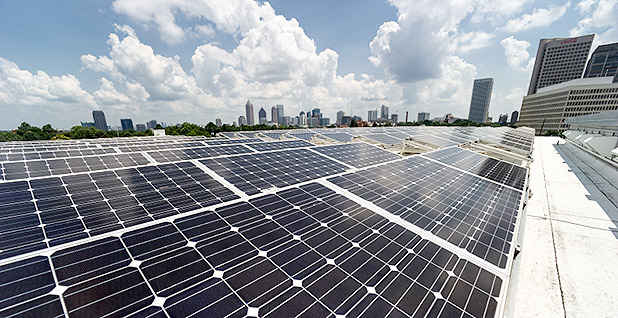 The U.S. International Trade Commission ruled today that imported solar panels and modules are causing "serious injury" to U.S. manufacturers, giving President Trump the final say about tariffs in a high-profile case that could unravel the American solar industry.

In a 4-0 vote, the commission found Suniva and SolarWorld Americas were harmed from a flood of cheap solar equipment, primarily from Chinese-backed companies in Asia. Two of six commissioners were absent from the bipartisan panel.

Next comes the remedy phase, in which the ITC could recommend tariffs, price floors or some other option in November.

The matter will be decided by Trump, who will determine by mid-January whether remedy is needed, and whether there should be trade barriers. The president could either accept the commission’s recommendations or prepare his own response.

"Under the law, the president can do what he wants in the end," said Paul Nathanson, a spokesman for the Energy Trade Action Coalition, which opposes tariffs.

White House spokeswoman Natalie Strom said in a statement that "the President will examine the facts and make a determination that reflects the best interests of the United States."

"The U.S. solar manufacturing sector contributes to our energy security and economic prosperity," she said.

Solar companies are requesting a minimum floor of 78 cents a watt on photovoltaic modules and a tariff of 40 cents on solar cells — which could more than double existing prices of solar panels. Unlike earlier country-specific trade cases, a final decision would affect the global industry.

Tariff opponents warn that price increases on components could stall the U.S. solar industry’s rapid growth. Suniva and SolarWorld counter that trade barriers are needed to revive a solar manufacturing industry struggling to compete against a glut of cheap panels made by companies that they say are dodging existing trade protections.

The wild card is Trump. Last month, Axios reported that the president had said "bring me some tariffs" in the Oval Office about a separate China trade case, prompting some to say it signals he would view solar tariffs favorably.

"President Trump could use the Suniva proceeding — which targets a relatively narrow energy subsector — as a test case for the tough-on-trade, ‘America First’ agenda he reprised during his Sept. 19 U.N. General Assembly speech," said Timothy Fox, a vice president at ClearView Energy Partners.

Trump’s solar decision could serve as a prototype for future protectionist efforts, including action on steel, he said.

One thing is for sure: The ITC vote today will trigger a new wave of intense lobbying.

Opposing tariffs is most of the solar industry. Utilities like Duke Energy, conservative think tanks supportive of free trade, and members of Congress are worried about the impact of price spikes on jobs. Investment banks like Goldman Sachs released notes this year saying that trade barriers could prompt a sharp plunge in U.S. solar installations (Greenwire, May 5).

"The ITC’s decision is disappointing for nearly 9,000 U.S. solar companies and the 260,000 Americans they employ. Foreign-owned companies that brought business failures on themselves are attempting to exploit American trade laws to gain a bailout for their bad investments," said Abigail Ross Hopper, president of the Solar Energy Industries Association.

On a conference call, she said she wasn’t concerned that the White House only mentioned "solar manufacturers" in its statement rather than the whole solar industry, signaling sympathy for Suniva and SolarWorld. Solar manufacturing is an important part of the industry, despite SEIA’s disagreement with two companies, Hopper said.

Gregory Wetstone, president of the American Council on Renewable Energy, said the clean power industry will spend the coming months urging White House officials to "focus on strategies that boost domestic manufacturing without interfering with the fundamental economics and cost-competitiveness of solar power."

Suniva, which filed for bankruptcy this year, and SolarWorld Americas say the solar industry and its allies are engaging in scare tactics in warning of more than 80,000 lost solar jobs. They note that the ITC’s staff report found that 30 U.S. crystalline-silicon solar technology manufacturing sites have closed down since 2012.

"We brought this action because the U.S. solar manufacturing industry finds itself at the precipice of extinction at the hands of foreign market overcapacity," the company said in a statement after the vote. "President Trump can remedy this injury with relief that ensures U.S. energy dominance that includes a healthy U.S. solar ecosystem and prevents China and its proxies from owning the sun."

The companies also deny claims that they have an ulterior motive of a federal bailout (E&E News PM, Sept. 20).

The solar case was the first filed in almost two decades under Section 201 of the Trade Act of 1974. At the time, the steel industry was seeking tariffs in a separate case under the same law, but the bid was withdrawn after multiple countries threatened retaliation. The steel industry is now backing the solar manufacturers.