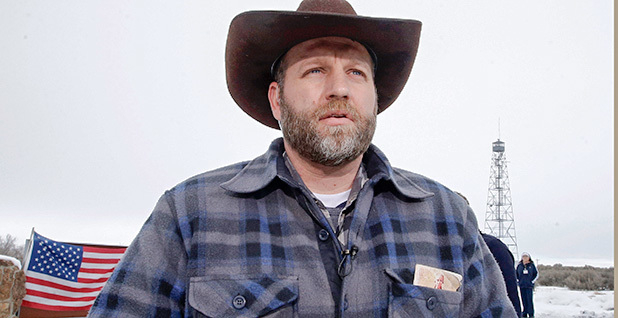 A federal judge yesterday dismissed a juror in the trial of Ammon Bundy and six co-defendants charged for the occupation of the Malheur National Wildlife Refuge last winter. Photo courtesy of AP Images.

The judge in the trial for occupiers of the Malheur National Wildlife Refuge yesterday dismissed a juror for alleged bias.

The move came a day after a question from the jury raised concerns that the juror was biased, presumably in favor of the prosecution.

Another question submitted by the jury to the judge suggested that the jurors had reached a verdict for three of the seven defendants but were at a standoff on the others — a troubling sign for the prosecution.

The court randomly selected an alternate, who will begin deliberating with the jury this morning in Portland, Ore.

Brown directed the jury that they are to start over in their deliberations.

She added that there was "good cause" to dismiss Juror 11.

Concerns about the juror arose after another juror submitted a note to the judge written in all capital letters that asked if a former BLM employee "who opens their remarks in deliberations by stating, ‘I am very biased … ‘ be considered an impartial judge in this case."

Defense attorneys sought to capitalize on the note. Ammon Bundy’s attorney, Marcus Mumford, quickly filed a motion to remove the juror or declare a mistrial.

The juror’s former BLM employment was known during the jury selection process, and defense attorneys did not move to have the juror removed from the pool.

Brown randomly selected alternate Juror 18 to replace Juror 11. Juror 18 is a woman from central Oregon who works as a legal assistant. The new jury will be nine women and three men.

The judge called the developments "extraordinary" and instructed the jury to "start over" with the new juror.

Tung Yin, a Lewis & Clark Law School professor who has been tracking the case, said the note about Juror 11’s impartiality put Brown in a bind.

The only way to determine whether the juror was, in fact, acting in a biased manner in deliberations would have been to interview each juror. And in that process, Yin said, Brown would run the risk of inadvertently affecting their deliberations.

"No matter how careful you are trying to be," Yin said, "you would inevitably be influencing the jury."

Andrew Chongseh Kim, a Concordia University School of Law professor, said that by dismissing the juror, Brown negated a claim that the defendants could have raised in an appeal.

"Dismissing Juror 11 helps ensure the defendants’ right to a fair trial and the appearance of a fair trial," he said. "It also reduces the chances that any convictions would be overturned on appeal."

Yin added, though, that he would have thought that the defense would have sought to use a peremptory strike to remove Juror 11 from the pool before the trial because of his past work for BLM.

"Was the pool so awful that they didn’t want to use a strike on this guy?" Yin asked. Juror 11, they would have to think, would look at the federal employees involved in the case and think "that could have been me 20 years ago."

Bundy and the six co-defendants are charged with conspiring to impede federal officials through the use of threats, force or intimidation during the 41-day armed standoff that ended Feb. 11 on the 188,000-acre refuge in southeast Oregon. Some of the defendants face other charges, as well, including bringing firearms onto federal property.

A second note passed to the judge from the jury could be more alarming for federal prosecutors.

The same day that allegations of Juror 11’s bias were raised, two notes suggested that the jurors were at an impasse regarding a majority of the seven defendants.

"If we are able to agree on a verdict for 3 of the defendants; but are at a standoff for the others, does our decision for the three stand? Or does this become a mistrial for all the defendants?" the jurors wrote.

A second question asked if the jury can agree on some charges, but not others, would those verdicts stand or would there be a mistrial for all defendants.

The judge has instructed the jury that it may return unanimous verdicts for some defendants and charges but not others. For the others, the government would have the opportunity to retry the case, if it chose to do so.

One defense attorney immediately responded that the notes meant at least one defendant would be acquitted.

The jury may shift course as deliberations continue. It could also reverse itself when it reconsiders the evidence with the addition of the new juror today.

Yin said some of the confusion may stem from the main charge in the case. Conspiracy, he noted, is generally considered easy for prosecutors to prove (Greenwire, Sept. 21).

To do so, prosecutors must show that there was an agreement to break the law and that some action was taken in furtherance of that agreement. The action itself does not have to be unlawful.

Yin noted, however, that in most criminal conspiracy cases, the prosecution cuts a deal with one of the conspirators who pleads guilty. That conspirator then testifies against the other defendants about when the agreement was made and action was taken.

In the Oregon standoff case, that doesn’t exist. Instead, the prosecution is relying largely on social media posts, videos and other messages.

"Here," Yin said, "the social media is fairly strong evidence, but you do have to draw some inferences."