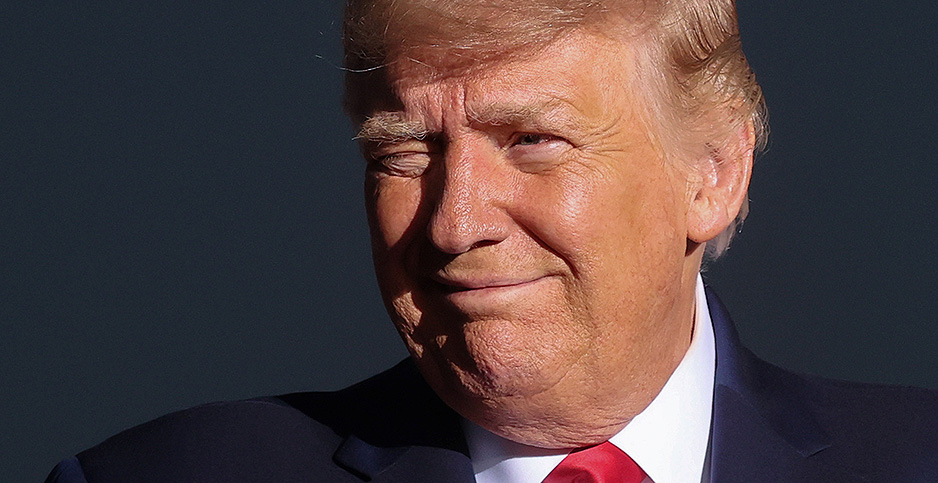 President Trump winks at a supporter during a rally in Nevada on Saturday. Trump is embracing climate denial as he navigates questions about his leadership during a series of natural disasters. Jonathan Ernst/REUTERS/Newscom

The Republican Party has spent several years crafting a climate message that moves the GOP away from its denier past.

He revealed having a deep distrust of scientists and claimed that temperatures will begin cooling soon, even though the global average has increased 2 degrees Fahrenheit over 140 years.

By flatly rejecting scientific evidence of warming so close to an election, Trump is weakening his prospects for reelection in a race where climate change is an accepted fact among many Republicans, said Doug Heye, a longtime GOP strategist and former spokesman of the Republican National Committee. Trump’s claims also threaten down-ballot candidates.

"It’s a setback and hurts Republicans in their efforts in congressional and statewide races this cycle," Heye said. "But it also makes it harder for Republicans moving forward because the issues of climate change is of dramatically higher concern for younger voters than it is older voters, and how you vote when you’re 22 or 27 is a very good predictor of how you’re going to vote when you’re 52 or 57."

Yesterday, Trump was pressed repeatedly on his assertions about climate change, including by reporters on Fox News. Brian Kilmeade, host of "Fox & Friends," asked Trump to acknowledge that rising temperatures are a problem that people younger than 35 care about.

Trump answered in a way that contradicted his administration’s moves to weaken or erase rules that reduced greenhouse gases from the power sector and from vehicles.

"If you’ve got a hundred scientists, and 99 believe one thing and one believes the other, there really aren’t two sides worthy of equal time, and so climate change is real and we need to make sure that we’re dealing with that in an effective way going forward," Edwards said yesterday on MSNBC.

Trump’s comments reached a far larger audience than just the talking heads on cable news. His rejection of climate science on Monday, uttered as he was receiving a briefing by California officials on the state’s deadly wildfires, was noted in newspaper headlines around the country, including in swing states.

"Science denied. President Donald Trump cast doubt that climate change was playing a part in the wildfires burning in the Pacific Northwest," read The Gazette in Janesville, Wis.

Public opinion is steadily shifting away from pure climate denialism. Polling has consistently shown that young Republicans want the party to do more to address the issue.

In response, the GOP has tried to craft messages its members can live with: Plant a trillion trees, spend money on carbon capture technology, and invest in research and development for energy technology.

Most Republican lawmakers in Congress have not sought to meaningfully constrain the use of fossil fuels, the driving force behind human-caused climate change.

Rep. Matt Gaetz, a Florida Republican and a close ally of the president, has said the party has "too many deniers." House Minority Leader Kevin McCarthy (R) of California has said the party needs a climate policy that meets the concerns of its younger voters.

Former Rep. Carlos Curbelo (R-Fla.) said Trump is alienating key voters, especially suburban Republicans with college degrees, when he dismisses climate science during a deadly event clearly linked to global warming. Curbelo said that with Trump’s comments on Monday, it was a "bad day for Republicans."

"The headlines the president generated yesterday were extremely deflating for a lot of Republicans, and it’s exactly that type of attitude from the president that repels the kind of voters that he needs if he’s going to close the gap with [Democratic nominee] Joe Biden in a lot of these swing states," Curbelo said.

He added that Trump’s comments reminded him of the time he and Trump were in the presidential limousine in 2018 on Key West. Curbelo said he asked Trump to take climate change more seriously, particularly sea-level rise. Ocean water was a few feet lower than the road they were driving on.

"He said, ‘I’ve studied millions of years of history, and you have nothing to worry about,’" Curbelo said.