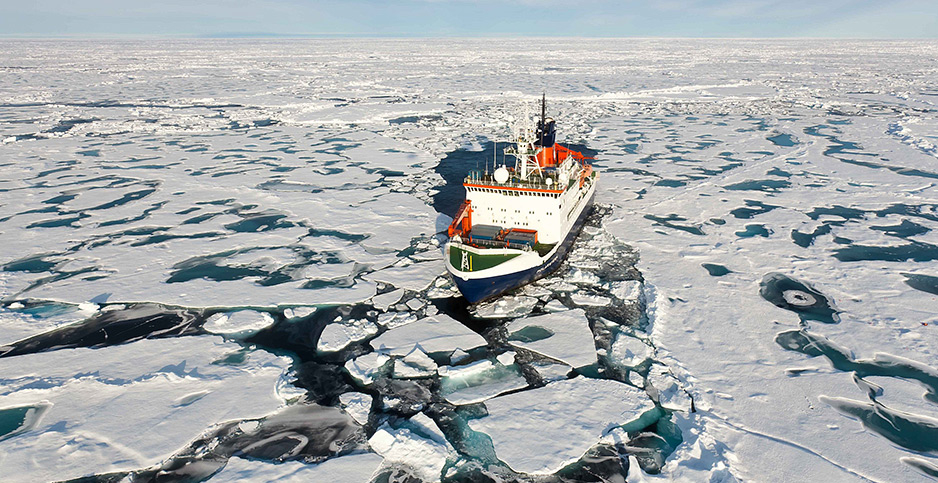 German icebreaker Polarstern is moving through time zones in search of the right Arctic ice floe. The ship is pictured in 2011. DPA/ABACA/Newscom

ON BOARD AKADEMIK FEDOROV, Barents Sea — The switch to daylight saving time can be traumatic on the body. Studies have linked the time change to a temporary spike in all kinds of adverse health effects, from accidents to heart attacks.

For the past 10 days, it’s been daylight saving day almost every day on Akademik Fedorov. We’ve moved the ship’s clock forward by one hour on six separate occasions since leaving Tromsø, Norway, on Sept. 21.

We’ve had no heart attacks on board, luckily — but making it to breakfast is a little harder each time. (Personally, I suspect a recent spate of sniffles around the ship may be linked to the stress of sleep deprivation.)

We’re now 12 hours ahead of U.S. Eastern Time and hoping this will be the last switch.

For most people in the United States these days, daylight saving time is more symbolic than practical. But here in the Arctic, the expedition has been fighting to maximize sunlight.

As we’ve moved northeast across the Arctic Ocean, the sun has been rising a little earlier each day. Even after six time changes in a row, it’s still bright enough to see by 4 a.m. or so. On the other hand, the light fades by midafternoon.

For the time being, we’re still getting eight or 10 hours of decent light each day — but it’s rapidly declining. Starting Wednesday, the sun will no longer rise above the horizon. In the weeks following, the small bit of light that remains will rapidly diminish, and the central Arctic will enter the long, dark winter period known as polar night.

It’s been critically important for the researchers to make the most of our daylight as they can. Experts on both Akademik Fedorov and Polarstern have spent much of the past few weeks conducting intensive surveys of nearby ice floes, both by helicopter and on the ice. It’s tricky, dangerous work that can only be done in fair weather and good sunlight.

They’ve been looking for the perfect floe to use as home base for Polarstern’s yearlong drift across the Arctic Ocean. This is the place where Polarstern will dock, set up its scientific equipment, cut its engines and freeze in for the long journey.

In the meantime, researchers on both ships have been unloading, assembling and testing as much equipment as they can while they wait for the final decision.

Once the Polarstern docks at the magic floe, the scientists will begin building their research camp on the ice. At the same time, Akademik Fedorov will sprint around in the nearby waters, setting up a network of secondary science stations on smaller floes.

All the while, they’ll be racing the shortening daylight hours.

Once Akademik Fedorov has finished the network and completed its mission, it will begin the journey back to Tromsø. On the return trip, we’ll gain back the hours we lost on the way up.

For now, I’ve been thinking of the clever states in our nation, like Arizona and Hawaii, that decline to participate in daylight saving. I think they have the right idea.