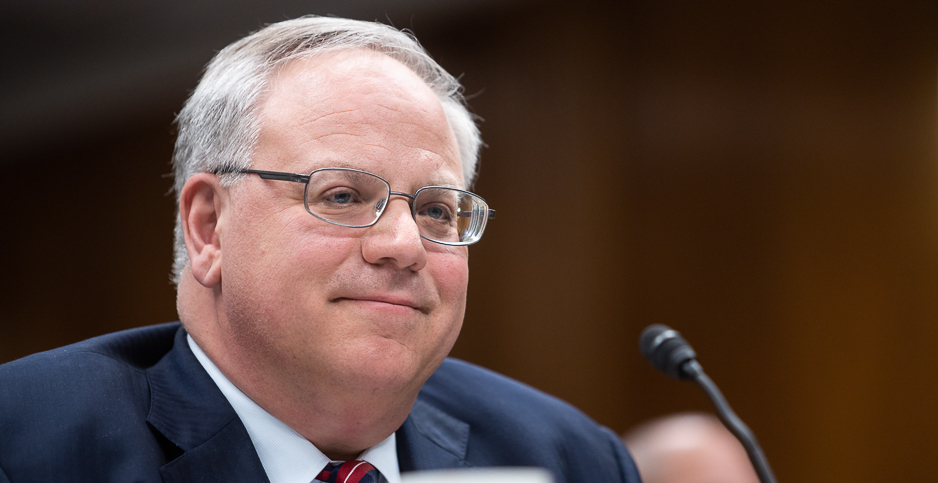 Offshore oil operators have pressed Interior Secretary David Bernhardt for royalty relief during the oil crisis, but the secretary recently told a lawmaker his hands are tied. Francis Chung/E&E News

Small offshore oil operators are still clamoring for the Interior Department to offer royalty relief, despite frustration over what they describe as the Trump administration’s deaf ear to their plea for aid during the coronavirus pandemic.

A handful of independent firms spent much of April — one of the worst months for oil and gas on record, fueled by the pandemic-driven price drive and demand bust — pulling political levers to get royalty cuts.

Louisiana’s congressional delegation and other oil-friendly senators went to bat for the idea early on (E&E Daily, May 8).

But while cuts have been a tool for previous administrations and support for the oil sector is a signature of President Trump’s political brand, the topic has proved dead on arrival (Energywire, April 13).

Following Hurricane Katrina’s pummeling of the Gulf Coast in August 2005 and Hurricane Rita weeks later, the Minerals Management Service — the predecessor to the Bureau of Safety and Environmental Enforcement — quickly cut the two-step application process for royalty relief down to one and delayed due dates for payment.

The offshore industry has asked for something similar due to COVID-19.

But experts and former officials say the Trump administration is likely reluctant to boost production due to the global glut of crude and the political tightrope of the recent price war between Saudi Arabia and Russia.

"Royalty relief is typically used to maintain or increase production," a former BSEE regulator said. "It doesn’t appear to be the right tool to use in a period of excessive surplus — especially when other countries are being asked to reduce production."

With prices historically low — even dipping into the negatives for the first time in history — royalty revenue for the federal government is already crashing, he said.

"I think it is more apolitical," Gould said of the administration’s reticence. "I think the economists are saying, ‘We can’t do that.’"

The Interior Department deferred the matter to BSEE, which did not provide comment.

The administration released new guidance in late April on how companies can apply for royalty cuts on a case-by-case basis (Greenwire, May 1). But industry and experts say the guidance offers little relief, even though Interior Secretary David Bernhardt promised expedited review during a call with operators late last month.

BSEE has set a "high evidentiary bar" for "potentially limited relief," according to Clearview Energy Partners, a research firm in Washington that published a review paper on the guidance last week.

"Not worth it," said one oil and gas operator on the condition of anonymity.

Talos Energy Inc., one of the firms that’s been public about shutting in wells due to the pandemic, disclosed in an earnings call Thursday that it believed it could weather the near-term storm.

Operators Friday said they were continuing to press for relief as the reality of their financial situation darkened. But Sen. Bill Cassidy (R-La.) said last week that additional steps to provide royalty relief are unlikely, noting that Bernhardt’s hands are tied by a lack of legal authority.

"At some point you got to go with the cards you’re dealt, and if that’s the cards that have been dealt to this situation, we just have to go with what he says," Cassidy told E&E News by phone Wednesday.

He said it’s too early to assess the effectiveness of BSEE’s guidance intended to expedite the application process for companies seeking relief.

"[It’s] TBD in the sense that Bernhardt tells me he’s doing everything he can," Cassidy said. "Industry says that they don’t think it’s going to be fast enough. Bernhardt says, ‘Well, nobody’s filed an application, but if they do I promise you I will make sure it gets through as quickly as possible.’ And now, industry has begun to file applications for royalty relief. So, let’s have the conversation again in four weeks."

With Interior stretched to its legal limits, Cassidy and other GOP senators also want to see diplomatic pressure applied to Saudi Arabia to live up to the production cuts agreed to in last month’s cease-fire with Russia over oil prices. He said he would support tariffs on Saudi imports and has introduced legislation to withdraw U.S. troops from the kingdom.

"Why do I have people from Louisiana protecting Saudi Arabia when they’re trying to undermine the economy that these young people are produced by?" he asked.

Smaller offshore operators, too, blamed geopolitics, but their anger turned largely to Trump for a lack of support despite his "energy dominance" promises.

"He just doesn’t get our industry," said one person familiar with the talks between Interior and operators, noting the president’s celebratory tweets whenever oil prices fall.

Proponents of the royalty relief effort say the consequences will play out shortly as pressure mounts on offshore oil and gas firms.

"If his administration doesn’t come to its senses and grant the broad royalty relief it is empowered to grant," one source said, "this president’s legacy will be this: He sat idly by while the independent oil and gas industry was irrevocably destroyed."