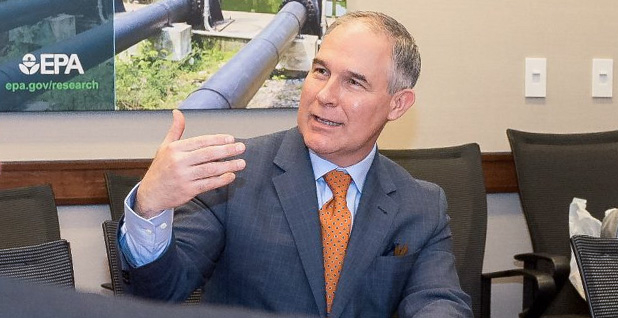 President Trump will try to land a knockout blow on his predecessor’s sprawling climate agenda by issuing an executive order today targeting at least nine actions that form the foundation of U.S. efforts to cut emissions and prepare for rising perils.

The "energy independence" order, to be signed at 2 p.m. today, underscores Trump’s belief that the seriousness of climate change was overblown by the past administration and deserves to be set aside in order to revive a struggling coal industry and encourage an unbridled boom in the production of oil and gas.

A senior White House official, when asked yesterday if the president agrees with scientists who say that people are largely responsible for rising temperatures, told reporters, "Yeah, sure."

But the administration appears deeply skeptical about the extent of potential damage that climate change might cause, and the order to be signed today would leave the administration seemingly free of any policy to address the risks — both environmental and economic — that scientists have warned about for years.

"I mean, to the extent that the economy is strong and growing and you have prosperity, that’s the best way to protect the environment," the White House official said in a briefing about the order. "But certainly, natural gas is important. Clean coal’s important. Nuclear is important. Renewables are important."

Today’s executive order sets EPA on the road to rescind the Clean Power Plan, an Obama-era rule to reduce emissions at power plants 32 percent by 2030. The official said rescinding the rule could take up to three years and is bound to face legal challenges.

The order also eliminates Obama-era efforts to improve adaptation, embed climate risks in national security apparatuses, reduce agency emissions, expand the importance of climate impacts in the National Environmental Policy Act and freeze new coal leases on public land. It also begins a review of methane regulations by EPA and the Bureau of Land Management and a rule on hydraulic fracturing by BLM. And it will instruct agencies not to use the social cost of carbon when weighing the costs and benefits of environmental regulation.

The order also promotes fossil fuel production. It requires agencies to identify "all regulations, all rules, all policies [and] guidance documents that serve as obstacles or impediments to domestic energy production," the official said.

Then, in 180 days, the White House will use those agency plans to develop a "blueprint" for energy policy.

Does Trump believe in man-made warming? ‘Sure, yeah’

"I mean, we have a different view about how you should address climate policy in the United States, so we’re gonna go in a different direction," the official said. "I can’t get into what that ultimately means from an emissions standpoint. I have no idea."

The order also instructs the Department of Justice to essentially withdraw its defense of the Clean Power Plan in the U.S. Court of Appeals for the District of Columbia Circuit. Instead, it seeks to freeze the case, which is near completion, before the court issues an opinion expected this spring.

The official disputed the idea that the federal government is required to regulate greenhouse gases under Section 111(d) of the Clean Air Act.

"I’m sure there are plenty of people who disagree on that, but that’s not something we’re thinking of right now," the official said, adding that the administration is focused on unspooling the "massive" Clean Power Plan and not devising new policies to address emissions.

Environmental groups are already threatening to sue the government if it fails to aggressively cut emissions. They contend that EPA is legally obligated to drive down climate pollutants. The official, meanwhile, described an EPA under Trump that focuses not on climate change but on the agency’s "core mission" — conventional air and water pollution.

The official faced a string of questions from reporters about whether the president and his advisers believe that humans are causing climate change.

"I think the president understands there’s a disagreement over the policy response, and we’re gonna see that in the order tomorrow. We’re taking a different path," the official said.

When pressed on whether Trump believes in man-made warming, the official said, "Sure, yeah."

A campaign promise checked off

Another reporter asked if the official believes that sea-level rise could cause economic damage to major cities like Miami, New York and New Orleans, as scientists are warning.

"I’d like to see the research. Sure, that would be good. Show it to me," the official said.

The reporter replied: "So are you saying there’s not rising sea levels?"

The official answered: "I didn’t say that all. I want to see the study."

The president has sent inconsistent signals about his views of human-caused climate in the past 18 months, saying in December 2015 that it’s a "hoax," and a year later that there is some "connectivity" between people’s actions and warming.

Today’s order ushers a White House that is still reeling from last week’s remarkable legislative loss on health care into the embracing arms of the coal industry. Trump vowed last May to revive jobs in the hard-hit towns of Appalachia by erasing the Clean Power Plan.

He promised to revoke the climate rules within 100 days of taking office. It’s day 68.