‘It’s déjà vu all over again’ at Trump EPA 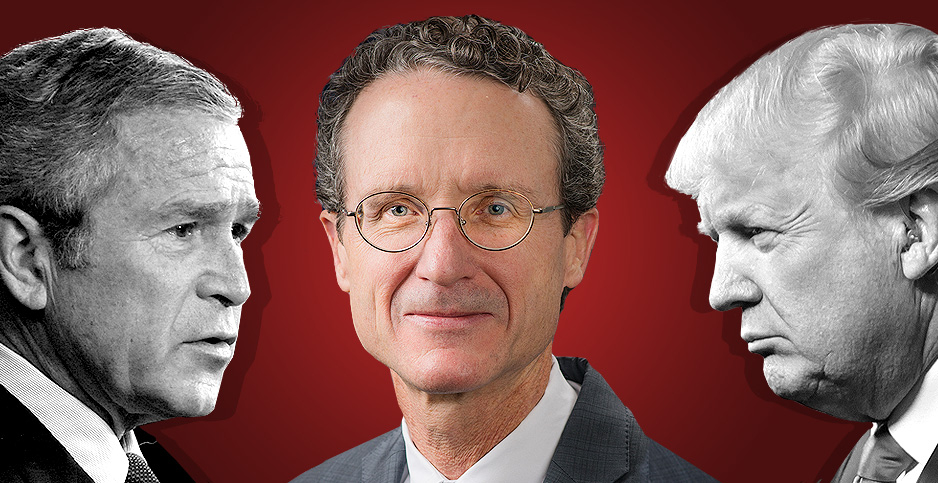 On a chilly afternoon in February, EPA air chief Bill Wehrum sat down for lunch with two other former officials in the George W. Bush administration.

At an upscale restaurant two blocks from the White House, the three men reminisced about their time serving President Bush and discussed the future of their policy priorities under President Trump.

The two other attendees were Jeff Holmstead, a former assistant administrator in EPA’s Office of Air and Radiation, and John Graham, a former head of the White House Office of Information and Regulatory Affairs.

The lunch at Occidental Grill & Seafood, which was disclosed in documents obtained by E&E News through the Freedom of Information Act, shows that Wehrum maintains close ties to Bush-era officials who remain active in Washington.

It comes as Wehrum pursues a number of regulatory rollbacks that were stymied during his time in EPA’s air office from 2001 to 2007, first as counsel and then as acting chief.

Holmstead is now a partner with Bracewell LLP, where he advises clients on EPA regulations. Graham is a dean at Indiana University and a member of EPA’s Scientific Advisory Board, which is tasked with reviewing the science behind agency rulemakings.

In an interview, Holmstead cast the lunch as an informal gathering of old friends that didn’t meet the standard of lobbying.

"Bill and John and I have worked on regulatory issues for many, many years," Holmstead said. "So we probably talked about a dozen issues. But, you know, it’s not as though we had anything in particular that we needed to lobby him on."

"Bill, Jeff and I had lunch as friends and former collaborators from the Bush 43 years," Graham said in an email. "Jeff and I were very proud to see Bill W capture the big air job at EPA."

Environmentalists who have been active in Washington for decades have seen this story play out before.

"It’s déjà vu all over again," said Paul Billings, national senior vice president for advocacy with the American Lung Association, who has been with the organization for more than 25 years.

"We are certainly seeing an attempt by this administration to revisit many of the issues that were debated in the aughts," Billings said. "New Source Review is one that comes to the top of the list."

"To some extent, when you get that job as head of the air office, your priorities are determined by things outside of your control," Holmstead said. "You had the various Obama rules that had been issued shortly before the end of the administration. So when Bill got the job, he had to deal with the Clean Power Plan and [Mercury and Air Toxics Standards] and the ozone standard. Just a whole bunch of different things."

Industry groups have been complaining about the New Source Review program for decades.

The program puts utilities on the hook for upgrading pollution controls if they propose major modifications to their facilities. The groups say the program sets unrealistic standards for new facilities and makes upgrades to existing ones prohibitively expensive.

While the Bush administration’s attempted broad-bore overhaul fell short, enough pieces survived that "we made fundamental and useful change to the program," Wehrum told an EPA advisory committee that month.

Under Trump, "the best thing we can do is be more targeted: look at narrower, but still important questions and deal with them on a one-by-one or two-by-two basis," he added.

More guidance has since followed aimed at compressing that forecasting process and making it easier for businesses to show that planned new plants or expansions will not significantly affect air quality when they are applying for permits (E&E News PM, April 18).

But the administration’s most ambitious bid to revamp the program came last month in its proposed replacement for the Obama-era Clean Power Plan (Greenwire, Aug. 21).

A section tucked into the Affordable Clean Energy plan would allow utilities and other electricity generators to substitute a more forgiving gauge for estimating the impact that a plant expansion upgrade or expansion would have on emissions.

Even the Bush administration wasn’t willing to go that far, said Keri Powell, an Atlanta-based lawyer who was involved in the NSR litigation at the time as an Earthjustice attorney.

"I feel very much that the fights I fought back then are coming back up again, sometimes in new ways," Powell said.

‘Once in, always in’

One of Wehrum’s first major moves as air chief harked back to another battle he had launched more than a decade ago.

In January, barely two months into the job, Wehrum abruptly ended a Clinton-era policy known in regulatory shorthand as "once in, always in" (Greenwire, Jan. 26).

The policy, outlined in a 1995 memo, was intended to limit industrial pollution by requiring refineries and other "major" sources of pollution to continue applying stringent air toxics emission standards even when their releases fell below the thresholds that triggered those standards.

That requirement, Wehrum wrote in his own memo, ran contrary to the "plain language" of the Clean Air Act.

Wehrum was acting EPA air chief in late 2006 when the agency pursued a similar move, although in that instance, it sought to eliminate the "once in, always in" mandate through a formal rulemaking (E&E News PM, Dec. 21, 2006).

Then, as now, the move roused opposition from environmental groups. After Wehrum left EPA in the spring of 2007, the proposed abolition of the policy quietly slipped into limbo, but it was never officially withdrawn.

Wehrum’s January decision to scrap "once in, always in" by administrative fiat came shortly after senior Senate Republicans said the policy "disincentivizes" large polluters from curbing their emissions since the same "Maximum Achievable Control Technology" requirements remain in place even if their releases fall below the benchmarks for a major source.

Environmental groups challenging Wehrum’s move in court counter that emissions will spike because plants no longer covered by the MACT standards can turn off existing pollution controls to save money.

In a news release announcing the decision to end the policy, Wehrum’s own view was clear: Repeal "will reduce regulatory burden for industries and the states, while continuing to ensure stringent and effective controls on hazardous air pollutants."

And while Wehrum has inherited many Obama-era rules, he has sometimes taken them in a different direction.

Most notably, EPA announced last month it would reconsider the 2012 Mercury and Air Toxics Standards for oil- and coal-fired power plants, even though the industry has long since come into compliance and had explicitly asked Wehrum to leave the status quo in place (Greenwire, Aug. 29).

But the planned reconsideration could have consequences for future regulatory endeavors, particularly because it will scrutinize EPA’s use of projected health savings produced by "co-benefits" to help justify the cost of complying with the mercury standards.

"People who work at policy levels in government often do so in different administrations," Susan Dudley, who served as Bush’s regulatory czar, said in an email. "Of course, career staff work across administrations as well."

Examples abound at other agencies.

At the Department of Energy, the No. 2 post is being filled by Dan Brouillette, who was assistant secretary for congressional and intergovernmental affairs at DOE under Bush.

At the Interior Department, the No. 2 position is held by David Bernhardt, whom Bush tapped to serve as solicitor of the department.

And at the Department of Transportation, Deputy Secretary Jeff Rosen was a known quantity under Bush, having served as chief counsel at DOT from 2003 to 2006 and then as general counsel at the Office of Management and Budget from 2006 to 2009.

E&E News reported in 2008 that Rosen was one of several officials who pushed the Bush administration to scrap EPA’s well-developed plans to regulate greenhouse gases from motor vehicles, power plants, petroleum refiners and other major polluters (E&E Daily, July 18, 2008).

"At the time, Jeff Rosen had left the Department of Transportation and had gone to OMB," Oge said. "So as a political appointee, he was aware of or part of EPA’s decision to basically say no to the waiver request."

Today, Rosen shows no signs of slowing down. This summer, for instance, he emerged as a driving force behind the Trump administration’s proposed rollback of Obama-era clean car standards (Greenwire, July 31).