It’s finally getting the ax. But climate skeptics want more 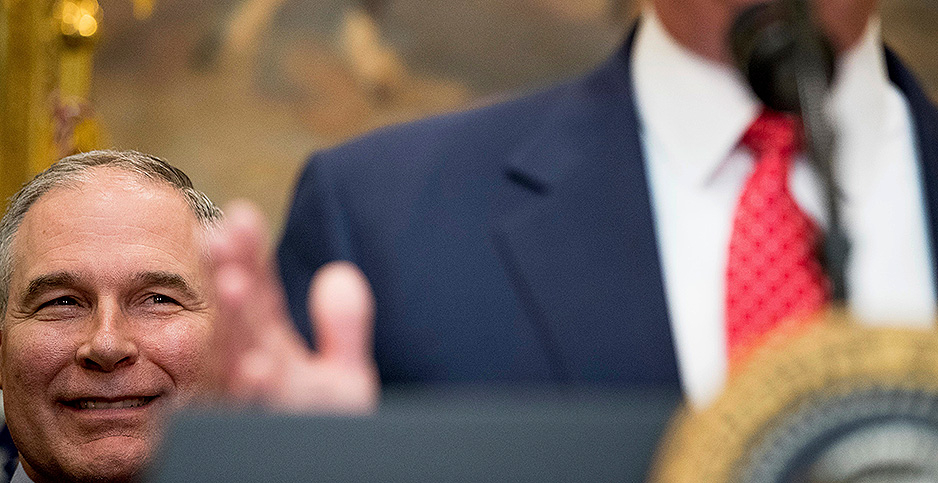 The Trump administration today will officially announce the end of the Clean Power Plan, a regulation limiting planet-warming carbon dioxide emissions from power plants. But the conservative crowd that’s skeptical about climate change says its work is just beginning.

U.S. EPA Administrator Scott Pruitt argued yesterday that the climate rule is a reflection of President Obama’s antagonism toward the fossil fuel industry, describing it as an unlawful interpretation of the Clean Air Act (Greenwire, Oct. 9).

"The past administration was unapologetic," Pruitt told a group of coal miners yesterday in Hazard, Ky. "They were using every bit of power, every bit of authority to use the EPA to pick winners and losers in how we generate electricity in this country. And that’s wrong."

For all the applause that Pruitt received, there is also disgruntlement. A backroom battle between industry officials and those anti-climate conservatives over whether to issue a scaled-back replacement rule is burgeoning. The hard-liners don’t want an alternative rule because greenhouse gases would still be regulated. And that could mark an acceptance of the endangerment finding, a mound of scientific evidence that affirms human-caused carbon emissions are at the root of rising temperatures.

Climate skeptics question if Pruitt truly wants to attack the endangerment finding. He hasn’t said yes or no publicly. He’s only offered hints. Doubts extend to President Trump, who has expressed cynicism about climate science but hasn’t focused on the all-important finding.

Some conservative skeptics doubt that Trump knows the limitations his anti-regulatory agenda faces if the endangerment finding continues to exist. The finding serves as the legal backbone for climate regulation, with many interpreting it as mandating federal action to curb greenhouse gas emissions.

"I don’t think the president knows that it’s not enough to issue executive orders. He might be disappointed to know those things are still there," said Steve Milloy, an attorney, EPA adversary and Trump EPA transition team official. "It’s still early. But there’s a lot of work left to be done. It’s not enough to say get rid of this. You’ve actually got to do it."

Here’s a case in point: When speaking to a rally in Alabama late last month, Trump said of the Clean Power Plan, "Did you see what I did to that? Boom, gone." It wasn’t true. The rule was very much still intact, and powerful industry trade organizations, like the U.S. Chamber of Commerce and the National Association of Manufacturers (NAM), were simultaneously pushing White House officials to maintain a downsized version of that very rule (Climatewire, Oct. 5).

"The NAM supports a greenhouse gas policy going forward that is narrowly tailored and consistent with the Clean Air Act," Ross Eisenberg, NAM’s vice president of energy and resources policy, said in a statement praising news of the repeal while pushing for a replacement.

That industry groups have the White House’s ear reflects a shift in some of the administration’s broader political sensibilities.

Climate skeptics lament the loss of their brother in arms, former chief strategist Steve Bannon, and his influence on pressing Trump to go full bore on climate matters. In his place, moderate voices like Defense Secretary Jim Mattis, economic adviser Gary Cohn and Chief of Staff John Kelly have gradually tried to steer the White House away from the nationalistic tenor during Trump’s earliest days in office.

"The worrisome news for climate skeptics is that Bannon is gone," Marc Morano, a former staffer for Sen. Jim Inhofe (R-Okla.) and a prominent climate skeptic, said in an email. "It appears that Gary Cohn is trying to fill the vacuum on climate policy and that is not a good development for skeptics. Hopefully Pruitt and [Energy Secretary Rick] Perry will pick up the slack and keep the administration on the path to dismantling Obama’s climate ‘legacy.’"

At times, that’s meant some confusing messaging on a variety of climate-related aims. The Clean Power Plan is one thing. EPA also hasn’t appeared to move on a plan to challenge climate science through a "red team, blue team" debate. And on the Paris climate accord, administration officials now speak of a chance for "re-engagement," even though Trump announced in June that the United States would withdraw from the deal (Greenwire, Sept. 18).

"I wish President Trump would order officials within the administration to stop hinting that this could change," Myron Ebell, who led Trump’s EPA transition, said in an email. "I think many people in other countries are taking these hints seriously."

The endangerment finding, though, is conservative climate skeptics’ main target. The White House’s skittishness in embracing that fight is a source of consternation for many of them. Some of them served on transition teams at EPA and the Energy and Interior departments with explicit goals of setting the groundwork for that challenge.

Industry groups and establishment-leaning Republicans want to avoid a foray to undermine the finding. Success is far-fetched and a distraction, they argue, potentially painting Republicans as evermore extreme on climate. And it’s a major gamble.

Climate scientists say it would be difficult, if not impossible, to overturn the finding because its critics would need to amass scientific evidence that says exactly the opposite of what the science indicates: Humans are increasingly responsible for warming the planet. Those findings have grown since EPA issued the endangerment finding in 2009.

"Worth remembering, @EPA is *required* to regulate CO2 emissions from power plants because of the (rock solid) CO2 endangerment finding," tweeted Gavin Schmidt, a climatologist and director of the NASA Goddard Institute for Space Studies.

The vocal minority of climate skeptics contend that axing the finding is key to ensuring that deregulatory efforts remain in place. Federal courts have already rejected a number of the White House’s environmental actions, a theme that could repeat itself on climate matters.

Climate skeptics are trying to be patient, but they worry that Trump, a political newcomer, doesn’t fully appreciate the time and effort it would take to upend the endangerment finding. As an example, they point to the limited staff at EPA, which is a function of the slow pace of tendering and approving political nominees.

So skeptics are trying to advocate from the outside until there’s enough political appointees to do the heavy lifting needed for a challenge to the endangerment finding.

"What I hear from folks really in the know is they expect it to be gone," Heartland Institute President Tim Huelskamp said of whether the Trump administration plans to try to undo the endangerment finding. "At the end of the day, I’m still trying to find a serious scientist that thinks CO2 is a pollutant."