It’s go time. But will Trump ‘cancel’ or concede? 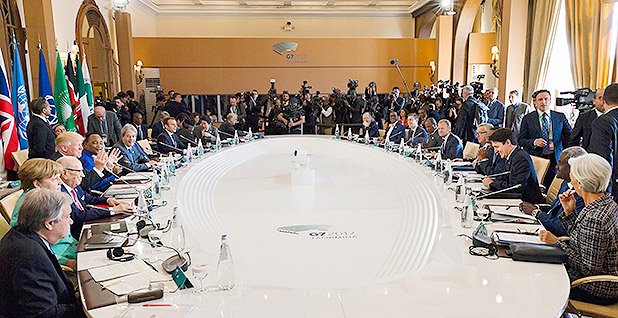 President Trump (fourth from left) spoke during a roundtable meeting of Group of Seven leaders and outreach partners at the Hotel San Domenico in Taormina, Sicily, over the weekend. Domenico Stinellis/AP Images

President Trump is finally set to announce whether the United States will remain a party to the Paris Agreement, after months of debate among top advisers and a behind-the-scenes intervention by his daughter Ivanka Trump.

The final outcome expected this week is unclear. The president’s decision, if he has come to one, is shrouded by divergent opinions in the administration. Trump has reportedly told different advisers that he’s leaning in different directions. So his verdict stands to stoke consternation in the White House and within agencies, whatever path he chooses.

"No telling," Andrew Light, a U.S. negotiator at the Paris deliberations, said of Trump’s direction. "I really don’t think you can tell from media reports now where Trump is on this or whether he is in fact telling different people different things."

Axios reported over the weekend that Trump had told "confidants" he would pull out of Paris. The news service also wrote that U.S. EPA Administrator Scott Pruitt will craft an exit plan. The agreement requires a four-year withdrawal process, though there are alternative strategies to exit more quickly. The most controversial of those involves departing the U.N. Framework Convention on Climate Change, a 1992 treaty agreed to by the Senate.

If true, Trump’s exit stance appears to be an about-face. Before he left on his nine-day foreign tour on May 19, sources say, he seemed to be leaning toward staying in the agreement.

A U.S. withdrawal promises to upset several U.S. allies, whose representatives Trump met with late last week in Brussels and at the Group of Seven summit in Taormina, Italy. While there, a number of Europeans and the prime ministers of Canada and Japan urged Trump to remain in the deal.

The summit ended with Trump standing in the way of a joint G-7 statement endorsing Paris. Six nations signed it, leaving the United States isolated. But Gary Cohn, director of the White House National Economic Council, told reporters as it was unfolding that the president’s position was "evolving" and that he is "leaning to understand the European position."

Cohn, a Democrat and a former Goldman Sachs executive, seemed to hint during a gaggle aboard Air Force One on Thursday that Trump might opt to stay in the Paris Agreement with a revised emissions pledge that he deemed more "fair" to the United States. That path is a widely discussed alternative to withdrawal.

"The Europeans, as a whole, are pretty much in favor of the Paris accord, but the Europeans as a whole have a much easier standard to abide by than the standard we were left with by the previous administration," said Cohn, adding that it creates an "unlevel playing field."

"So if we have an environmental restriction that’s unfair to us and not unfair to every other country, he’s not going to go with that," he told reporters.

Europe is developing legislation to reduce greenhouse gas emissions 40 percent below 1990 levels by 2030. The United States, under former President Obama, committed to cutting emissions 26 to 28 percent below 2005 by 2025. Trump is in the process of dismantling the environmental rules that the previous administration hoped would bring the United States close to its Paris goal.

Still, Cohn’s words seem to hint that Trump sees the Paris target as "unfair," rather than the underlying agreement itself. But Cohn might be promoting his own preferences.

Cohn is broadly viewed to support continued involvement in Paris, while Pruitt has strenuously argued against it. Both sides of the internal tug of war have projected that they expect Trump to come down on their side. It’s unclear if that’s a negotiating tactic or whether they’re reflecting what they’re told.

German Chancellor Angela Merkel said over the weekend that her days shared with Trump convinced her that the European Union must "really take our fate into our own hands."

Apparently stung by Trump’s obstruction on Paris and trade, Merkel endorsed "friendship" with the United States and others, but not reliance.

Meanwhile, new French President Emmanuel Macron, who discussed the Paris accord with Trump, bragged about refusing to concede to the polarizing U.S. president even during their handshake.

At home, the decision has divided Cabinet secretaries and White House advisers for months. Key aides and Ivanka Trump have argued in favor of preserving the agreement, to prevent blowback on an array of international issues. Others, like chief strategist Steve Bannon, say the climate pact is economically harmful. At one point last month, Ivanka Trump interceded in a legal dispute about the ability to weaken U.S. emissions goals.

U.S. climate advocates, meanwhile, are divided in their reading of the tea leaves for this week’s announcement. They tend to agree that whatever Trump proposes would likely weaken U.S. climate action.

Paul Bodnar, the former White House National Security Council climate chief, said it would be a "slap in the face" to world leaders if Trump spent days soliciting their views and then returned to Washington to announce the opposite decision.

"That would be kind of a double helping of insult," he said. Bodnar suggested it could mean either that close U.S. allies failed to persuade Trump or that he’d had his mind made up prior to the meeting.

Alden Meyer, strategy director at the Union of Concerned Scientists, said the chance of a "stay" decision is diminished now that the G-7 meeting is in the rearview mirror.

"I’d always thought if Trump was going to stay in, why not do it at the summit and take the praise and the credit of other leaders?" he said.

Whatever Trump’s decision, it comes as the European Union and China prepare for a bilateral summit this Friday that will include an agreement on climate change. It also comes as Merkel prepares for July’s meeting of the Group of 20, which she had hoped would endorse Paris. That could be complicated if Trump pulls out.

Bodnar said that a U.S. retreat from the Paris accord would create space for other countries to lead.

"What’s pretty clear, and of course encouraging, is the degree of unanimity in the rest of the world that they’re going ahead," he said.

The U.S. negotiating team under Obama helped enable this, Bodnar said, when it insisted on politically binding architecture that encourages joint action. He compared the United States to the 19th-century novella "Strange Case of Dr. Jekyll and Mr. Hyde," in which the good doctor ends up occupying the same body as the evil Hyde and starts trying to limit his damage.

"When we’re Dr. Jekyll, we’re working with the international community to create a structure that can withstand us when we turn into Mr. Hyde," he said. "The encouraging thing is that I think the structure’s going to stand."