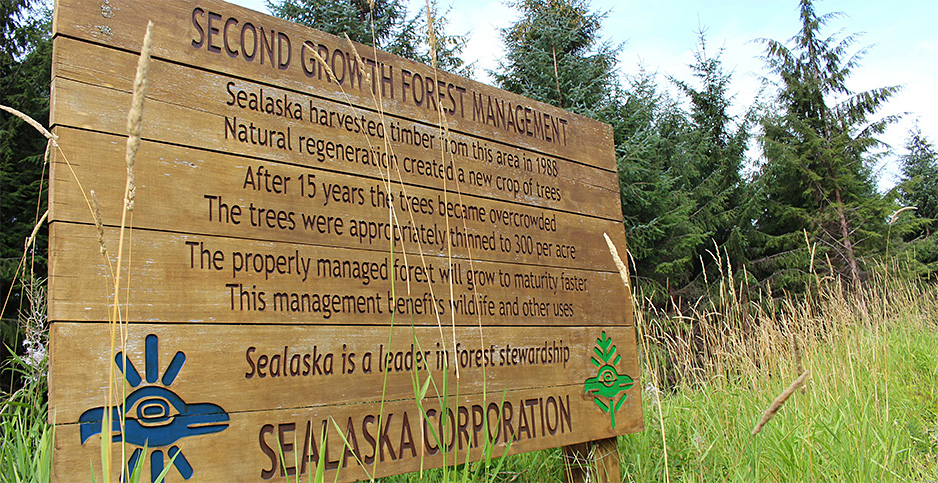 A Sealaska Corp. timber stand on Prince of Wales Island, Alaska. An Alaska Native corporation, Sealaska in the past touted its moves toward young-growth logging but now says the timber business no longer fits its long-term goals. Marc Heller/E&E News

Two years ago, Sealaska Corp. gave the Trump administration a prescription for managing the region’s millions of acres of forest. Open more areas to logging, the Alaska Native corporation urged, including places never harvested for timber.

By earlier this year, though, Sealaska — the largest private landholder in southeast Alaska and a major player in the timber industry — had taken a sharply different view of the future for its own 290,000 acres of forest: one without commercial logging.

"Several years ago, we started carefully investing in successful new businesses that are better aligned with Sealaska’s Alaska Native heritage," Sealaska CEO Anthony Mallott said in a Jan. 11 news release announcing the change, citing ocean-based foods and tourism as growth industries. "Now we are in a good position to redirect our efforts into work that’s in balance with our natural resources, and that we also believe will create significantly more value for shareholders and communities in the long term."

The timber industry in the region is still largely built around old-growth logs from the Tongass and neighboring forests — a market focused on exports to China that has been warped by trade disputes. Industry groups and conservationists alike say the industry hasn’t fully adjusted to the reality that younger-growth forests promise a much bigger potential supply of wood in the coming decades.

Sealaska’s decision sent ripples through a community that’s already seen a once-dominant industry shrink dramatically, with timber replaced by tourism, recreation and other businesses that rely on saving trees rather than cutting them. Millions of dollars in economic impact, plus related jobs in contracting and transportation, could vanish, according to business groups and industry sources.

The corporation declined multiple requests from E&E News to elaborate beyond its prepared statement. "There are disputes between parties," a source who has worked closely with the southeast timber industry told E&E News.

The Alaska Forest Association, a timber industry group in Ketchikan, also would not discuss the move. It "does not comment on the operational decisions of its member organizations and will not comment on Sealaska’s decision," Tessa Axelson, the association’s executive director, told E&E News.

But the industry has changed over the years, as smaller players vie for supply and are limited by federal regulations, Axelson said in an October podcast with Sen. Lisa Murkowski (R-Alaska). "You’re talking now about small operators doing business in a variety of locations around the Tongass," she said. "Ensuring that that industry continues is critical."

Critics of old-growth logging cheered the corporation’s decision for acknowledging that recreation, tourism and other businesses have long since eclipsed logging as the region’s growth industry, even with the Trump administration’s moves to open more areas of the Tongass to timber harvest.

"It’s really a kind of exciting moment," said Meredith Trainor, executive director of the Southeast Alaska Conservation Council. "We’ve seen an economy realigned. This move by Sealaska is consistent with that overall trend."

But Robert Venables, executive director of the Southeast Conference, a business promotion group in Juneau, said he’s heard estimates that Sealaska’s decision could strike a $30 million blow to the local economy. He blames federal policies for undercutting the industry.

"The uncertainty of supply and lack of direction and support, even for younger-growth timber, really undercuts the viability of the many families that rely, not only from the dwindling jobs on the island, but also from higher costs that are on the horizon on energy and transportation," Venables told E&E News.

Sealaska’s move will be "catastrophic for the timber industry in southeast Alaska," said Clare Doig, an Anchorage forest management consultant who works with Alaska native corporations. He said three logging contractors will likely go out of business as a result, in addition to job losses down the supply chain, including in shipping.

"The long-term prospects for the timber industry in southeast Alaska are pretty bleak," Doig said.

A ‘multi-legged’ strategy rooted in logging

As a regional Alaska Native corporation, Sealaska has always had to operate differently from other timber industry players, required by law to share much of its revenue with other ANCs. The corporation, founded in 1971 as a result of the Alaska Native Claims Settlement Act, has 22,000 shareholders and is the largest such for-profit corporation in the state. Even after acquisitions through federal land claims, Sealaska owns just a tiny fraction of the territory the Tlingit, Haida and Tsimshian people occupied for 10,000 years.

Sealaska’s timber business rested on sales of logs from tens of thousands of acres the corporation obtained from the Forest Service as part of the Alaska Native Claims Settlement Act, with the final 70,075 acres coming in 2014. "We’d secured all the land entitlement, and the strategy was trying to build diverse revenue from the land," recalled Rick Harris, a retired executive vice president for the corporation who was also acting CEO for Sealaska Timber Co.

The corporation took a "multi-legged" approach that included ecological services and carbon markets, as well as timber, leaving it to future generations to decide how the business should unfold, said Harris, who retired in 2014 believing the end wasn’t necessarily in sight for harvesting trees. "It was not to walk away," he said.

Shifting toward younger-growth logging was part of the approach. The corporation had little choice, forest industry sources say, having cut so much of the old-growth forest on its lands. But the transition reflected a sense, too, that a long-promised "wall of wood" that had grown back in areas logged decades ago could keep that part of the business going.

Sealaska was an early entrant into carbon markets, reaching a $100 million agreement with BP Alaska in 2018 to leave 165,000 acres of forest unharvested for carbon credits through California’s cap-and-trade program. The project led to Sealaska’s biggest net income year on record, the corporation said last year.

Still, Sealaska lobbied for greater timber access in the Tongass, one of the world’s last intact temperate rainforests. It urged the Trump administration to drop roadless-area restrictions on development that kept vast areas off-limits to logging, a victory the administration delivered in 2019. The corporation criticized a proposed Forest Service timber project on Prince of Wales Island for not allowing more cutting of trees. The project would cover 42,500 acres over 15 years.

"We believe that further access for sustainable timber harvests can be achieved without compromising roadless area characteristics over the majority of the Tongass," Sealaska CEO Mallott told the Forest Service in public comments on the roadless-area rule in October 2018. "We believe substantially more old growth harvest can and should be accommodated while maintaining this balance."

Trade disputes with China may have accelerated Sealaska’s exit, said Catherine Mater, a wood products engineer who has conducted inventories of timber supply in the Tongass for the Forest Service. China’s tariffs on U.S. logs, imposed in a fight with the Trump administration, cut off a key market, and the industry in southeast Alaska isn’t set up for large-scale domestic sales, she said.

Had the industry in southeast Alaska been geared toward smaller-diameter logs, Mater said, Sealaska might have been able to get by on young-growth harvesting.

"Right now, no one is set up in SE to cost-effectively process these small diameter logs into lumber and value-added product leaving Sealaska caught between a rock and hard place," Mater told E&E News in an email.

With Sealaska stepping out of the business, the Alaska Mental Health Trust — another major landowner — remains a key player in southeast timber. One medium-sized mill, owned by Viking Lumber, remains in operation near Ketchikan.

Doig, the Anchorage forest consultant, said he worries about timber revenue drying up for other Native corporations. There’s long been tension over revenue sharing, he said, and Sealaska’s exit from logging isn’t likely to help its partners. "It’s going to hurt everybody."