It’s green and new. But Biden’s deal aims for the center 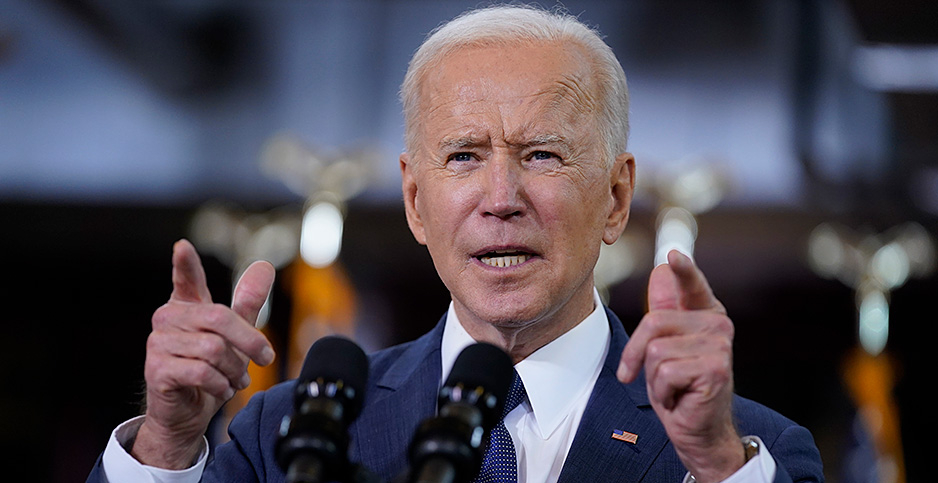 President Biden campaigned as a modern FDR. But in one of the most important moments of his presidency — unveiling his infrastructure and climate package yesterday — he swerved right of Roosevelt’s New Deal toward the political middle.

Biden cast his proposal as a continuation of President Eisenhower’s or President Kennedy’s legacies.

"It’s a once-in-a-generation investment in America, unlike anything we’ve seen or done since we built the interstate highway system and the space race decades ago," Biden said. "In fact, it’s the largest American jobs investment since World War II."

That’s more than just symbolism. Biden has scaled back his climate plans from when he was a candidate stumping in President Franklin Roosevelt’s Warm Springs, Ga., retreat. He’s proposing to spend less money, less quickly. That’s already turning off progressives, and it could put Biden’s own climate goals — already the minimum needed to avoid catastrophic warming, scientists say — further out of reach.

Mattias Lehman, digital director of the Green New Deal Network, said Biden’s plan was "disturbingly near the inadequate plan" he first proposed in the presidential primary, before expanding his climate platform in the general election to $2 trillion over four years.

Biden is now proposing to spend $2 trillion over eight years, with less than half of it dedicated to lowering emissions. All of it would be funded by raising corporate taxes.

"A plan that will leave the climate crisis hitting us hard and ruining the future lives of young people," Lehman tweeted yesterday. Progressives have countered with a bill to spend $1 trillion annually for a decade.

With bare majorities in Congress, Biden needs to win over virtually all Democratic lawmakers to advance his plan. Centrists so far have been tougher to lock down than progressives. The president and his allies also think it’s good politics to at least try to work across the aisle.

Biden’s strategy for winning over moderates in both parties was on display yesterday: He bashed China. He said the plan would shrink the national debt. He didn’t linger too long on climate. And he aimed at building GOP support — or pressure — from the bottom up.

"Ask around, if you live in a town with a Republican mayor, Republican county executive or a Republican governor," Biden said. "Ask them, how many would rather get rid of the plan. Ask them if it’d help them at all."

A risk of Biden’s approach is demobilizing the progressive activists who pushed climate onto the administration’s agenda in the first place.

Gina McCarthy, the top White House official on climate, struggled to rally activist groups behind the package in a Tuesday call, according to HuffPost.

But the political left’s problems with Biden’s package are significant.

The administration "just kinda stuck with the basic model of an infrastructure bill, a lot of which is unfriendly to the climate and unfriendly to equity — and they sort of tacked on stuff that’s good for equity and good for climate. But then they hemmed themselves in fiscally with this balanced budget thing," said Thea Riofrancos, a political science professor at Providence College who has played a leading role in the Democratic Socialists of America’s work on the Green New Deal.

"And the resulting Frankenstein doesn’t please anybody," she said. "You can’t rally the progressive troops behind it. The balanced budget people will maybe be still mad that we’re spending so much money to begin with. I mean, it’s not like you’re going to win Republicans over to this."

Other progressives see Biden’s plan as an opening bid they still can influence. And while they do want trillions of dollars more in spending, they see some upsides to Biden’s approach.

"I think it’s smart that they’re packaging this as a jobs plan, rather than as a ‘climate plan,’ only because that’s the more risk averse political approach," tweeted Julian Brave NoiseCat, vice president of policy and strategy at Data for Progress.

The early polling seems to validate the politics of Biden’s approach. Voters support the outlines of his plan by a 2-to-1 margin, according to a POLITICO/Morning Consult poll released yesterday.

Republican lawmakers almost uniformly condemned the proposal. But other corners of the political right were less antagonistic.

The American Petroleum Institute released an ambivalent statement, praising Biden’s focus on hard infrastructure and climate change but condemning his plan to eliminate the industry’s subsidies.

In the two hours after Biden’s speech, the homepages of conservative media sites — Fox News, The Daily Caller and One America News Network — had nothing on him or his $2 trillion plan. On air, Fox News anchors and guests compared Biden’s plan to socialism, but they struggled to land specific critiques.

"I’ve talked to people about their concerns. They said we’re printing money, we’re in massive debt, the government is growing at this massive rate. You know who’s worried about this? Venezuelans, Cuban Americans, they say, ‘Huh, we’ve seen this before,’" said Rachel Campos-Duffy, who anchored "Fox News Primetime" last night.

Biden’s allies say the disjointed response reflects both the merits of his plan as well as the dearth of Republican alternatives.

"The plan that President Biden laid out today — if you took the partisan label off of it, and off of him, and just read it — it just reads like a plan of our national priorities: to have a good economy, and most importantly, to beat the Chinese," Rep. Conor Lamb (D-Pa.), who helped write the Biden campaign’s climate plan, said last night on MSNBC.

"There’s nothing partisan about it," he added, mentioning how often Biden had invited GOP lawmakers to the White House. "The Republicans will have to decide whose side they’re really on. … They have to be willing to know what they’re for and not only what they’re against."