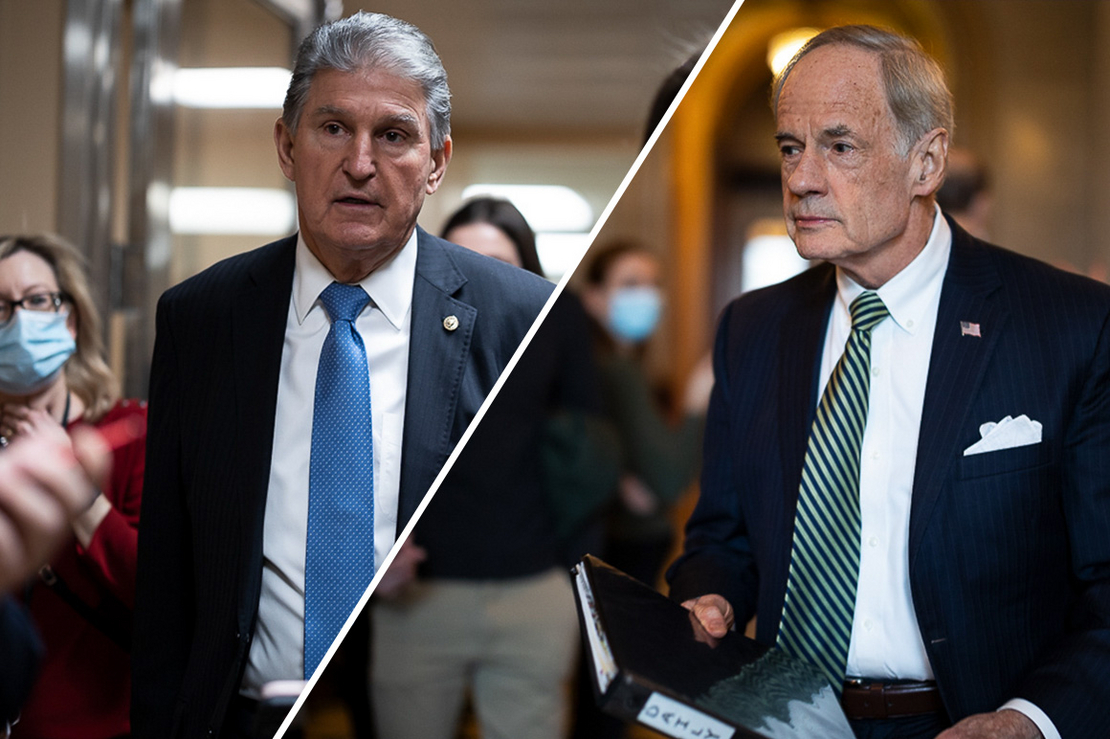 Progressives set out to write a reconciliation bill that would scrap special tax treatment for fossil fuel companies. Instead, they might hand the oil and gas industry a new subsidy.

Democrats struck a deal in October with Senate Energy and Natural Resources Chair Joe Manchin (D-W.Va.) and Texas moderates to pair a methane fee with $775 million in grants, loans and rebates for oil and gas companies to monitor and reduce methane pollution, which accounts for 20 percent of all global emissions, according to EPA.

It was a difficult pill for House progressives to swallow as they voted to advance their $1.7 trillion climate and social spending bill, and it’s still possible the methane program could drop out altogether.

With the oil and gas sector still staunchly opposed, Manchin is now negotiating additional changes to the provision with Senate Environment and Public Works Chair Tom Carper (D-Del.) as the massive package moves through the Senate.

“What’s happening here is pretty clear, and we’ve got to do something about it,” Carper told reporters this week. “And the question is, can we do something about it without doing great harm and damage to oil and gas companies who are willing to clean up their emissions?”

While moderates believe a compromise is within reach that could have a massive impact on methane emissions, the process has shown the continued influence of the industry on Capitol Hill — and the power Manchin has had to shape Democrats’ climate policy over the objections of progressives.

Democratic committee leaders never could garner serious support for tossing out the array of special tax treatments enjoyed by oil and gas companies worth tens of billions of dollars every year. At the same time, industry and moderates have thrown up roadblocks to virtually every attempt to write policy that would punitively force reductions in fossil fuel emissions, including the methane fee and the proposed Clean Electricity Performance Program, which was struck from the bill weeks ago at Manchin’s request.

“It’s grotesque to be throwing hundreds of millions of dollars at methane polluters to get them to do the right thing. I mean, that is the opposite of how I would like to approach this,” said Rep. Jared Huffman (D-Calif.).

“You just have to step back and realize that the paramount concern is reducing methane pollution,” Huffman added. “And in this political climate right now, this is the only way we can do it.”

The Methane Emissions Reduction Program, as currently structured in the House-passed reconciliation bill, would offer $775 million to the oil and gas industry beginning next year. The fee would start in 2023 at $900 per ton, rising to $1,500 per ton in 2025.

It’s not clear yet how that structure might change as it moves in the Senate, or whether the provision could get nixed due to industry’s continued opposition.

“We don’t want a subsidy, we just want the methane tax to be scrapped from the Senate bill so that we can get back to doing what we do: produce natural gas in abundant quantities that keep prices low for consumers while reducing methane emissions and overall U.S. greenhouse gases,” said Kathleen Sgamma, president of the Western Energy Alliance in Denver.

Still, supporters of the subsidy approach say the idea is to soften the blow on a diverse industry and squash the perception that the fee is an overly punitive policy.

“At the end of the day, what I want to do is, I want to get this done,” Carper said. “And I don’t want the oil and gas industry to say, ‘Oh, this is just punitive. They’re going to come after the little companies and the big companies, they’re just trying to nail us.’”

Like most compromises, however, the proposal that passed the House left few feeling fully satisfied.

While the president of Shell Oil Co., the U.S. subsidiary of Royal Dutch Shell PLC, told lawmakers in a recent committee hearing the company supported climate provisions like a “well-constructed” methane fee, other major companies have been quiet on the subject. And the industry’s small and midsize producers across the U.S. have balked, hostile to a punitive fee that they say would outweigh the benefits of the federal funding.

“We’ve been opposed to it from the get-go,” said Daniel Naatz, senior vice president of government relations for the Independent Petroleum Association of America, echoing every other significant oil and gas group in the country.

That opposition is partly because oil and gas is facing heat on multiple fronts. The reconciliation package could also include a suite of federal oil and gas reforms, including royalty rate hikes and royalties on methane that’s released into the atmosphere through venting or flaring.

But industry groups say they also oppose the methane fee because of how it’s arrived: packaged in the reconciliation deal with little debate or revision.

“There were no hearings on this legislation. The tax-writing committees didn’t look at it. There was no discussion,” Naatz said. “And so, there’s so many questions about even how this would work.”

In the face of industry lobbying, pairing the fee with $775 million in federal funding may be the best progressives can get in a 50-50 Senate, said Rep. Ro Khanna (D-Calif.), a top congressional advocate for eliminating fossil fuel subsidies.

To that end, climate hawks insist the Methane Emissions Reduction Program would achieve the goal set out in its name.

“I would have put much more of that burden on the same companies that have been ignoring this for decades,” said Sen. Martin Heinrich (D-N.M.), a top advocate for the policy. “But what is most important is what we do to the atmosphere.”

The current fight over the reconciliation bill’s methane fee is likely intertwined with something else industry is intensely focused on: EPA’s proposed methane regulations.

Manchin said this week he is seeking “good adjustments” to the methane fee to ensure companies aren’t hit with a double whammy (E&E Daily, Dec. 9).

“If they’re basically complying with the regulations, then you shouldn’t be subject to a fee,” Manchin told reporters. “So we’re talking about different things like that.”

It’s a concern that bubbled out of the industry, which views the methane fee as adding insult to injury.

“It’s double jeopardy to tax methane emissions at the same time our emissions are regulated by EPA, with yet more regulations underway,” said Sgamma of the Western Energy Alliance.

But the idea behind the fee program is that companies would not pay it if they are complying with the Biden administration’s EPA regulations, said Lauren Pagel, policy director at Earthworks.

While the program would impact a wide variety of oil and natural gas facilities, the fee would only be assessed on emissions above certain thresholds. Producers, for instance, would face a fee on methane emissions above 0.2 percent of the natural gas sent to sale or 10 metric tons of methane per million barrels of oil.

“Obviously, some of this does depend on what the final EPA rules require,” Pagel said. “But it is highly likely that facilities that meet the new EPA standard will emit below the threshold and pay nothing.”

Carper, for his part, said yesterday he’s been talking consistently with Manchin, as well as “folks within the oil and gas industry.”

“I’m encouraged,” Carper said. “I think there’s a principled compromise that’s there for the taking — if we’ll take it.”

Sticky situation for some Dems

Whatever happens to the methane fee in the coming days, the political fight could reverberate.

Even with full Democratic governance and before a midterm cycle where the party is likely to lose congressional seats, climate policies like the methane fee remain a difficult sell for progressives.

“It’s absolutely sickening that this industry is going to get paid to reduce its pollution instead of just doing the right thing like every other industry does,” Huffman said. “But that’s where we are.”

In the oil patch, meanwhile, industry sources believe the issue will continue to resonate, and come election season, the methane fee could be front and center in ads from challengers. Texas Democrats who had concerns ultimately voted for the full package last month, even as they tried to have the methane fee changed or removed.

Six of those lawmakers signed a September letter to House leadership warning that anti-oil and gas policies included in reconciliation could “cost thousands of jobs, stifle economic recovery [and] increase energy costs for all Americans.”

Sticky politics aside, advocates of the policy point out that there’s a climate imperative to slash methane emissions immediately.

“We’re in a climate crisis, and we need to be reducing methane emissions,” Pagel said. “The science is clear that methane is one of the quickest ways that we can reduce emissions while we’re on this path to a clean energy future.”

Sen. Sheldon Whitehouse (D-R.I.), a top congressional climate hawk, said the point of the climate provisions of the bill — some $550 billion worth in total — is to reduce emissions from fossil fuels to a level that science says would limit global temperature rises.