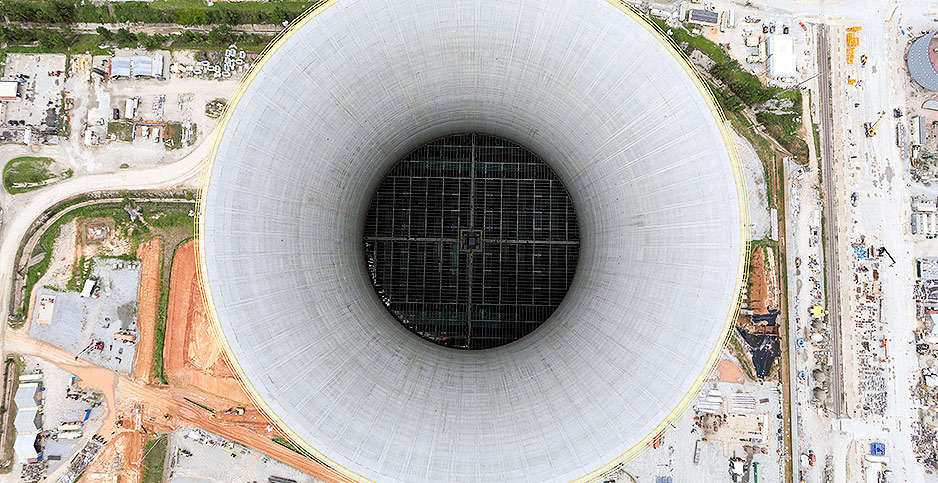 August will be a pivotal month for the U.S. nuclear industry. Georgia Power Co.

It is a pivotal time for the nation’s nuclear industry.

Utilities in Georgia and South Carolina are preparing to publicly say whether they will finish their reactor projects and how much that will cost. Their decisions could determine whether another baseload nuclear power plant gets built in the United States.

For South Carolina, that announcement could come as early as today. State-owned Santee Cooper has called for a special board meeting at 10 a.m.

Santee Cooper owns 45 percent of Scana Corp.’s V.C. Summer project. Analysts have already signaled that if Santee Cooper decides it can no longer remain a partner in the project that another one would be needed to help Scana’s South Carolina Electric & Gas Co.

Southern Co.’s Plant Vogtle and Scana Corp.’s V.C. Summer project were hailed as a restart to the nation’s dormant nuclear power sector. Any successes at the highly complex, multibillion-dollar reactors have been shrouded in other problems, however.

The reactors have become a prime example of why making baseload nuclear reactors is so difficult: They are expensive and complicated to build.

"Finishing the Vogtle and Summer projects have become a matter of national security and something that is bigger than our two states," said Georgia Public Service Commission Vice Chairman Tim Echols.

"That means the president and Congress may need to intervene in some way to ensure these projects are not abandoned if they prove to be too expensive for our respective states," Echols said.

August is a key month for many reasons, beginning with Santee Cooper’s board meeting. SCE&G has been scheduled to update South Carolina utility regulators tomorrow, and Georgia Power said it publicly will reveal a new cost-and-schedule update by the end of the month.

The public power companies that are partners in Vogtle also have scheduled board meetings.

SCE&G and South Carolina-owned Santee Cooper have already warned that a $2.2 billion payout from Westinghouse-owned Toshiba Corp. may not be enough to support their reactor expansion project at V.C. Summer.

"News this morning was incrementally more negative than we anticipated, and the risk of nuclear construction abandonment has materially increased," a Friday Guggenheim research note said.

"At this point, it is becoming more evident to us that the situation around V.C. Summer is materially deteriorated, and a situation that is constructive for shareholders is becoming less evident," the note said.

Even without news out of South Carolina, Georgia utility regulators already have made it clear that many stakeholders will decide Vogtle’s future and that Georgia Power’s word is not final.

"The cost will be more important now than ever before, not just to the company but to their partners," said Georgia PSC Chairman Stan Wise, referring to Oglethorpe Power, the Municipal Electric Authority of Georgia (MEAG) and the city of Dalton, which collectively are majority owners.

"Ultimately, [Georgia Power] is not the ultimate arbiter and decider on this issue. It becomes the commission’s decision," he said.

Westinghouse filed for Chapter 11 bankruptcy protection in late March. Its decision triggered Georgia Power and SCE&G to circle the wagons with the public power companies and set up temporary working arrangements with Westinghouse to keep the reactors going forward.

The electric companies gave public updates to utility regulators and then shifted to a bunker mentality. Westinghouse did the same. Bankruptcy filings, regulatory documents and emailed statements became guides and sources of information.

That paved the way for consumer advocates and anti-nuclear activists to line up their "we told you so" statements. Doing "back of the envelope" math, groups issued statements saying the projects would cost billions more.

They called for utility regulators to do a complete review of the projects as well as cancel them.

They question how transparent Georgia Power and SCE&G will be with future information and argue that it is needed so the economics of the projects can be fully vetted.

"I’m concerned that the numbers we’re going to get, if they are publicly available, aren’t going to be real," said Sara Barczak with the Southern Alliance for Clean Energy. "Shouldn’t the full cost of the project be a part of this discussion because you need the other owners to be involved?"

Georgia Power and SCE&G have been digging through Westinghouse’s data to do their own analysis on how much it will cost to finish one or both reactors as well as abandon their projects. SCE&G also said it is considering converting one or both units to natural gas because there is enough future demand on the grid.

A number of factors will play into the utilities’ decisions. Some have happened already. The remaining unknowns only fuel speculation and angst, many have said.

"I think that the companies are getting close to making their decision, and we’re anxiously waiting to see what that decision is, so we can start our review of that decision. We’ve been very limited so far in what we can do," said Dukes Scott, executive director of the South Carolina Office of Regulatory Staff.

A chief hurdle for both projects was obtaining billions in parent guarantees from Toshiba. The Japan-based conglomerate has agreed to underwrite Vogtle with $3.7 billion and V.C. Summer with $2.2. billion. Toshiba has agreed to pay this money regardless of whether the utilities decide to finish the reactors.

The payments will start in October and run for a number of years. But Toshiba’s own financial troubles, triggered by losses from the U.S. nuclear projects, have led some to worry about whether the company will be able to make good on its promise.

A separate step is securing new contractors. For Vogtle, that is Southern’s nuclear unit and Georgia Power.

The new working arrangement with Westinghouse has cleared all hurdles, including that of the Department of Energy. The new agreement shifts a significant part of the risk to Georgia Power, which concerns consumer advocates and some regulators.

The DOE approved the agreement but set new terms on the federal loan guarantees that Vogtle receives, according to a filing made by Georgia Power last Friday.

SCE&G and Santee Cooper continue to negotiate with Westinghouse.

Separately, Bechtel is submitting a bid to expand its presence at Vogtle, and it’s unclear whether Fluor Corp. is doing the same at V.C. Summer.

At the same time, the owners of both projects also are pushing for Congress to extend a key nuclear production tax credit past Dec. 31, 2020, so Vogtle and Summer can receive it. Key to the legislation is that it would make it possible for public power companies to take part.

The House passed a measure already. Senators from South Carolina have said they’re working to find a legislative vehicle for the tax credit extension, but have not announced more specifically how they plan to pass it, and none of the bills that are in the mix look likely to pass before the August recess.

Perhaps most important, however, is complete buy-in from the public power companies.

"The bottom line is, there’s a reason these projects have partners, and if the partners have issues, you have to listen to what they have to say," said Paul Patterson, a utility analyst with Glenrock Associates Inc.

Answers are coming. It’s unclear when.

SCE&G is scheduled to present an update to the South Carolina Public Service Commission tomorrow. Southern, Scana and subcontractor Fluor are scheduled to discuss their quarterly earnings with analysts later in the week.

MEAG and Oglethorpe have board meetings scheduled for August but could announce special meetings before or after those dates.

Georgia Power’s share of Vogtle is 45.7 percent. It has hired outside consultants on behalf of the other owners, MEAG spokesman Paul Warfel said in an email to E&E News.

MEAG and Oglethorpe are working closely with Georgia Power, as expected.

"We believe that any decision to complete the project must be based on a high-confidence estimate for finishing the two generating units and placing them into operation," said Greg Jones, a spokesman for Oglethorpe Power, in a statement.

There are also deadlines. Toshiba must file audited earnings by Aug. 10, and failure to do so puts the company further at risk of being delisted from the Tokyo Stock Exchange.

Scana’s temporary working arrangement with Westinghouse also expires that day, and even with last week’s news, it’s unclear what the utility will do next.

"We are working to complete the schedule and cost-to-complete assessment as quickly as possible," Georgia Power spokesman Jacob Hawkins said in a statement.