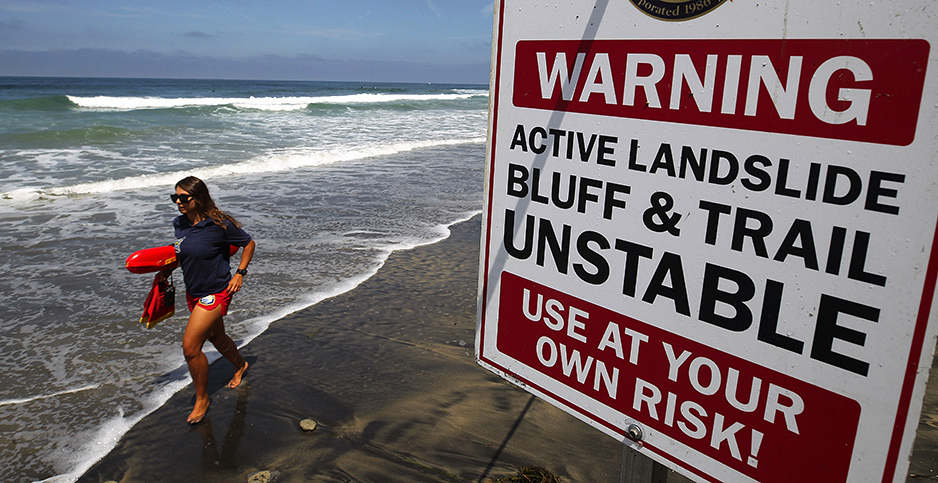 A lifeguard runs past a sign warning beachgoers of dangerous cliffs in Encinitas, Calif. Three people were killed when a cliff collapsed in August. Hayne Palmour IV/TNS/Newscom

Now a state ruling means they’ll have to put the house farther away from the water, where they won’t see the shore. It’s a result of climate change and California’s response to it.

"When you’re sitting on that porch and you look directly to the right and directly to the left, all you see are towering structures," Lindstrom said, describing a home set 60 feet back. "You wouldn’t see the ocean sitting in a chair on your back porch."

The case marks a pivotal point in an escalating battle over building on California’s coast in the era of climate change. After a long legal fight, the California 4th District Court of Appeal sided with the commission on the 60-foot mandate. The September decision also upheld that the couple must waive the right to a future sea wall and remove threatened parts of the home if the bluff erodes to within 10 feet of the house.

"This is an issue that’s going to be faced time and time again, especially in the southern areas of the state where a lot of the development is right up to the edge of those bluffs," said Molly Melius, manager of the Environmental and Natural Resources Law and Policy Program at Stanford Law School.

Higher waters put California’s iconic beaches in peril. The California Fourth Climate Change Assessment predicted in 2018 that one-third to two-thirds of California’s beaches will disappear by 2100 "without large-scale human interventions."

The Coastal Commission requires homes to be built so they’re secure for 75 years without relying on sea walls, which can hasten the disappearance of beaches by preventing them from moving landward as seas rise. There was a flurry of wall building in the 1970s and ’80s.

It’s part of the commission’s duty "to ensure that new development minimizes risks to life and property in areas of high geologic hazard," she added. "California’s blufftop, ocean-fronting lots are generally areas of increased geological instability, and this is especially true in the era of sea level rise."

However, Schwartz said, determining setbacks for developments is done "on a case by case basis … there is no one size fits all approach."

In the Martin case, which is still in court, the commission’s requirement would leave enough room on the property for a 1,000-square-foot house, according to Paul Beard, the Martins’ lawyer. The couple want to build a 3,110-square-foot house plus a basement and garage.

At the 2016 Coastal Commission hearing on the Lindstrom case, some commissioners questioned whether the agency was changing its policy on setbacks. Then-Commissioner Martha McClure said the commission’s requirements needed to be clear so homebuilders wouldn’t be surprised.

"We have to have a policy that’s been adopted and planned," McClure said.

Commission Executive Director Jack Ainsworth said at the hearing, "that’s what we’re trying to do in this case is set up that process."

In the Lindstrom case, the city required putting the house 40 feet back. Then the commission added another 20 feet. The commission’s analyses, which look at sea-level rise and accelerated erosion, differ in every case, Ainsworth said.

"It’s not evolution of policy. It’s evolution of the analysis, and different factors and assumptions that go into the formula," Ainsworth said. That’s needed with "the uncertainty of sea-level rise."

The Lindstroms opted against appealing to the California Supreme Court because of the added legal fees. They own the house on one side of their open lot. Now they’re debating whether to sell the nearly 6,800-square foot empty parcel, which they bought in 2012.

The question of where it’s safe to build with sea-level rise is popping up in other California coastal areas, said David Revell of Revell Coastal, which has analyzed the flood risk of nearly 20 cities and counties.

For years, cliff-top setbacks were determined by looking at historical erosion rates. That’s no longer adequate, Revell said. He advises planners to look at how sea-level rise accelerates erosion, then add a potential bluff failure, such as a 10-foot section of cliff dropping to the shore.

The California coast tends to collapse in chunks, followed by several years without much erosion, explained Gary Griggs, a coastal expert at the University of California, Santa Cruz. That’s why citing average erosion over several decades doesn’t offer the full picture, he said.

"There’s definitely a feeling, because we’ve seen a lot of landslides and erosion along our bluffs, that it’s in nobody’s interest to have a lot of stuff on the bluff," Hetrick said. "It eventually ends up on the beach below."