It’s Manchin’s climate bill now. Here’s what might be in it 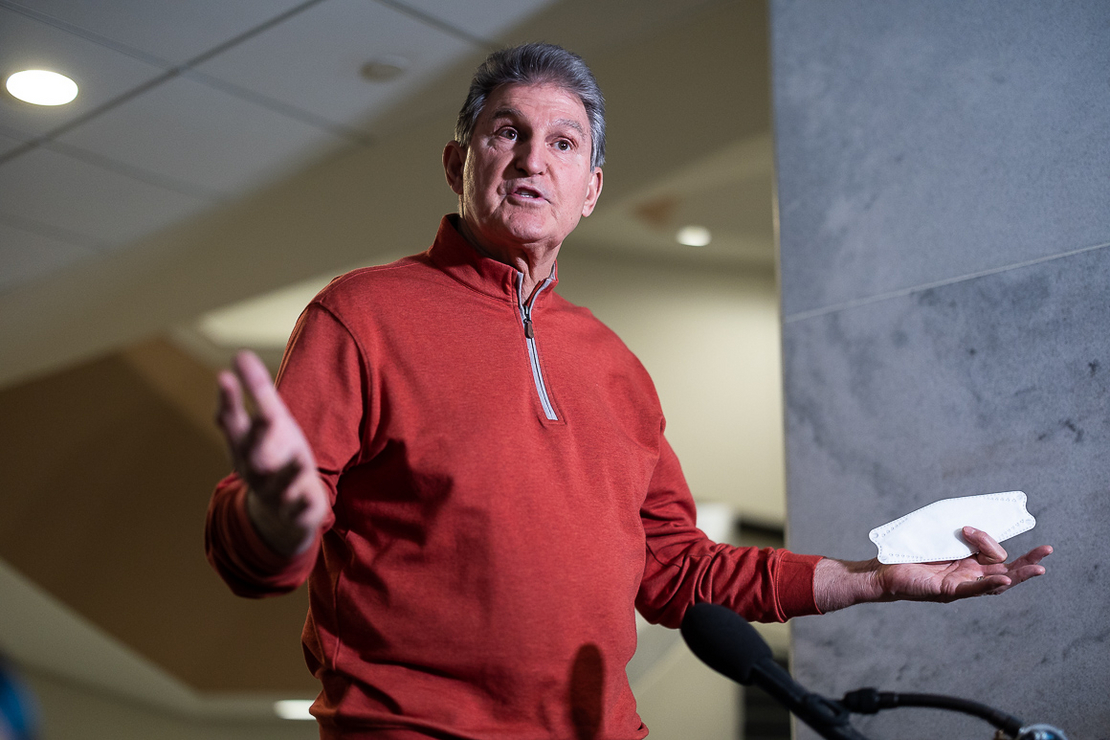 When President Biden acknowledged for the first time Wednesday that he would break up his signature $1.7 trillion spending plan, it was a recognition that he had to cede the field to Sen. Joe Manchin (D-W.Va.).

For months, Biden and most Democrats on the Hill have prodded, pressured and pushed Manchin to sign on to the "Build Back Better" package, to no avail. Manchin drove a stake through the heart of that plan on Fox News in December when he rejected the legislation.

But it’s a new year and a new last-ditch chance for Democrats to get something passed that they can offer to voters in the upcoming midterm elections, which are expected to be brutal for the party. Biden’s public acknowledgment this week that he could still win smaller, albeit piecemeal, legislative victories was a sign that the White House is finally going to rally around whatever Manchin will support.

Manchin said earlier this month that it would be easier to pass the $500 billion in climate provisions tucked into the "Build Back Better" plan as a stand-alone bill, and Biden said Wednesday that he is now prepared to do that.

Biden recognizes that his only choice is to get as much policy done through the budget reconciliation process as possible, since that doesn’t require any Republican votes, White House press secretary Jen Psaki said yesterday.

“He also recognizes that nothing is going to get done without 50 votes, so we’re not confronting a choice between what can happen and our ideal," she said. "It’s a choice between do we make critical progress for the economic well-being of middle-class families and in tackling the climate crisis, or not.”

What Manchin wants now is anybody’s guess. He made it clear to reporters yesterday that he expects to start with a clean slate and that previous offers are no longer on the table. He said he wants to deal with inflation, the national debt and Covid.

"We will just be starting from scratch," Manchin told CNN, adding that it will be a "clean sheet of paper."

Sen. Tina Smith (D-Minn.), who crafted key climate provisions in "Build Back Better," sounded optimistic yesterday about the road ahead, noting that she and other lawmakers have worked for months with Manchin on climate programs.

She expects that negotiations won’t have to start from scratch because “just a couple of weeks ago, there was agreement."

Manchin has never publicly said what he wants in a climate bill, but his comments over the last few months provide some clues. He seems to support clean energy tax credits that don’t discriminate against coal and gas but do fund carbon capture, counting hydrogen-powered vehicles in electric vehicle incentives, and electric grid reliability measures.

Manchin’s legislative record provides other points of insight. In 2020, he worked closely with Sen. Lisa Murkowski (R-Alaska), then the chair of the Energy and Natural Resources Committee, on legislation that authorized federal research and development for long-duration energy storage, advanced nuclear reactors, and carbon capture and sequestration (Energywire, Dec. 23, 2020).

The bipartisan infrastructure package enacted last year provided funding for much of that research, including $10 billion for carbon capture and $2.5 billion for advanced nuclear. Manchin has also been an outspoken supporter of clean hydrogen, which received $8 billion for hydrogen fuel hubs under the infrastructure bill.

"Build Back Better" would have increased funding for those technologies. Nuclear was in line to receive nearly $23 billion in production tax credits, according to the Joint Committee on Taxation. Hydrogen was pegged to get $9 billion. And CCS was to receive about $2 billion.

The stalled bill also included about $12 billion in advanced manufacturing subsidies, which included bonuses for facilities built in former coal communities. The idea builds on a proposal advanced by Manchin in previous years (Climatewire, Nov. 29, 2021).

"Build Back Better" would have ramped up those subsidies by $100 billion over 10 years and reformed the credits to provide direct payments to wind and solar producers (Climatewire, Nov. 16, 2021).

“I think there is a lot of good stuff in this bill for everything from fossil fuel workers to the clean energy economy,” said Leah Stokes, a professor at the University of California, Santa Barbara, who has championed the legislation. “I think it will work for West Virginia as well as every other state.”

It is unclear whether Manchin would support those provisions in a stand-alone climate bill envisioned by Biden. His office did not respond to a request for comment.

In a letter last year to Senate Majority Leader Chuck Schumer of New York, Manchin wrote, “If tax credits for solar and wind are included and extended, then fossil tax credits are not repealed (eg. intangible drilling costs and credits for enhanced oil recovery.)”

His position echoes the concerns raised by Toyota Motor Corp., which operates a manufacturing facility in West Virginia.

"We shouldn’t use everyone’s tax dollars to pick winners and losers,” Manchin told Automotive News during a November event at the facility. “If you’re a capitalist economy that we are in society then you let the product speak for itself, and hopefully, we’ll get that, that’ll be corrected."