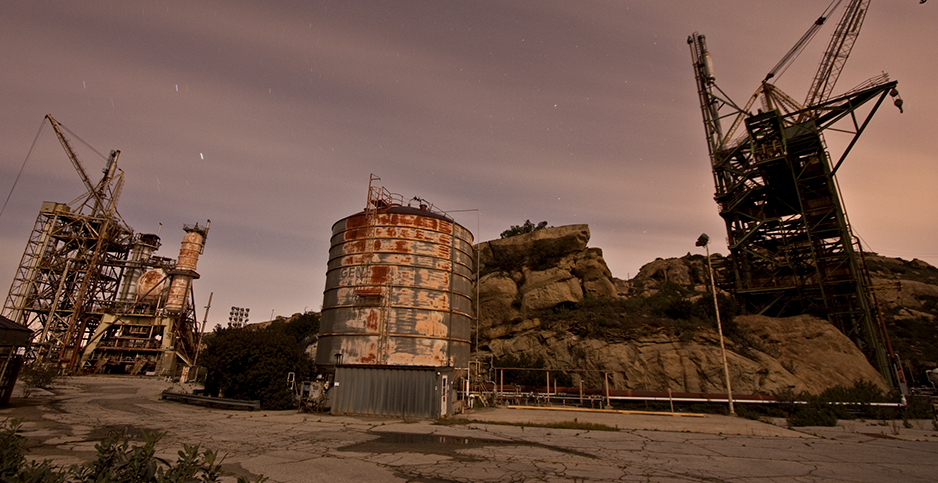 After dramatically scaling back the cleanup plan for one of the country’s most contaminated areas, critics say, the Trump administration is now preparing to sidestep any remediation at all by declaring the entire near-3,000-acre former rocket and nuclear testing site near Los Angeles a culturally significant site for Native Americans.

The Santa Susana Field Laboratory, the site of a partial nuclear meltdown in 1959, contains a cave featuring Native American pictographs that has been listed on the National Register of Historic Places since 1976.

Under the terms of a 2010 cleanup agreement with California, there is an exception to cleaning up Native American "artifacts."

NASA is one small step from pushing the entire cleanup through that loophole, said Daniel Hirsch, a retired director of the Program on Environmental and Nuclear Policy at the University of California, Santa Cruz.

"In the guise of protecting Native American sites, they are trying to get out of having to restore the damaged site so it would be safe for Native Americans to go to it," said Hirsch, who is now the president of the Committee to Bridge the Gap, which advocates for cleaning up the site.

NASA spokeswoman Shannon Segovia pushed back on the allegation. She said listing the entire field lab as "traditional cultural property" on the National Register of Historic Places "will not affect NASA’s cleanup responsibilities."

But Hirsch and activists for the cleanup — including the Kardashians — said they have a good reason to be skeptical of NASA’s intent: history.

"This cynical scam has nothing to do with preserving cultural heritage but everything to do with weaseling out of expensive cleanup responsibilities," said Jeff Ruch, the Pacific director of Public Employees for Environmental Responsibility.

"NASA’s plan is a sick perversion of the historic protection process," he said.

Cleanup efforts at the Santa Susana Field Lab have a tortured past.

The lab was built in the late 1940s in what was at that time a remote area on the Los Angeles-Ventura County line where few people lived.

Its work was always dangerous.

Rocket testing began right away, and by the 1950s it was also conducting nuclear experiments. It was eventually home to 10 nuclear reactors, four of which suffered accidents, including a partial meltdown in 1959 that released more radioactivity than the Three Mile Island catastrophe.

The experiments led to major soil and groundwater contamination. By some estimates, the more than 20,000 rocket tests led to a million gallons of trichloroethylene entering the environment, as well as large amounts of perchlorate, a component of rocket fuel.

Both are carcinogens, and studies have documented widespread other contamination as well from other volatile organic compounds.

Now that pollution has seeped into soils and has migrated through groundwater.

The Boeing Co. now owns most of the site, with NASA holding on to a small share.

In 2010, NASA and the Energy Department signed administrative orders of consent with California, a legally binding agreement to remediate the site.

That cleanup was supposed to be done by 2017. It hasn’t started yet.

In 2018, the Woolsey Fire started at the site before winds drove it to the Pacific Ocean. The fire killed three people, and winds fueled its march toward the Pacific Ocean, eventually burning nearly 97,000 acres, including celebrity real estate.

The Kardashians joined the cause after the fire, appearing at community events and hosting experts on their reality show in December 2019.

Kim Kardashian West repeatedly took to Twitter, where she has more than 65 million followers, to call on President Trump and California Gov. Gavin Newsom (D) to clean up the site (Energywire, Feb. 28, 2019).

The @CaliforniaDTSC @Energy @NASA promised to cleanup contaminated Santa Susana Field Lab by 2017, but the job hasn’t even begun! Time to #ReformDTSC & for Feds to #KeepSSFLPromises @GavinNewsom @JaredBlumfeld @secretaryperry @realdonaldtrump this one we can all agree on!

This May, the Trump administration and California announced a $24 million agreement to tear down 10 buildings that include some of the most contaminated (Energywire, May 21).

But that agreement addressed only part of the site, not the larger cleanup envisioned in the 2010 agreement. And Hirsch and others say NASA has been quietly working on two tracks to undermine it.

First, near the end of 2019, NASA unexpectedly undertook a new environmental assessment of the cleanup effort. The supplemental environmental impact statement, finalized in July, significantly reduced the acreage that would be remediated.

The new preferred alternative narrows the number of acres to be cleaned by 84%, according to an analysis by Hirsch and the Physicians for Social Responsibility.

It would also significantly reduce the cost of the cleanup. Instead of putting the government on the hook for more than $490 million, the new plan would cost $135.6 million.

NASA casts the new plan as a "suburban residential cleanup," saying it will remove "about 90% as much soil" as required in the 2010 agreement "while requiring 70% less soil to be excavated and transported offsite."

NASA "is eager to move ahead and will finalize a soil cleanup implementation plan" as soon as California signs off on the new environmental impact statement.

Regulatory authority over the cleanup technically falls to California’s Department of Toxic Substances Control, or DTSC. And that agency has been critical of the new EIS, though advocates including Hirsch are skeptical that the state will ultimately stand up to NASA.

"NASA has willfully identified a soil remedial alternative that would violate NASA’s legal obligations to clean up its contamination" at the field lab, the agency said in a Sept. 28 letter. "DTSC will hold NASA accountable for complying with its legal obligations."

The second tactic NASA has employed is the National Register of Historic Places.

And there, Hirsch said, it gets even more bizarre.

In the center of the field lab is a relatively small cave that has cave paintings very valuable to the Santa Ynez Band of Chumash Indians, including pictographs estimated to be several hundred years old.

Consequently, the Burro Flats Painted Cave was listed on the register for protection in 1976, carving out about 25 acres in the site.

This summer, after reevaluation by NASA and others, the boundaries of the designation were reduced by nearly half.

Now NASA is asking the Interior Department, which manages the register, to expand those boundaries — to the exact size of the entire field lab, 2,850 acres.

The request came in a little-noticed line in the Federal Register, and critics say NASA has provided virtually no justification for the expansion.

In its application, NASA contends that the use of the lab "resulted in keeping the area in a state similar" to when Native American tribes "used and occupied the area."

"This is completely false," Ruch, of PEER, wrote in the group’s comments to Interior. "Native Americans did not operate reactors at the site, nor did they test tens of thousands of rockets there."

The advocates claim NASA is angling for a carve-out in the 2010 agreement. It contained a cleanup exception for Native American "artifacts," such as the painted cave.

NASA denies the strategy, but Hirsch and Ruch point to language in a 2017 Senate Appropriations Committee report on funding for the cleanup.

California has sent mixed signals on the front, to speculation that the state is also backing away from the agreement.

The Ventura County board of supervisors voted in July to oppose the new designation, but nevertheless, the California Office of Historic Preservation approved the nomination.

"We suspect that DTSC would be delighted to have [the site] removed from its large backlog of un-remediated sites," Ruch said.

To Hirsch, the idea of using the register to preserve the field lab makes his head spin.

"It’s really something," he said. "There is almost no place in the country that is more damaged. … If we are talking about trying to preserve an area important to Native Americans, you clean it up."