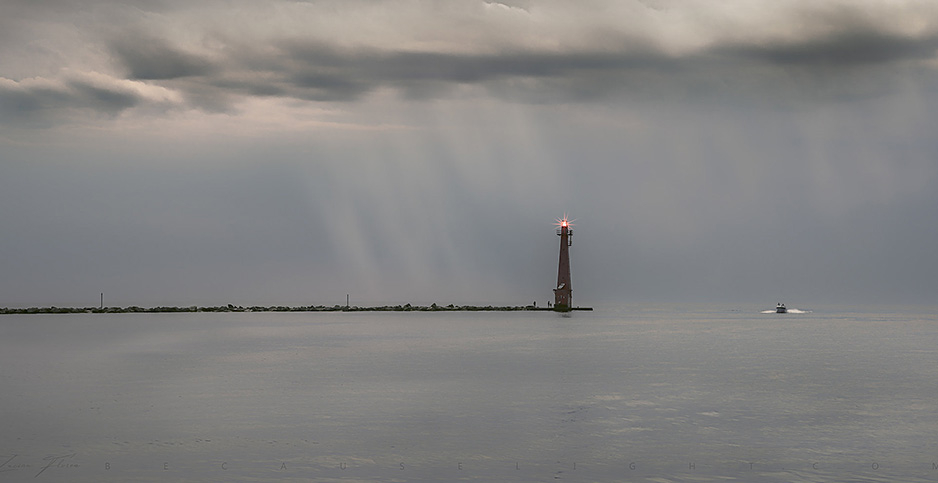 Researchers have long detected chemicals — from legacy pesticides to PCBs — in rainwater falling across the Midwest.

Then came the "forever chemicals."

"It’s everywhere," said Marta Venier, an environmental chemist at the University of Indiana’s School of Public and Environmental Affairs. "Once these chemicals get into the air, they can travel long distances from specific sources, so you find some levels of these everywhere."

Venier and other researchers sampling rainwater across the Great Lakes say their raw data shows levels of per- and polyfluoroalkyl substances (PFAS) across the Midwest, from Chicago, northeast to the Sleeping Bear Dunes National Lakeshore and south to Cleveland.

Their findings add to a contentious discussion around how regulators should address PFAS — a family of thousands of chemicals prized for their water-resistant properties but scrutinized for potential stark health impacts. Two PFAS — PFOA and PFOS — have already been phased out of production in the United States over cancer concerns and other risks. But other PFAS, including replacement chemicals for PFOA and PFOS, are abundant in manufacturing and increasingly found throughout the environment.

The new rain research is part of work done by the Great Lakes Integrated Atmospheric Deposition Network (IADN) that involves analyzing 38 different compounds in ambient air and water. PFAS were integrated into the long-term monitoring program beginning last summer, Venier said. EPA established IADN in 1990 as part of a binational partnership with Canada to monitor the atmospheric contribution of chemicals to the Great Lakes.

The raw rain data is still preliminary, undergoing a peer review, and likely to be finalized in August. It is not publicly available at present for that reason, although the data showed measurements with an average total concentration of between about 100 to 400 parts per trillion PFAS, according to Venier.

But one sample taken in April in Cleveland was different: 1,000 parts per trillion. For comparison purposes, that amount is significantly higher than EPA’s current drinking water health advisory for PFOA and PFOS, which is set at 70 parts per trillion.

A ‘pathway’ for chemicals

Venier said the findings are tied to the nation’s everyday use of the chemicals in consumer products, from Gor-Tex and cellphones to nonstick pans and other water-repellent goods.

"Every time we use them, some of it gets into the air, into the dust and into the environment. Atmospheric transport and deposition, which is rain, is one of the major ways of transport for these chemicals in the environment," she said.

Venier said the research shows that, in addition to point sources of PFAS, there’s a widespread presence of the chemicals in the environment.

Researchers want to continue collecting samples every month and analyze the long-term trends to see if there are seasonal changes, as well as the geographic distribution of PFAS in rain among the sites, she said.

Todd Nettesheim, deputy director of EPA’s Great Lakes National Programs Office, told reporters taking part in a Great Lakes workshop through the Institute for Journalism & Natural Resources that the purpose of the network surrounding the long-term IADN monitoring program is to look at chemicals in the atmosphere.

"The atmosphere is a primary pathway for many chemicals to get into the Great Lakes, and the reason is because the surface area for the Great Lakes … they’re some of the largest lakes in the world," he said.

Nettesheim confirmed that researchers have been looking for legacy chemicals, PAHs, a class of chemicals that occur naturally in coal, crude oil and gasoline, and more recently, flame retardants.

Last summer, he said researchers began using the program to start a pilot project to look for PFAS in rainwater because most of the chemicals reside in water as opposed to in sediments or as vapor particles in the atmosphere. Nettesheim said he hasn’t had a chance to dig into the data yet.

"But again, the purpose of that data," he said, "is to really give us a better understanding of what’s out there in the environment, how it might impact the Great Lakes and to better understand the situation."

Nettesheim emphasized that sampling for PFAS in the environment is difficult and that it requires different collection and analytical methods.

"It’s just a very complex chemical to try and measure in the environment," he said. "We want to better understand how it cycles through the Great Lakes system and whether or not the atmosphere is an important pathway into the Great Lakes."

The Great Lakes aren’t the only area seeing PFAS in rainwater. North Carolina in 2018 detected GenX, a PFAS compound, in rainwater samples collected near the Chemours Co. plant in Fayetteville.

That facility has been linked to significant contamination in the Cape Fear River and is a party to an agreement with the state involving cleanup and water supply for residents. That consent decree was reached under current EPA Administrator Michael Regan, who previously led North Carolina’s environmental department.

GenX is a short-chain PFAS, meaning that it has fewer carbons than long-chain compounds like PFOA and PFOS. Industry has increasingly moved toward short-chain compounds amid concern about health impacts stemming from longer counterparts. Manufacturers point to data showing some short-chain PFAS exit humans more quickly, making them less likely to bioaccumulate and cause health issues.

But research on most individual PFAS is limited. Some initial findings from EPA indicate similar effects from GenX to those from PFOA, the compound it replaced.

Alexis Temkin, a toxicologist with the Environmental Working Group, underscored concerns around short-chain compounds, including both potential health risks and their tendency to linger in the environment. She said that while those PFAS may be winding up in rainwater in part because they are now more commonly used in manufacturing, other factors are also a possibility.

"There might be a component with the short-chain PFAS potentially being more water-soluble," she said. "And they can migrate more just because they are shorter."

IADN’s data shows multiple short-chain PFAS in rainwater, including fluorotelomer carboxylic acids, which are common in products like food packaging. A different rainwater study, presented this spring at an American Chemical Society meeting, also showed detections of various PFAS, including GenX, which researchers found at every site they scrutinized. They noted long- and short-chain PFAS to both be very present in the overall data.

Temkin said PFAS-laden rainwater is mostly an issue due to its potential for contaminating drinking water. It could also affect fish and other animals, heightening exposure possibilities when they are consumed as food.

‘We need a national solution’

PFAS are a major source of tension, with industry groups maintaining that their products are safe and advocacy organizations arguing that the chemicals have become prevalent in the environment, including newer short-chain compounds.

EPA has been more aggressive on long-chain compounds — namely, PFOA and PFOS — but the agency has given limited indications around how it may approach other PFAS.

Regan’s familiarity with PFAS contamination has given environmental groups and affected communities hope that the agency will finally engage in aggressive action to address the scope of the problem. But many say the agency has taken far too long to crack down.

"PFAS are really everywhere," said Temkin, whose organization supports regulating PFAS as a class. "Federal regulation is one of the best ways that we’re going to tackle this issue."

Rather than wait for EPA, multiple states have moved to regulate certain PFAS in water, establishing maximum contaminant levels and setting various parameters through regulation and legislation. Others have not, with some state officials saying they are holding out for EPA to establish regulations they can adhere to (E&E Daily, June 10).

When asked whether EPA is working with states on PFAS, Nettesheim said the agency’s Great Lakes National Program Office is a nonregulatory, nonenforcement office with the primary goal of protecting and restoring the Great Lakes, as well as programs like the Great Lakes Restoration Initiativeand Great Lakes Water Quality Agreement.

"We would not have a role in working with the states on the regulatory matters," he said.

Asked about IADN’s recent findings, an EPA spokesperson confirmed that PFAS were added to the program’s sampling operations in summer of last year. The agency did not elaborate on whether the research is something its newly established PFAS Council might look into or if the presence of short-chain compounds in rainwater is raising alarm (Greenwire, April 27).

But for regulation proponents, the rainwater findings underscore the need to act quickly.

"The first thing that I think about when I see data like this is that it really cements how the more you look for PFAS, the more you’re going to find it," said Temkin. "The story in isolation is really interesting, but we need a national solution. That’s something that really needs to be done at the federal level."