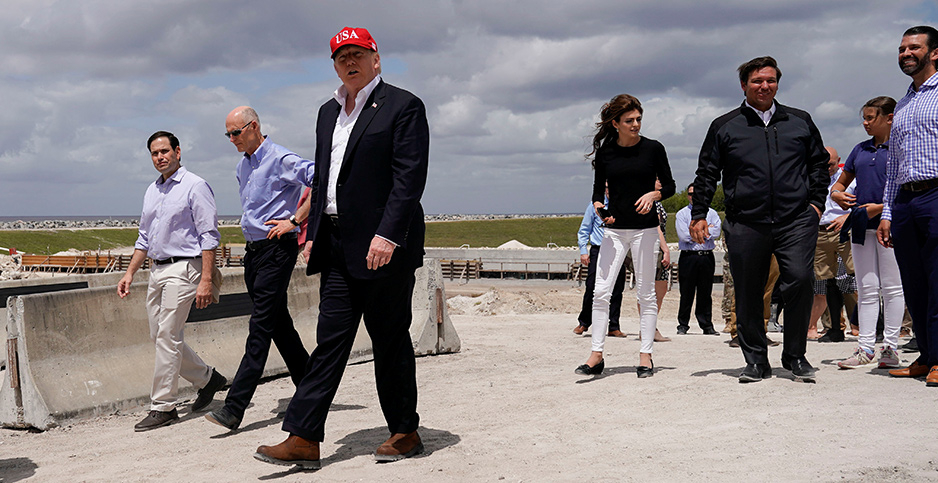 President Trump’s visit to the shores of Lake Okeechobee last week took him, once again, to the front lines of climate change.

The massive Florida lake last year experienced a particularly intense and monthslong algal bloom, killing countless fish and driving tourists away. It’s exactly the type of disaster that is expected to increase in the coming decades, according to NOAA.

Lake Okeechobee’s infrastructure also wasn’t built to accommodate the sea-level rise that scientists project the region will experience as a result of climate change. If the seas rise just another few inches, the drainage canals and system of moving water from the lake could be compromised, according to Andrea Dutton, a sea-level rise expert and an associate professor of geology at the University of Florida.

Trump promised that the lake and the Everglades will receive more attention from his administration. He said that more money was coming but didn’t commit to any specific amount.

He didn’t, though, tie any of the area’s challenges to global warming, focusing instead on the dike that surrounds the lake. A dam repair project that will cost more than $1.5 billion is currently underway; the project has become more pressing after unprecedented hurricane seasons (Climatewire, Jan. 7).

"We’re making it stronger than it would ever have been," Trump said Friday. "It’s really in great shape."

Trump has visited other sites deeply affected by climate change-influenced disasters without mentioning the overwhelming science that shows such events are more likely in a warming world.

For instance, he visited California last year after devastating wildfires killed dozens. Though climate change will create more ideal conditions for forest fires, Trump instead focused on "raking" the forest floor and blamed California Democrats for the tragedy. Walking among the embers of destruction, Trump — who has called climate change a "hoax" — pointedly told reporters that it didn’t change his opinion (Climatewire, Nov. 21, 2018).

"Florida has so much at stake, and some of the politicians are now trying to talk about addressing the problems, still without using the words ‘climate change,’" Dutton said, adding, "We can’t even begin to address this problem unless we can at least talk about it. We’re never going to be able to adapt if we can’t even have a conversation about it, and it’s not just the coastal areas of Florida."

Lake Okeechobee, the second-largest body of fresh water contained entirely in the contiguous United States, is essential to southern Florida and has boosted a robust agriculture industry. It’s also a water supply for cities. It provides flood protections for a large swath of the southeastern part of the state, helps combat saltwater intrusion on water supply and aids in pushing harmful algae blooms out of a nearby river.

It’s also the habitat for a commercial catfish industry and for sport fish, as well as the endangered Everglades snail kites.

But Lake Okeechobee is one of the shallowest large lakes in the world, making it particularly vulnerable to water evaporation. By the middle of this century, the area could see a spike in warmer weather. An additional 70 days with temperatures of 90 degrees Fahrenheit or above are expected by 2050 in South Florida, according to the National Climate Assessment.

Algal blooms are nothing new for the lake. But last year they covered 90% of its 730 square miles. According to scientists, the blooms are fueled by warmer water, as well as sewage runoff from development and fertilizer from farms.

"Harmful algal blooms, in general, are expected to increase in a warming world thanks to warming sea surface temperatures," NOAA researchers wrote in a report on the lake’s contributions to last year’s algal bloom. "Blooms may also start earlier and last longer into the year."

The Herbert Hoover Dike has added to the pressure on the ecosystem by diverting the natural flow of the Everglades for agricultural and development purposes.

The dike was built in the 1930s after two hurricanes tore through the lake in the 1920s, collapsing a smaller dike and killing more than 2,500 people, many migrant laborers. But the release of water from the dike last year helped fuel algal blooms and kill fish in nearby areas, causing health problems for residents.

More precipitation events, such as those predicated under some climate scenarios, could add to the lake, having the opposite effect of water evaporation. Intense deluges of rainfall would fill the lake, but higher temperatures and a lack of storms to replenish the water levels would be devastating for southern Florida, according to a University of Florida report.

"At this time it is not clear if the ecosystem services provided by Lake Okeechobee can be protected if climate change in future decades includes both increased temperature and less rainfall," Karl Havens, director of Florida Sea Grant at the University of Florida, wrote in a report on the effects of climate change on the lake. "The worst-case scenario underscores the fact that some changes caused by climate change are so extreme as to preclude adaptation. The larger goal of reducing the rate of climate change by cutting greenhouse gas emissions may in some cases be the only solution to avoid catastrophic outcomes."