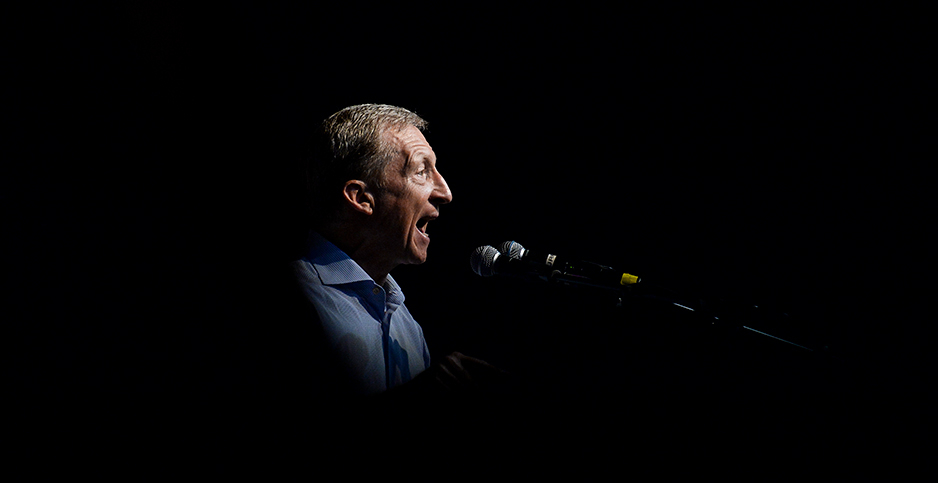 This moment should belong to Tom Steyer.

The billionaire liberal activist and long-shot presidential candidate has for years banged the drum on two specific issues: the need to address climate change and the need to impeach President Trump.

Both have received unprecedented attention this month.

For global warming, it’s come in the form of two presidential forums and an avalanche of competing Democratic climate plans. Impeachment, meanwhile, got a major boost this week with revelations that Trump leaned on Ukrainian President Volodymyr Zelenskiy to investigate the son of former Vice President Joe Biden.

Yet it’s unclear whether Steyer is in a position to capitalize.

Steyer managed to qualify for the next Democratic debate by amassing enough support in polls and fundraising. The Oct. 15 showdown in Ohio will be the first time Steyer has made the debate stage since he entered the race in July — much later than many of his rivals in the Democratic primary race.

"Going into that debate in October with a renewed focus on climate and on impeachment amplifies our ability to tell Tom’s story," said Benjamin Gerdes, a Steyer spokesman. "Tom deserves credit for being out on front of these things."

But he might be running out of time to make his case.

Steyer has been unable to break out of the basement in primary polls; a recent Quinnipiac University national survey put him at less than 2%. And his work on both climate change and impeachment often has been overshadowed by other candidates, notably Sen. Elizabeth Warren (D-Mass.).

"Warren was one of if not the first prominent Democrats to publicly back impeachment back in April," wrote Kyle Kondik, a political analyst and managing editor of Sabato’s Crystal Ball, in an email. "So that gives her credibility on this issue. From that standpoint, the events of the past few days certainly don’t hurt.

"Impeachment may also have the effect of removing some oxygen from the Democratic race, and candidates not named Warren and Biden need all the oxygen they can get. So I don’t think this helps Steyer or many others," he added. "Steyer can of course say ‘I told you so,’ although the response from many may be, ‘and who are you again?’

"I guess we’ll get to see in the October debate(s) whether he can make any noise," Kondik said.

The "I told you so" would come from Steyer’s past forays into politics. He founded NextGen Climate — later renamed NextGen America — which spent more than $233 million in the past three election cycles, according to the Center for Responsive Politics. Much of that money went to support Democratic candidates and causes, notably climate change.

In addition, he led the Need to Impeach campaign, which — as the name implies — tried to build support for impeachment proceedings against Trump while putting Steyer in front of the same voters he now needs to mount a primary comeback.

"Credit where due: @TomSteyer worked long and hard to build the baseline support for impeachment," wrote Bill McKibben, founder of the environmental group 350.org, in a recent Twitter post.

But pollsters and pundits warned that Steyer still has substantial hurdles to overcome, despite his personal wealth and past work on liberal causes. The Cook Political Report noted in a recent post that spending on the 2020 race is up compared with the 2016 cycle — largely due to Steyer.

"August of 2019 saw $8 million more in spending than August of 2015," wrote Kyle Roberts in The Cook Political Report. "It is worth noting that a great deal of this difference is attributable to Tom Steyer, who has spent $19.3 million since he entered the race — almost half of all spending for the field."

Because of that massive spending, Steyer "basically bought his way onto the debate stage," said Patrick Murray, director of the Monmouth University Polling Institute.

But he said Steyer still is struggling to find his constituency. At a recent climate forum hosted by Georgetown University, fewer audience members showed up to see Steyer than for entrepreneur Andrew Yang and Mayor Pete Buttigieg of South Bend, Ind.

If someone is a Democratic voter following health care or climate change, Murray said, "you already have plenty to choose from — you don’t have to go to some untested guy who hasn’t been in office before."

Gerdes, of the Steyer team, said the campaign has taken steps recently to raise Steyer’s profile on his signature issues. That includes "more impeachment ads online" and appearances by Steyer in New York City to coincide with climate activities there.

"It’s important to recognize Tom’s history on this," Gerdes said.