It’s teatime in the Arctic, but there’s no Google 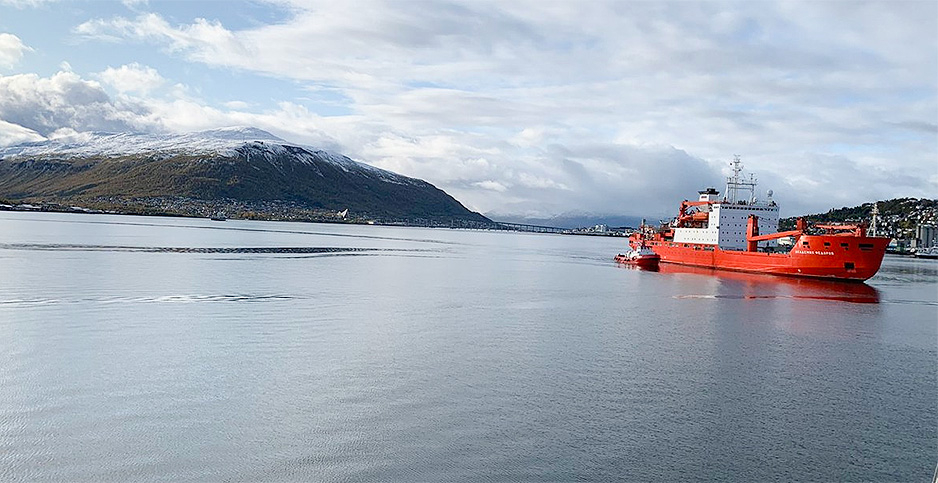 ON BOARD THE AKADEMIK FEDOROV, Barents Sea — For a few moments at the start of each day, there’s nothing but the gray morning light and the sound of waves. Then a voice crackles over the intercom in rapid Russian, jolting us fully awake.

"Dobroe utro," I hear — one of the few phrases I’ve managed to memorize so far. "Good morning."

So begins each day on the Russian research vessel Akademik Fedorov, home for the next six weeks. Gregory, the equivalent of first mate, appears on the ship’s intercom every day to sound the wake-up call. We emerge bleary eyed from our bunks, steadying ourselves against the rolling of the ship. We briefly weigh the allure of extra sleep against the rumbling in our stomachs — then we don sweaters and shoes for the walk downstairs to breakfast.

Akademik Fedorov launched from the port at Tromsø, Norway, on Saturday morning and has been making steady progress since. We’re currently chugging through strong currents in the Barents Sea at a speed of about 9 knots (faster on a good day) on our way to rendezvous with the German icebreaker Polarstern — centerpiece of the MOSAiC Arctic expedition — at the edge of the Arctic sea ice.

What’s on the menu: A typical day

Mealtimes become the center of social activity, the only times each day all 80 or so expedition participants are in the same place and able to freely chat. We memorize each other’s names and areas of expertise, swap travel stories and bond over everyone’s collective dislike for the breakfast porridge.

Boris, the ship’s IT specialist, has rigged a precious WhatsApp connection that opens for two hours each evening. At 8 p.m., the common room crowds with participants eager to send messages back home. Others assemble at the long tables in the dining hall after dinner for rowdy games of cards ("Snerts," a kind of high-energy, competitive Solitaire, is the current ship favorite).

There’s an air of expectation that grows each day as we journey farther north. A screen in the dining hall displays our coordinates in real time, and we cluster around it at breakfast to survey our progress.