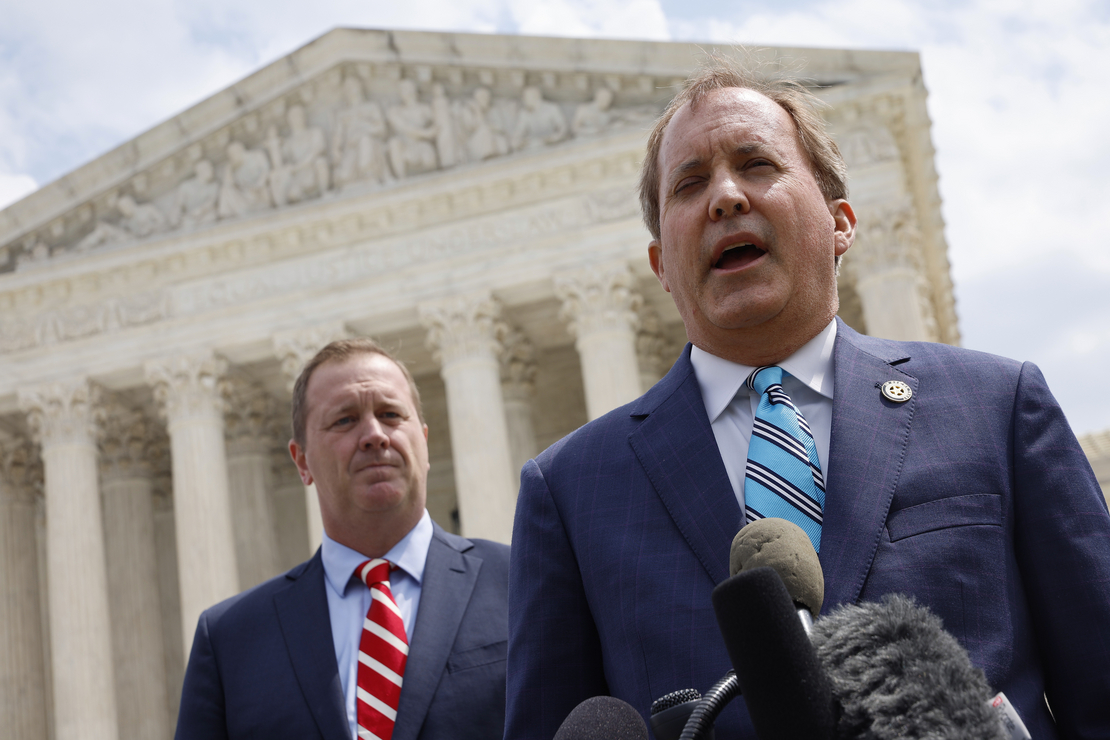 Texas Attorney General Ken Paxton, right, filed a legal challenge to EPA and the Army Corps of Engineers' definition of which waterways and wetlands are subject to federal permitting requirements. Chip Somodevilla/Getty Images

Red states are preparing to slug it out in the courts over one of the Biden administration’s signature environmental rules.

Texas Attorney General Ken Paxton announced Wednesday he filed a challenge against the new EPA and Army Corps of Engineers definition of which waterways and wetlands are subject to federal permitting requirements.

“Legal action is necessary to curtail this Administration’s continued intrusion into the rights of Texans and our ability to control our own natural resources,” Paxton said in a news release. “I’m proud to file this lawsuit challenging Biden’s WOTUS rule and remain committed to pushing back against the Biden Administration’s radical climate agenda.”

“It’s time to start suing,” said Texas Railroad Commissioner Christi Craddick during an agency meeting. “I think the AG’s going to have a good time with this one.”

EPA and the Army Corps unveiled their definition of waters of the U.S., or WOTUS, on Dec. 30, but the new rule wasn’t published in the Federal Register until Wednesday. The publication of the regulation triggers a 60-day deadline for lawsuits before the rule takes effect in March.

Challenges to the WOTUS rule are expected to land in multiple federal district courts across the country.

The Biden regulation aims to strike a middle ground between the Obama administration’s expansive Clean Water Rule and the Trump-era Navigable Waters Protection Rule, which significantly narrowed the set of streams and wetlands that qualify for federal protection.

Both the Obama and Trump WOTUS rules faced hurdles in court. Texas was among the states to support the Trump rule and challenge the Obama regulation.

“It’s disappointing that the Biden administration is doubling down on this overreaching policy,” Burgum said in the statement. “The EPA’s reworked version of WOTUS has the same problems as its predecessor, violating landowner rights and creating confusion for farmers, ranchers and industry by adding red tape and erroneously classifying almost every stream, pond and wetland as a federally managed water.”

Litigation over the Biden administration’s WOTUS rule will launch as the Supreme Court is preparing to rule in a case — Sackett v. EPA — that has the potential to limit the reach of the Clean Water Act (Greenwire, Jan. 24, 2022).