‘I’ve always considered myself to be an environmentalist’ 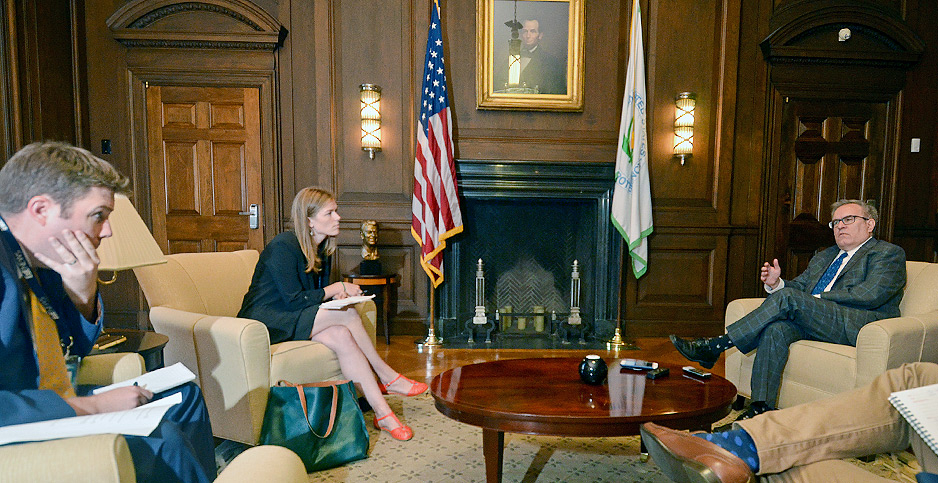 Andrew Wheeler, who took over as acting EPA administrator Monday after Scott Pruitt resigned the top job last week, has sparred with environmentalists in his former roles as a coal lobbyist and a longtime staffer to Republican Oklahoma Sen. Jim Inhofe.

But he’s quick to wear the label.

"I’ve always considered myself to be an environmentalist," he told E&E News today in an interview in his third-floor office at EPA headquarters. "I go hiking, I go camping, I’ve always done that. My favorite job I’ve ever had in my life was being the nature conservation director at a Boy Scout summer camp when I was in college in Ohio."

So far, that’s been Wheeler’s favorite job, he said, "although it only paid $1,000 for the entire summer." He added, "I’m reserving judgment on this job to see if this will be my new favorite."

He said he doesn’t have any political aspirations: "I haven’t thought beyond being acting administrator."

Wheeler keeps a Magic 8 Ball on the coffee table in his new office. He says he consults it when he needs answers.

Many of the walls are still bare after Pruitt’s belongings were removed. Wheeler’s frames are wrapped in plastic and leaning against the wall. Among them, he’s got a sheet that tallies the roll call vote that was taken in the Senate when he was confirmed as Pruitt’s deputy administrator on April 12. Three months later, he moved into the EPA chief’s office after Pruitt’s abrupt departure. As for his new title, he suggested "Andrew." Some of his staff call him "Administrator Wheeler."

His early speeches and interviews have suggested that he plans to steer EPA along the same deregulatory path that President Trump and Pruitt laid out. But he suggested today he’s open to making at least some tweaks around the edges on some of Pruitt’s policy proposals.

And while he steers clear of criticizing his predecessor, he’s stated that he wants to boost transparency at EPA and make inroads with some of the career staff that have felt spurned by the Trump administration.

One of the early moves he made was to open a hallway that runs past the administrator’s office and connects EPA’s north and south buildings. It had been shut under Pruitt, which angered some career employees.

"I intend to keep it open," Wheeler said today. "I guess it was probably in one of your publications, I read an anonymous EPA employee complaining about that a few weeks ago in an article, saying how they used to walk through it all the time, and if they had outside visitors, they would show them the hallway. I was going to talk to Administrator Pruitt about it, but when I took over, I just went ahead and opened it up, because it should be open. Employees should be able to walk through there."

As for agency scientists who have felt alienated by the Trump administration, Wheeler said, "I’m telling them every day that I value their work."

On questions about retaliation against EPA employees who criticized Pruitt’s spending and management, Wheeler said he hasn’t examined those issues. But, he said, "I take accusations of retaliation very seriously, and I would want a full investigation of those."

Wheeler suggested he would continue to pursue some of Pruitt’s most contentious policy priorities at EPA, like overhauling science advisory boards, requiring data used in rulemaking to be publicly accessible, and repealing and replacing President Obama’s Clean Power Plan, he said today, although he said he’d be looking at them carefully.

And he said he’s being cautious about avoiding conflicts of interest, even as he’s coming under fire for his lobbying career with the coal giant Murray Energy Corp.

Wheeler hasn’t used the soundproof booth that Pruitt installed in the administrator’s office, he said today. Pruitt came under fire for the hefty price tag of the booth.

"It would be expensive to tear it apart, I don’t see any sense in tearing it apart," Wheeler said. "And in this day and age, I don’t know what the assessment was for the need of it. I did look into the cost of the booth after I got here."

It looks "like a phone booth," Wheeler said. "It is in a storage closet, and it does not look that impressive."

Click here to read a full transcript of the interview.