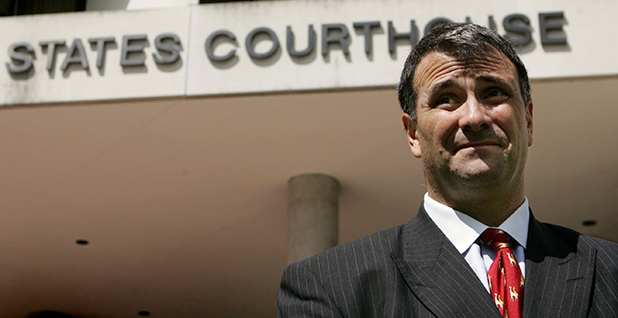 A Federal Election Commission filing shows the group was created earlier this month by Liz Curtis, a self-described "political compliance consultant" based in New Jersey. She is also listed as the group’s treasurer and recordkeeper.

Abramoff’s new position with the Protect American Values PAC appears to be somewhat of a return to form for the lifelong conservative. Abramoff got his start in politics as chairman of the Massachusetts Alliance of College Republicans, while he was an undergraduate at Brandeis University. In that role, he organized student volunteers for Ronald Reagan’s 1980 presidential campaign.

"[Rep.] Alexandria Ocasio-Cortez wasn’t even in diapers when I started fighting the Left, and I’m about to teach her and her cronies a few things they are going to wish they never learned — and it won’t just be a math lesson," he said. Abramoff was referring to the Democratic socialist from New York, who was born in 1989 and introduced the "Green New Deal" climate resolution (H. Res. 109).

When he left federal prison owing $44 million in restitution, Abramoff initially began preaching the need to break the link between lobbying and campaign cash. That included penning the book "Capitol Punishment: The Hard Truth About Washington Corruption From America’s Most Notorious Lobbyist."

Abramoff also met with good-government advocates he had long opposed. He told reformers that he believed government would work better if "no lobbyist, or someone gaining something from Washington that the rest of us don’t have, basically a special interest, can give any money politically," NPR reported at the time.

Abramoff’s return to lobbying prompted lawmakers to pass the Justice Against Corruption on K Street Act, or JACK Act (S. 2896). Enacted in January, the law from Sen. John Kennedy (R-La.) would require convicts like Abramoff to disclose their criminal history when they re-register to lobby.

Abramoff may have also helped facilitate the transfer of money between South Dakota conservative consultant Paul Erickson and Maria Butina, who recently pleaded guilty to conspiracy against the United States. Both Erickson and Butina have been linked to the special counsel’s Russian investigation and hit with federal charges.

In 2017, Erickson sent two wires for $15,000 to a California company established by the son and brother of Abramoff, according to BuzzFeed News. Bank investigators reportedly flagged it as a possible shell company established to hide Jack Abramoff’s interests.

Money in politics watchdogs are likely to keep a close eye on the Protect American Values PAC to ensure it isn’t mainly used to benefit Abramoff. At this early stage, it’s difficult to tell whether the committee is a legitimate political action committee or a so-called scam PAC, a group that claims to be raising money for political campaigns but spending little to none of its proceeds on politics.

"Super PACs are intended to be for outside expenditures around candidates and parties," said Lisa Gilbert, Public Citizen’s vice president of legislative affairs. "If we found out that instead it was paying his salary, which he was in turn using to pay off his debt, that would be a big problem."

"People are of differing opinions about whether his conversion to good-government reformer was sincere or not," she said. "Taking it most charitably, if you would think that it is, this particular scenario that we’re outlining certainly would be a bridge too far. And if we think he isn’t, maybe he’ll try to push the envelope and get away with more."

"After they read this letter, the Fake news media and their friends on the Left (especially the Congressional Democrats) will start attacking me personally — but I’m ready for them," he said. "In fact, I am encouraging them to spend time targeting ME, Jack Abramoff, instead of our conservative candidates, who need to focus on retaking the House and keeping the Senate."