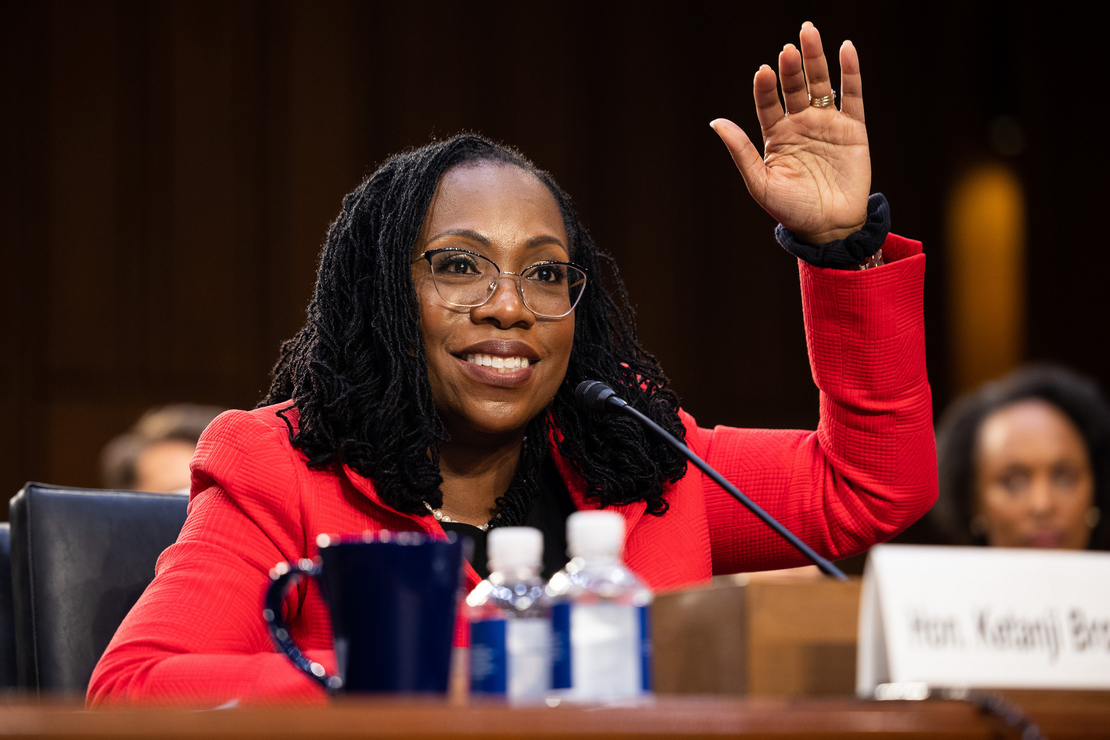 Judge Ketanji Brown Jackson this morning repeatedly emphasized the limited role she would have as a Supreme Court justice as Republican lawmakers sought to connect her nomination to dark money influences.

During the second day of her confirmation hearings before the Senate Judiciary Committee, Jackson, 51, was grilled by South Carolina Sen. Lindsey Graham about how she would apply the Constitution to modern policy questions on important issues — such as climate change.

“All I can say is the fact that so many of these left-wing radical groups that would destroy the law as we know it, declared war on Michelle Childs and support you is problematic for me,” said Graham, who was one of three Republicans last year to vote for Jackson’s nomination to the U.S. Court of Appeals for the District of Columbia Circuit.

Graham had backed Childs — a federal district judge in South Carolina whom President Biden last year tapped for an opening on the D.C. Circuit — for the Supreme Court vacancy created by Justice Stephen Breyer’s retirement this summer.

He suggested yesterday that Childs had fallen victim to partisan attacks by groups like Demand Justice — claims that other lawmakers refuted as they noted the role of the Federalist Society in helping former President Trump add record numbers of judges to federal courts (E&E Daily, March 22).

Sen. Sheldon Whitehouse (D-R.I.), long a critic of dark money and the Federalist Society, today expanded his rebuttal of Republican accusations by going into detail about GOP-aligned pressure groups working on judicial nominations.

“There is a drastic difference between rooting for somebody and controlling the turnstile that decides who gets on the court,” said Whitehouse, comparing liberal and conservative judicial advocacy organizations.

Earlier today, Graham asked Jackson to describe her judicial philosophy in light of the concerns he raised about the support she has received from progressive groups.

“My judicial philosophy is … to rule consistent with the limitations on my authority as a judge,” said Jackson, who has served for nearly a decade on federal district and appeals courts in Washington.

Jackson this morning declined to give a name to her judicial philosophy and instead described a three-step approach involving clearing her mind of preconceived notions, closely examining the arguments and analyzing the text of the applicable law.

“So you wouldn’t say that you’re an activist judge,” Graham said.

Jackson responded: “I would not say that.”

“And Michelle Childs has been nominated by President Biden to be a circuit judge and should be considered by this committee as quickly as possible,” Durbin said.

Judicial philosophy has been a major focus of questioning by Judiciary Committee members as they consider Jackson for a lifetime appointment on the nation’s highest bench.

Jackson, a Harvard College and Harvard Law School graduate, would be the first Black woman to be a Supreme Court justice. Prior to serving as a federal judge, she worked in private practice, served as a federal public defender and was a member of the U.S. Sentencing Commission. Jackson also once clerked for Breyer and is widely expected to be confirmed to the high court.

Jackson sought to assure Judiciary Committee members that she would view her role as a Supreme Court justice as a limited one.

Supreme Court justices — including conservatives like Neil Gorsuch — have faced criticism from GOP lawmakers for their application of judicial philosophy to support broad constitutional rights. In one notable 2020 ruling, Gorsuch used textualism — the process of reading the plain language of a statute — to vote in favor of workplace protections for employees in the LGBTQ+ community.

Some legal observers speculated at the time that Gorsuch could use the same approach to take a similarly expansive view of climate regulation (Climatewire, June 18, 2020).

“I am acutely aware that as a judge in our system, I have limited power, and I am trying in every case to stay in my lane,” Jackson said.

Jackson also had an opportunity this morning to respond to criticisms yesterday by Sen. Josh Hawley (R-Mo.) and other lawmakers that she has been soft on criminal sentencing, including in child pornography cases — claims a New York Times fact check deemed “misleading.”

“In every case, when I am dealing with something like this, it is important to me to make sure that the children’s perspective, the children’s voices are represented in my sentences,” she said.

Jackson later added that she tells defendants at sentencing “about the adults who are former child sex abuse victims who tell me that they will never have a normal adult relationship because of this abuse. I tell them about the ones who say, ‘I went into prostitution; I fell into drugs because I was trying to suppress the hurt.’”

Sen. Chuck Grassley of Iowa, the top Republican on the Judiciary Committee, pressed Jackson to say whether she favored adding more Supreme Court justices to the bench.

Progressive groups have called to expand — or “pack” — the court after former President Trump was able, with the help of Republican Senate leaders, to nominate three justices in four years and cement a 6-3 conservative majority on the Supreme Court.

Grassley responded that sitting Supreme Court justices — including Breyer and the late Ruth Bader Ginsburg — have publicly criticized proposals to add more members to the court.

“Respectfully, senator, other nominees to the Supreme Court have responded as I will, which is that it is a policy question for Congress,” Jackson said. “And I’m particularly mindful of not speaking to policy issues because I am so committed to stay in my own lane of the system.”

Jackson, who would be one of just three liberals on the Supreme Court and is likely to find herself in the dissent in many high-profile cases, said she would follow in Breyer’s footsteps as a consensus-builder on the bench.

“It’s very important … to try to find common ground, and Justice Breyer was such a wonderful role model for that kind of ability as a Supreme Court justice,” Jackson said.