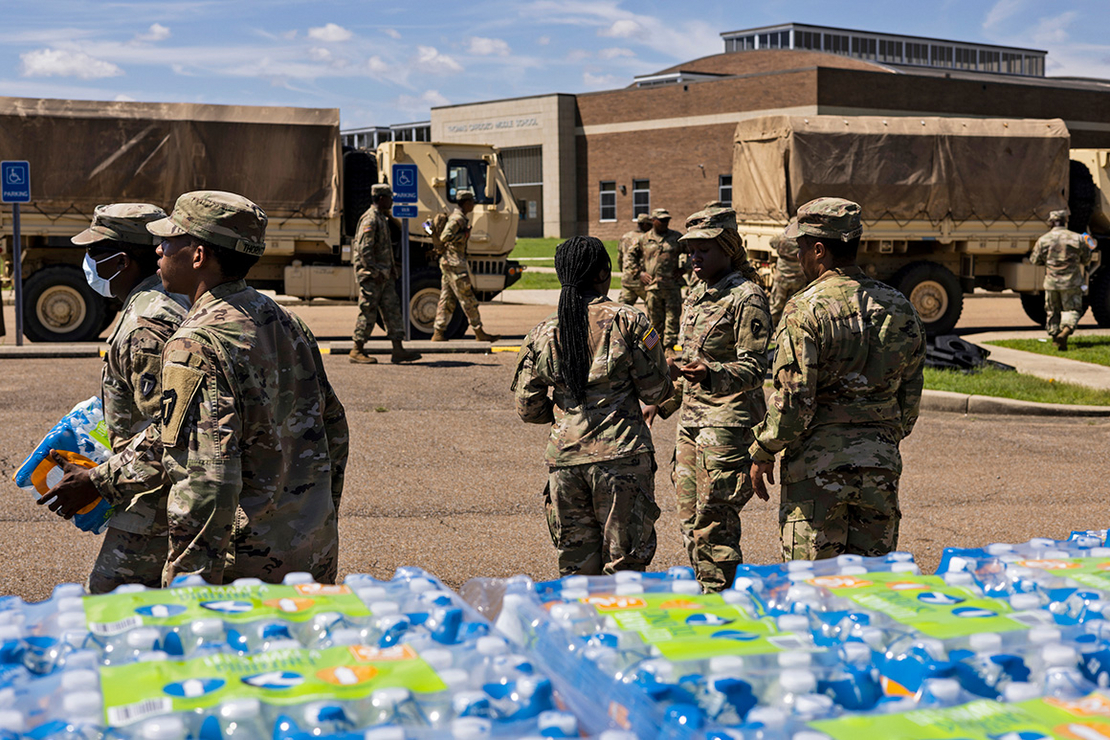 Members of the Mississippi National Guard are pictured handing out bottled water at Thomas Cardozo Middle School in Jackson, Miss., on Sept. 1 in response to the water crisis. Brad Vest/Getty Images

The struggle in Jackson, Miss., to provide clean and safe drinking water is reinvigorating debate over whether cities should turn to private companies for help with ailing water infrastructure.

Management and upkeep of sprawling and aging water systems have taken on increased prominence as problems and impacts tied to climate change — from flooding to severe storms — rise. The issue is also front and center as the Biden administration pushes states to ensure infrastructure dollars are reaching underserved communities that need them most (Greenwire, May 18).

“This is becoming a chronic problem, and we’re not going to grant our way out of it; the federal government is not going to be able to allocate the needed capital to fix these problems,” he continued.

Environmental justice and civil rights advocates say underserved communities like Jackson are at risk of seeing higher rates and less transparency under private ownership, and cities and towns are most appropriate for managing those systems. According to EPA, federally regulated public drinking water systems and delegated states and tribes provide drinking water to 90 percent of Americans.

Proponents of privatization counter that firms with engineering and financial know-how should be given more consideration in light of a growing string of crises that have rocked major urban hubs.

Discussion about a private company taking ownership is at play in Jackson, Mississippi’s state capital and largest city, which was recently beset by an outage of safe drinking water after the city’s beleaguered O.B. Curtis water treatment plant was overwhelmed by floodwaters from the bloated Pearl River. Though a boil-water notice in the city has been lifted, more than 150,000 people went weeks without safe drinking water.

Mississippi Gov. Tate Reeves (R) has said privatization is “on the table,” but Jackson Mayor Chokwe Antar Lumumba at a town hall meeting last week pushed back, emphasizing that private companies aren’t taking over water systems to be “benevolent” or to help cities like Jackson, but to make a profit. Lumumba also warned that rates would increase and transparency would be curbed.

“When you’re in a situation where you’re going through trauma, you don’t want to reach for something that is more harmful for you than where you already are,” said Lumumba. “That’s why we’re against privatization.”

Democratic Mississippi Rep. Bennie Thompson, who chairs the House Homeland Security Committee and whose district includes a large swath of Jackson, has accused the state’s Republican leadership of standing in the way of federal funds from reaching the majority-Black city (Greenwire, Sept. 2).

Thompson in an interview said the city should continue owning its water system, but that there’s a question about whether Jackson has the capacity to operate and maintain the plant, adding that the city has “not in the last few years been able to operate the system consistent with the Safe Drinking Water Act.” As for managing the plant, Thompson said there’s a lack of confidence in both the city and the state of Mississippi, which failed to provide sufficient funding to operate the O.B. Curtis water plant.

“What’s required would be for someone who’s in this business, who does it for a living on an interim basis, to operate and maintain the water system while training the city of Jackson as an owner to one day transition back to operation and maintenance,” he said. “But right now, as of this situation, that capacity is not there.”

‘Money is going to solve that’

Privatization and the push for affordable water has emerged as a lightning rod in the water world as systems across the nation grapple with aging infrastructure, climate change and public health crises like Covid-19.

Whereas a public water system is usually a nonprofit entity managed by local or state governments for which rates are set by a governing board, private water systems can be for-profit and managed by investors or shareholders, according to a blog post from the University of North Carolina, Chapel Hill’s Environmental Finance Center.

In recent years, private companies have come under fire for their role in the Flint water crisis that began in 2014, as well as in cities like Pittsburgh, Pa., both of which have struggled with elevated lead levels in drinking water. The city of Baltimore in 2018 became the first to outright ban water privatization, while Bucks County, Pa., recently halted what would have amounted to one of the largest sales of a water and sewer authority to a private entity.

Janice Beecher, director of Michigan State University’s Institute of Public Utilities, said crunching the numbers around rates in the water sector can be labor-intensive and difficult given the sheer diversity of systems, from small operations to huge regional operations.

But Beecher also said studies have shown that rates under privately owned systems are higher than those under their publicly owned counterparts.

“We should always be careful about overgeneralizing and oversimplifying (which are common in this area), but all other things being equal, the big differences are due to income taxes and the cost of capital,” said Beecher. “After that, I would say that overhead and spending propensities may play a relevant role.”

Whereas private systems have a strong incentive to invest for profit, some people believe that some public systems underinvest due to economic or political pressure, said Beecher. She also noted that changing ownership alters incentives and accountability.

Mildred Warner, a professor of urban planning at Cornell University, also said studies over the years have shown that private systems cost more. In 2010, Warner co-authored a study published in the peer-reviewed academic Journal of Policy Analysis and Management, which found no evidence to support assertions that privatization during the prior decades had generated efficiency gains or reduced costs of public service delivery.

Warner said Jackson is grappling with long-standing underinvestment in a complex system that has two types of water infiltration, as well as a ratepayer base that’s very low-income and needs subsidization from the state but hasn’t gotten that support. While privatization wouldn’t ease those problems, Warner said bringing in outside consultants could help the city assess what changes need to be made without losing internal operating knowledge.

‘Jackson is not alone’

At a House hearing today, Thompson said “Jackson is not alone” and that of the systems that violate federal drinking water standards, 40 percent serve communities of color. Studies show Black communities and other communities of color are more likely to suffer the brunt of natural disasters without receiving needed financial support, he said.

Mary Grant, the public water for all campaign director at the nonprofit environmental organization Food & Water Watch, said the situation in Jackson stems from years of state and federal disinvestment.

Jackson, she said, has been clear for years that it was on the “brink of crisis” and needed more investment, but that its rate base just couldn’t afford the increases necessary to support improvements to the O.B. Curtis plant. She pointed to the city’s loss of population as white residents moved away in the face of school integration.

“That’s the historical context the situation in Jackson needs to be grounded in,” she said.

Abre’ Conner, director of environmental and climate justice at the NAACP, said the state of Mississippi needs to ensure federal and local dollars are flowing into Jackson so it can make critical upgrades to the water system, not privatization (Greenwire, Sept. 2).

“This perpetual disinvestment and creation of obstacles is really only a precursor of what we probably can imagine will happen if the state completely is able to have its hands in what happens in Jackson, Mississippi,” said Connor.

Yet proponents of privatization argue that Jackson exemplifies what can go wrong with publicly operated systems that lack adequate engineering capacity, investment know-how, and strong oversight from public utility commissions, a model that’s used in the private water sector.

They also argue that the financial needs are so great among public drinking water systems that more emergencies are likely to surface as systems age and break, and that the $55 billion tucked into President Biden’s infrastructure plan for water and wastewater won’t make a dent.

“At a national level, whether you’re on the one side of the aisle or the other side of the aisle, we can’t have these breakdowns in the water grid, whether it’s cyber-related or what I call this colossal failure,” said Powelson with the National Association of Water Companies. “I’d like to think the water industry, private and public, are guardians of public health … if you don’t invest and you don’t have proper regulatory oversight, this is what happens. It’s scary.”

“Get them out of the business or get them in some safe harbor so they don’t pollute people,” he said.