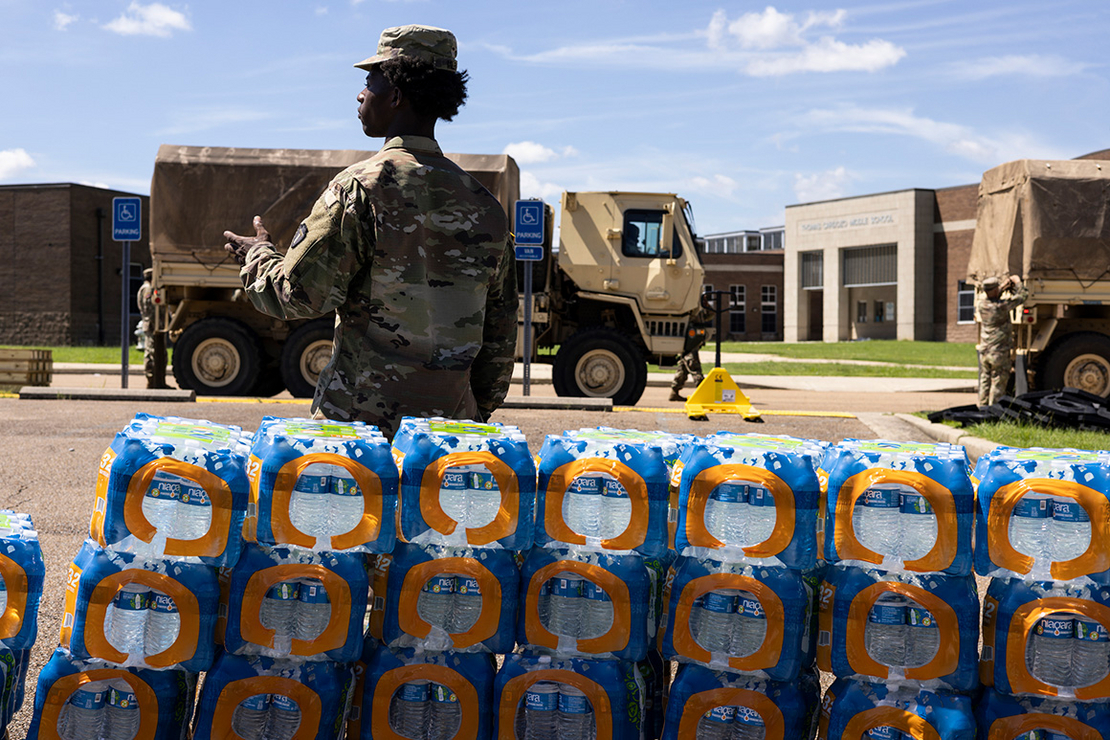 When President Joe Biden’s signature $1.2 trillion infrastructure plan moved through Congress last year, he pointed to Jackson, Miss., the state’s largest city plagued with long-standing water woes, as a community that stood to greatly benefit from a surge of fresh funding.

“Never again can we allow what happened in Flint, Michigan, and in Jackson, Mississippi — can ever let it happen again,” Biden said from the White House lectern.

But a top Democrat and the lone member of Mississippi’s House delegation to vote in favor of that bill now says that’s exactly what could happen if Republicans in his state don’t get on board.

Rep. Bennie Thompson, whose 2nd District in Mississippi includes a large swath of the city of Jackson, said during multiple television interviews yesterday that Mississippi Gov. Tate Reeves (R) and the state’s Republican leadership have stood in the way of federal funds from reaching the capital.

“What we have is a reluctant office of governor who decided that for whatever reason Jackson would be treated differently. That’s unfortunate, that was not the intent of the legislation,” Thompson said during an interview with Ana Cabrera on CNN, adding that he has a number of cities, counties and school districts that have benefited from both the infrastructure law and last year’s Covid-19 stimulus.

“My thought is, ‘Here is a godsend for the people of Jackson right when they really, really need it,’ and when the Legislature was in session and we thought some resources would be coming, they have not,” he continued.

The governor’s office did not immediately respond when asked for a comment.

This week, the city of Jackson has been plunged into a crisis after water plants there suffered from flooding and equipment failures that left about 150,000 people without reliable, clean drinking water (Greenwire, Aug. 31).

The crisis showcases how years of neglect and lagging maintenance at sprawling water systems in urban and low-income areas can culminate in dangerous situations for the general public.

The Biden administration has for months pushed to use money from the Infrastructure Investment and Jobs Act to target underserved communities, especially through the use of pots of money known as state revolving funds, which EPA distributes to states using long-established programs and formulas. States then oversee how the money moves out to various communities and projects, including drinking water and sewer upgrades, removing toxic lead pipes that deliver water to homes and businesses, and even removing contaminants like “forever chemicals.”

But EPA officials have been publicly clear that their authority over how that money is spent — and their ability to direct funds to vulnerable communities — is limited (Greenwire, May 18). Under federal law, states have the right to determine what constitutes a “disadvantaged” community and ultimately how to spend money that flows through state revolving funds being infused with cash from the $1.2 trillion infrastructure package Biden signed into law late last year, including almost $50 billion for drinking water and wastewater spending at EPA.

Jackson officials didn’t immediately respond when asked how much money they hoped to receive from the infrastructure package or whether the city, which oversees the water plant, had applied for federal grants or loans through the state revolving funds.

Jackson Mayor Chokwe Antar Lumumba has said it could cost $1 billion to fix the water plant in Jackson, but not everyone says that price tag is accurate.

Jackson City Council President Ashby Foote said the actual price tag to fix the water plant is $50 million to $80 million. “They’re working on it right now, but it’s not $1 billion to fix a water plant. … That includes a number that’s been thrown out there to fix our entire treatment system; that’s not the water system.”

While the state has retained money from the Covid stimulus American Rescue Plan Act, the city of Jackson stands to receive $42 million in ARPA funds along with matching state funds for infrastructure projects, said Foote. “We’ve been told we’ll get dollar-for-dollar matching for ARPA money spent on infrastructure,” he said. The city has also been approved for about $36 million in loans through the state revolving fund program, he said.

“It’s not that difficult once you get set up to get the funds, it’s just an administrative exercise,” Foote said of the SRF program. “You have to qualify for it.”

Thompson during the CNN interview said there is money available for Jackson in ARPA and the infrastructure act, but that the city is being treated differently because of its political and demographic makeup. Jackson’s population is 81.8 percent Black and 16 percent white, with a poverty rate of 26.9 percent, slightly higher than the rest of the state, according to the Census Bureau.

When asked why the city was treated unequally, the congressman responded: “Every other elected government around Jackson is Republican. Jackson is the only Democratic city that’s surrounded by Republican elected suburban officials. They have been taken care of.

“The majority of the money that we have sent from Washington, at this point, has gone to the suburbs and the inner city, the capital city, is being left out,” he added. “And that was not the intent of the legislation. We want to help everyone, especially those who need it the most.”

Thompson concluded by saying he’s hopeful for change after Reeves during a conference call yesterday said he was on board with helping the city as part of an all-hands-on-deck approach.

“You can’t be punitive to somebody just because they’re of a different party,” he said.

The situation in Jackson reflects a larger, national trend of drinking water systems aging and crumbling —and being unable to pay for the costs of upgrades and fixes. Federal regulators have also pinpointed maintenance and inadequate staffing as playing a large role in the city water plant’s challenges.

A report the American Society of Civil Engineers released last year, dubbed the “Report Card for America’s Infrastructure,” found that water mains break every two minutes in the U.S. and about 6 billion gallons of treated water is lost each day, enough to fill over 9,000 swimming pools.

But the same report concluded things could improve as federal financing like the state revolving funds and grants expand, and water utilities raise rates to reinvest in their networks.

Yet, despite those funding pots, systems continue to face gaps.

Only 21 percent of all U.S. utilities report being able to fully cover the cost of providing drinking water services, and only 20 percent of very large utilities and 10 percent of small utilities felt they will be able to provide full cost service in five years, according to the report.

What’s more, the report found renewal and replacement of aging water and wastewater infrastructure, as well as the financing for capital improvements, are the top two issues facing the water industry.

The White House has said the city of Jackson could dip into $450 million set aside in the American Rescue Plan Act for the state of Mississippi, including $20 million specifically for water.

The state is also slated to receive $75 million through the infrastructure law for the current fiscal year, about $19.4 million going directly into the general state revolving fund for drinking water in the form of grants, according to an agency memo. In addition to that is about $429 million for the state over the next five years.

But not all of those funds have been doled out, and it’s unclear how many would ultimately reach Jackson.

Dan Hartnett with the Association of Metropolitan Water Agencies, or AMWA, which represents metropolitan drinking water suppliers, said Mississippi is in line to receive $7.5 million in capitalization grants through the drinking water state revolving fund, according to an EPA announcement from May.

States must provide a 20 percent match to those allocations, and the money can pay for projects on the state’s list of priorities. States were expected to apply for these funds over the summer, with the expectation that capitalization grants will be awarded to states this fall.

While details continue to emerge about the situation at Jackson’s water plant, bipartisan pressure is mounting for the city to produce a plan for fixing the plant and moving forward.

“I think it’d be advantageous for the city to come up with a plan and share that plan with as many potential sources of help as possible,” Thompson told WJTV 12 News. “I think just saying we need help and not saying what that help entails is where the problem lies.”

What the congressman said he doesn’t want is any takeover of the city water plant.

“There are some talking about taking over the water system from the city of Jackson,” Thompson said during the CNN interview. “So, rather than work with the local elected officials, efforts have been underway to undermine those individuals who those 160,000-odd people who live here have elected, and all we want is for the governor and others to just work with us.”

Mississippi Lt. Gov. Delbert Hosemann, a Republican, said during a Wednesday interview with local radio station SuperTalk Mississippi Media that he’s in rare agreement with Thompson about the need for a plan.

“We don’t have a plan. Like the old saying, the first thing to do is to stop the bleeding, and we have personal and economic bleeding going on out here in Mississippi and Jackson, and this area serves over 200,000 people and … it’s not just a Jackson problem,” he said.

But Lumumba in a statement to the TV station said he plans to share “our fully-outlined plan — one that is supported by the expert advice of the U.S. Water Alliance and the Kellogg Foundation.” The city did not immediately respond when asked today about the status of the plan.

Hosemann is also floating his own approach and during the interview outlined various streams of money flowing into the state that could be used to help the plant, including $1.8 billion in federal funds coming to the Legislature.

“Also, the city can apply for grants from another $166 million coming for infrastructure projects,” he said. “There’s $44 million coming directly to the city — the largest amount for any city in the state — and there’s another $46 million going to [Hinds] County.”

Hosemann said he’s met with Reeves to discuss the potential for a special session but added that a plan or list of priorities is first needed for making repairs to the city’s water system.

“Who’s gonna do the plan? Is the city of Jackson going to propose one?” he asked. “They have not done so far as of this morning. Should we have some other entity, either a state entity, step up?”